July 21 (Reuters) - Unilever's (ULVR.L) first-half results should give a sign of how the consumer goods giant is coping with soaring commodity and transport costs - whether it has managed to lift prices without hitting sales volumes, or whether margins are being squeezed.

But Thursday's results will also be vying for an attention with an ongoing row over the decision of the group's American ice-cream brand Ben & Jerry's to stop marketing its products in the occupied Palestinian territories - a move that has sparked a backlash in Israel. read more

Analysts expect the Dove soap and Hellmann's mayonnaise maker to report a 1.2 percentage point drop in underlying operating margins from a year ago, according to a company supplied consensus.

Pantry stocking and a surge in eating-at-home during pandemic lockdowns last year allowed Unilever to cut back on marketing and store promotions, boosting margins. But soaring commodity costs for everything from plastics to tea and nuts in the first half of 2021 have put a question mark over its full-year goal to lift margins "slightly" from last year.

The company reported underlying operating margins of 18.5% in 2020.

Jefferies analyst Martin Deboo expects Unilever's commodity costs to have surged 9.8% in the first half, up from his initial forecast of 7.4%, due mainly to higher prices of plastics, ethylene oxide and palm oils used in manufacturing and packaging its beauty and personal care products. Raw material and packaging costs account for 40% of Unilever's overall sales.

"We continue to view 2021 as the year of most significant cost challenge to the industry since 2011," Deboo said.

While Unilever raised prices by 1% in the first quarter, in areas such as teas and high-inflation Latin American countries, analysts say the impact is expected to be felt only later this year, leaving it with a hefty first-half commodities bill.

Unilever is expected to raise prices further, but its initial hikes are already weakening sales volumes in countries such as Brazil, Morgan Stanley analysts noted in a research report earlier this month. Emerging markets, including Brazil, India and China, make up 60% of group sales.

"Whilst these higher input costs are known, the exact actual impact on margins will have been hard to estimate so poses an additional risk to coming results, not just for the impact of this quarter but also what it means for the second-half," said Tineke Frikkee, head of UK Equity research at Unilever shareholder Waverton Investment Management.

Despite the pressures, Unilever said in April it was confident of delivering full-year underlying sales growth within its mid-term target range of 3-5%, with the first half around the top of the range. read more

Some analysts are less bullish, however, citing suppressed consumption of ice-cream outside the home due to a cold April and wet May in northern Europe.

Before the pandemic, out-of-home ice-cream sales accounted for 8% of the group total, with the second quarter a big chunk of that. 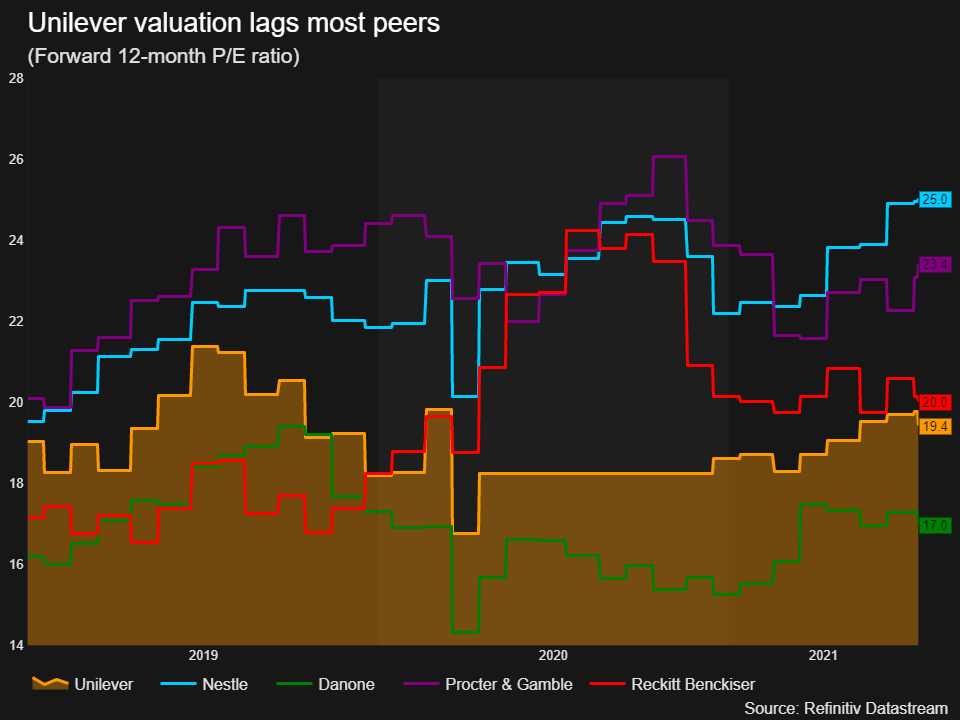 * H1 underlying operating margins are seen at 18.6%, down 1.2 percentage points.

* The stock, which rose 1% in 2020, is the weakest performer among consumer packaged goods stocks, including Nestle (NESN.S) and Procter & Gamble (PG.N), this year.

* The median price target is 48 pounds versus Tuesday's close of 43.2 pounds.

Additional reporting by Indranil Sarkar in Bengaluru Editing by Mark Potter
Disclaimer: The views expressed in this article are those of the author and may not reflect those of Kitco Metals Inc. The author has made every effort to ensure accuracy of information provided; however, neither Kitco Metals Inc. nor the author can guarantee such accuracy. This article is strictly for informational purposes only. It is not a solicitation to make any exchange in commodities, securities or other financial instruments. Kitco Metals Inc. and the author of this article do not accept culpability for losses and/ or damages arising from the use of this publication.