KPMG's banking audits not up to scratch, says UK watchdog

The Financial Reporting Council (FRC) said checks of 103 audits by KPMG, PwC, Deloitte, EY, Mazars, Grant Thornton and BDO from 2019 and 2020 showed nearly a third required improvement, only a marginally better outcome than in its previous annual survey.

The results pile more pressure on the government to propose legislation to change corporate governance and the audit market, as recommended in three government-backed reviews following the collapse of British retailer BHS and building firm Carillion.

"Inspection results at KPMG did not improve and it is unacceptable that, for the third year running, the FRC found improvements were required to KPMG's audits of banks and similar entities," the FRC said in a statement.

"KPMG has agreed additional improvement activities to be delivered this year over and above its existing audit quality improvement plan," said the watchdog, which did not disclose which specific company audits it had checked.

KPMG UK, whose major banking clients include Barclays, said the company was committed to delivering high-quality audits and was already working hard to make the necessary changes the FRC had highlighted.

"Whilst we know we have more to do to improve the inspection outcomes, our banking audits are robust and the findings do not call into question our audit opinions," Cath Burnet, KPMG UK's head of audit, said.

"We are confident that the steps we have taken to date will result in improvements in future banking audit inspections."

KPMG is also facing a hefty fine from the FRC for its auditing of Carillion.

The FRC said improvement measures were also expected at so-called challenger accountants BDO, which is headquartered in Belgium, and Mazars, which is based in France.

Deloitte, EY, Grant Thornton and PwC improved overall, with about 80% or more of audits requiring only limited changes, but the FRC said this score still fell short of its expectations.

EY said it was able to maintain audit quality standards despite challenges from the COVID-19 pandemic, but recognised it had more to do. 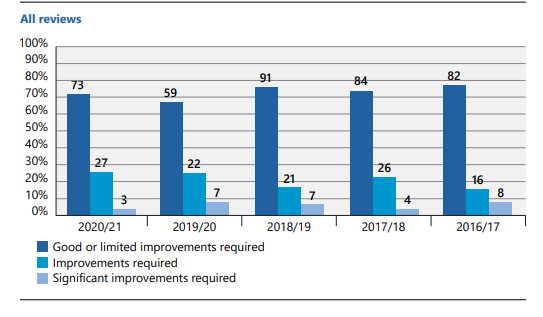 The ICAEW, a professional accounting body based in London, said the FRC audit check "has lost its way".

"It has become an exercise in compliance checking and the public admonishment of auditors, and it does little to improve audit quality, foster innovation or encourage new entrants into the audit market," the ICAEW said in a statement.

The FRC said the most common issues were in relation to revenue, impairment of assets, and group audit oversight.

Five of the nine BDO audits and three of seven at Mazars needed more than limited improvements, the FRC said.

Only 44% of BDO's audits required no more than limited improvements while the equivalent figure was 57% for Mazars and 59% for KPMG, the FRC said.

The government is pinning hopes on "challengers" to take on more auditing work at blue-chip companies and dilute the market dominance of PwC, Deloitte, KPMG and EY, known as the Big Four.

Mazars said it was disappointed with the findings in this year's FRC report and it was addressing the issues identified.

"We are fully supportive of the FRC's efforts in holding our sector to account, and in demanding improvements in the quality of audit work," said David Herbinet, Mazar's head of audit.

Scott Knight, BDO's head of audit, said it was working hard to address specific findings and investing in extra resources such as increasing it audit headcount by more than 250 people or 14% within the last year.

Government plans to force Big Four auditors to share blue- chip clients with challenger firms has faced a major push back from companies, which say limits on the Big Four's market share would work better.