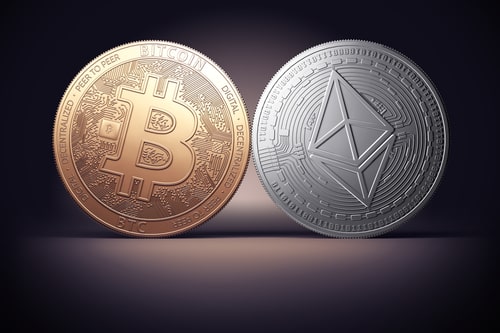 (Kitco News) The crypto rally has taken bitcoin above $40,000 for the first time since June, but ethereum might be the cryptocurrency to watch as Bloomberg Intelligence sees it outperforming bitcoin going forward.

The rally coincided with short sellers abandoning their positions and a new interest in bitcoin following reports that Amazon could get involved in crypto.

"Bitcoin roared back onto the headlines with a stunning rally to $40,000. Attributed to both short-covering but also because of ongoing speculation over Amazon's potential involvement in the crypto sector. The correlation with risk and/or Gold has completely fallen away, so long as it's $30-40K rangebound," said MKS PAMP GROUP head of metals strategy Nicky Shiels.

And we’re back above 40k #Bitcoin

The Amazon speculation started after reports cited a job posting from the retail giant, which said it was looking for a "digital currency and blockchain product lead."

"We're inspired by the innovation happening in the cryptocurrency space and are exploring what this could look like on Amazon," a company spokesperson told CoinDesk last week. "We believe the future will be built on new technologies that enable modern, fast and inexpensive payments, and hope to bring that future to Amazon customers as soon as possible."

This created a lot of excitement in the crypto space about Amazon potentially starting to accept bitcoin as payment.

On top of that, data from Bybt.com revealed that more than 950 million crypto shorts were liquidated on Monday.

A slight risk-off tone for US #markets to start the week with stock futures, yields, and oil lower--though nothing dramatic
More dramatic is the move up in #Bitcoin, currently trading above $38,000 as private sector adoption continues while the government pushback wanes somewhat. pic.twitter.com/Nt5KGBHpzb

Ethereum also posted impressive gains in this crypto rally, last trading at $2,319, up nearly 8% on the day after hitting a high of $2,431.

And while most of the attention is still being devoted to bitcoin, Bloomberg Intelligence is pointing out that ethereum can't be overlooked, projecting for prices to resume their rally to $4,000 — a more than 70% increase from the current price levels.

"Ethereum has been outperforming Bitcoin for about two years, and in the aftermath of the B-Word conference we expect more of the same. Our key takeaway from the July 21 event featuring a panel with Elon Musk, Cathie Wood and Jack Dorsey was Musk's acknowledgment that the No. 2 crypto is among his holdings. It's not new that Bitcoin's global adoption is in its early days, with an upward trajectory that's gaining momentum. Less known is Ethereum is beating out competitors and its rising status as the go-to platform for the digitalization of finance and money infrastructure," said Bloomberg Intelligence senior commodity strategist Mike McGlone. "The No. 2 crypto [is] building a base around $2,000 and Bitcoin doing similar at just above $30,000. We see probabilities tilted toward more price-appreciation resumption and for Ethereum to gravitate toward $4,000."

What makes ethereum so attractive is its use-cases in the crypto space, with the cryptocurrency carving itself as the "go-to crypto platform" when it comes to disruptive innovation in the finance space.

"The most widely traded crypto asset -- Tether -- is a prime use-case for Ethereum and supports the No. 2 crypto's rising price. Dipping to the lower end of the range at about $50 billion, the 30-day average volume for the world's benchmark digital dollar is more than 2x that of Bitcoin and is in an upward trajectory," McGlone said. "Unless innovation and related digitalization trends reverse, demand for and the price of Ethereum may keep rising. Uniswap is the world's largest decentralized exchange and operates on the Ethereum blockchain. Uniswap volume is about half that of Coinbase."

However, one thing to keep an eye on as the ethereum universe develops is new regulations and probes that could impact further expansion.

For example, the U.S. Department of Justice is now looking at whether Tether's executives committed bank fraud when establishing the digital token in 2014, Bloomberg News reported on Monday.

"Tether routinely has open dialogue with law enforcement agencies, including the DOJ, as part of our commitment to cooperation and transparency," the company said in a statement. "It is business as usual at Tether, and we remain focused on how to best serve the needs of our customers."