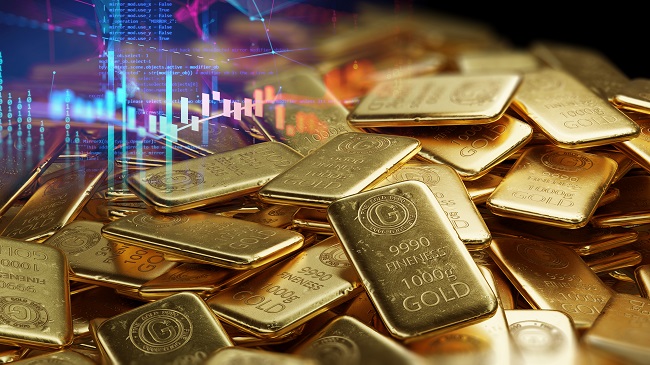 (Kitco News) - The gold market remains bound to its 200-day moving average. Still, instead of worrying about the day-to-day price fluctuations, one market strategist said that investors should pay attention to the long-term potential that gold offers.

In an interview with Kitco News, George Milling-Stanley, chief gold strategist at State Street Global Advisors, said that although some investors have been frustrated with gold's price action so far this year, the market is still holding up relatively well.

"Gold really comes into its own when you look at its long-term performance," he said. "Gold's historical promise is that it will enhance your returns and reduce your volatility. Gold improves your sharps ratio and that has to be the goal of every asset allocation in the world."

Milling-Stanley's comments come as gold price remains unable to move above its 200-day moving average above $1,830 an ounce. December gold last traded at $1,815 an ounce, relatively unchanged on the day.

Some analysts have noted that gold has struggled as the Federal Reserve talks about a plan to cut back its monthly bond purchase program and potential interest rates hikes in two years.

Milling-Stanley said that a lot of investors are misinterpreting the Federal Reserve's stance on monetary policy. He noted that since the June meeting, which caused gold's biggest selloff in years, Federal Reserve Chair Jerome Powell had reiterated the message that the central bank would be patient when it comes to shifting its monetary policy stances.

"Conventional wisdom tells you the higher interest rates, even if they're not coming until 2023, rates are bad for gold," he said. "The last time the fed was in tightening mode from 2015 to 2018, gold went up 21% despite nine rate hikes during that time."

Milling-Stanley said that despite gold's subdued performance since the start of the year, he is optimistic that prices can push back to $2,000 an ounce by the end of the year. As for what will push prices higher, he said that all the market needs is time.

"I don't think the gold market needs any new external catalyst to move higher," he said. "The market is doing just fine.

Milling-Stanley said that renewed physical demand from emerging markets could help drive gold prices higher; however, he added that he doesn't expect demand to pick up until October.

While gold could remain stuck in neutral for the next two months, Milling-Stanley said that instead of looking at returns, investors should look at gold's second role in a portfolio, which is reducing volatility.

With equity markets at record highs, it might be a good idea to have a hedge against volatility in a portfolio.