Bitcoin on track towards $100,000, gold price to rise along with crypto – Bloomberg Intelligence 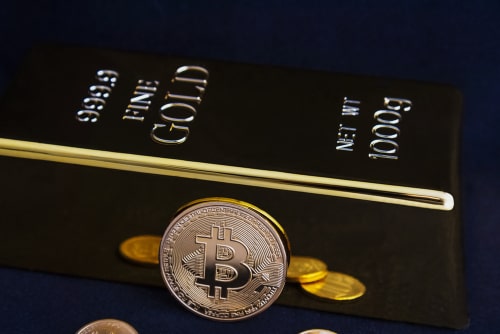 (Kitco News) Bitcoin has developed a new floor at around $30,000, and the cryptocurrency looks on track to resume its rally towards $100,000, according to Bloomberg Intelligence, which also sees gold rising alongside crypto.

"Bitcoin appears to have built a base around $30,000 that's akin to $4,000 at the start of 2019, and we see performance parallels that could get the benchmark crypto back on track toward $100,000," said Bloomberg Intelligence senior commodity strategist Mike McGlone.

"The longest period below its 20-week moving average since 2018-19 indicates weak longs have been cleansed within an enduring bull market. What's changed in about three years is sufficient to sustain more of the same for most of Bitcoin's history -- rising prices. Supply is declining while demand and adoption are rising in most countries that welcome open discourse and free-market capitalism," he said.

McGlone described China's crackdown on crypto, and the U.S. moves towards regulation as part of bitcoin's maturation process.

"The increasing dichotomy between China pushing back and the U.S adding clearer rules may mark part of a new and different kind of cold war. Countries restricting capital flows may fall behind in the digitalization process of money and finance," he pointed out.

Bitcoin is expected to resume its bull market later this year, and gold is projected to follow the cryptocurrency higher.

"Resurfacing deflationary forces indicated by declining U.S. Treasury bond yields and peaking commodities add underpinnings to gold and bitcoin. We see the digital and analog stores-of-value advancing together," McGlone said in his August outlook. "Bitcoin and gold are poised to follow the resumed upward trajectory of U.S. Treasury bond prices in 2H, we believe. Probabilities are rising that bearish 1H consensus will turn out to be temporary and provide an opportunity for more-enduring bull markets starting from a discount."

McGlone also suggests pairing exposure to gold with bitcoin in order to get better results.

"Bitcoin, gold and long bonds are top assets set to outperform in 2H, in our view. The fact that the metal and Treasury bond prices have been advancing for decades and recently dipped enhances their relative value, yet gold appears increasingly naked if not paired with Bitcoin," he said. "The crypto represents rapidly advancing technology pressuring inflation and supporting quantitative easing, which buoys the stock market."