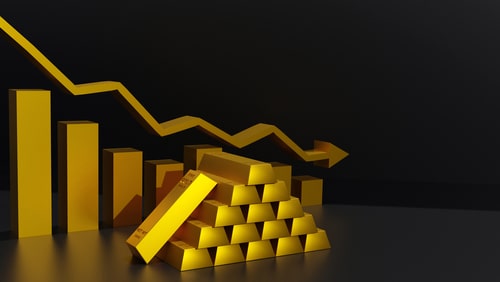 (Kitco News) Gold's failure to breach the $1,800 an ounce level puts it at risk of another significant selloff, according to analysts.

Even though gold was quick to stabilize above the $1,700 an ounce following a flash crash last week, there is not enough interest in gold to keep prices trending higher, said RJO Futures senior commodities broker Daniel Pavilonis.

"There is going to be more downside in gold, which is just sitting right on the downward trendline," Pavilonis told Kitco News. "The problem is that silver is just so weak, and I think gold will start to follow it. The next wave down would be to $1,670."

The main event next week is the Jackson Hole symposium.

"The headline discussion will be 'Macroeconomic Policy in an Uneven Economy,' but the main focus for markets will be the discussions surrounding what appears to be an impending tapering of the Fed's QE asset purchase program," said ING chief international economic James Knightley.

All eyes will be on the Federal Reserve Chair Jerome Powell's remarks, which will be delivered virtually on Friday morning.

"We are seeing the Fed at least talking about tapering in their minutes. It could lead up to a selloff for gold heading into Jackson Hole next week. The event might cause problems for equities as well."

Looking ahead, the Fed is unlikely to want to tighten its monetary policy too quickly, especially with the rising delta variant risk.

"The delta variant keeps getting worse. Australia is getting shut down again. In North America, we are not even in cold weather yet," Pavilonis noted. "But if the macro data keep on showing strong jobs numbers, I think the Fed will have to stop being so accommodative, and that might make the dollar stronger, and that can drag gold down."

It will all come down to the employment side of the Fed's dual mandate. The central bank is willing to ignore higher than expected inflation to order to see the much-needed job growth, TD Securities head of global strategy Bart Melek told Kitco News.

"No one is really quite excited about the U.S. economic data. We've seen retail sales, which is somewhat of a forward-looking indicator, come in below expectations. And it doesn't look like we'll get a huge amount of new fiscal stimulus any time soon," Melek said.

The U.S. economy might have a hard time getting back all the lost jobs. And this situation is not an easy one for the Fed.

"They might remove tapering, but monetary accommodation is here to stay for a long time, even if inflation moves above the Fed's target. The Fed will argue that their mandate to reach full employment is still intact, and so long as inflation doesn't surge too much, it will allow real rates to be low. And this is positive for gold moving into 2022," Melek described.

The $1,800 an ounce level remains a strong resistance point. Until the precious metal can start closing above it, gold is unlikely to gain much traction, said Pavilonis.

"We need to get back above $1,800 to turn this ship around. If we can't do that, we can start getting back to $1,670, which is the path of least resistance. And if we break through that low, all bets are off. It will be a capitulation moment," he stated.

Out of all the datasets scheduled to be released next week, the ones to watch will be the U.S. Q2 GDP numbers and the PCE price index, which comes along with personal income and spending indicators.

"The PCE is the big one to watch. It's the Fed's favorite inflation measure. If we have a stronger than expected inflation print, that would be bad for gold because it could force the Fed to tighten sooner rather than later. Also, I'm watching personal income and personal spending to see how the consumer is faring here," Melek said. "We are very likely to see somewhat weaker economic numbers, at least for the next little while, as the impact of delta variant slows things down a bit."

Here's the schedule for next week: