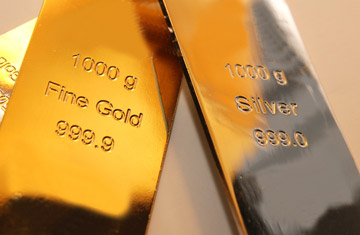 (Kitco News) -The silver market has been attracting new attention as the precious metal underperforms in the marketplace. However, many analysts have said that the metal is significantly oversold and due to a bullish correction.

In a report published Wednesday, commodity analysts at Metals Focus said that they remain bullish on silver as the metal's industrial demand continues to look bright.  They added that industrial demand, which makes up about 50% of the silver market, will provide some critical support for prices.

The analysts noted that silver's lackluster performance could be due to shifting expectations for weaker global growth as the world continues to deal with surging cases of the COVID-19 Pandemic. However, they added that they expect this to be a short-term driver for silver.

"In our view, however, we have retained our positive outlook for silver industrial demand, both this year and looking further ahead, even if the global economy does face several headwinds," the analysts said.

While the gold market has recovered from its recent flash crash, which sent prices briefly below $1,700 an ounce, silver has struggled to bounce off critical support levels. September silver futures last traded $23.60 an ounce, down 0.74% on the day.

The gold/silver ratio, while off its recent highs for the year, still remains elevated. Last trading at 75.76 points, meaning that it takes 75 ounces of silver to equal the value of one ounce of gold.

One of the reasons why Metals focus remains bullish on silver's industrial demand is because of how fast the global manufacturing sector bounced back after governments worldwide initiated strict lockdown measures last year.

"Even though the Pandemic continued to exact a heavy toll, industrial activity returned quite sharply as the year progressed. Although the second-half performance was not strong enough to compensate for the initial weakness, it ensured that the full-year decline in 2020 was not as pronounced as it might have been," the analysts said. "The H2.20 recovery has carried over into this year."

One central area of demand for silver continues to be in solar power generation. Silver is a critical component in photovoltaic (PV) solar panels. Metals Focus said that demand for solar power will only continue to grow, and it looks like thrifting of the precious metal has reached its limit.

According to their research, the number of countries installing at least 1giggawat of new PV capacity rose to 18 in 2020, compared to only 11 in 2018. "This shows how PV is gaining in popularity as low carbon strategies increasingly take center stage," the analysts said.

Another major sector to watch is the microchip sector, which has seen significant supply constraints after the global economy ground to a halt due to COVID. However, the sector is starting to see capacity grow as companies look to expand their inventories.

"Current lead times to secure semiconductors are currently around 20 weeks, which suggests that supplies will, at the very least, remain tight well into next year. In fact, our research contacts in the chip sector have suggested that their order books will remain strong at least until 2023, all of which will be supportive of higher industrial silver demand,"

"The outlook for industrial silver offtake, both this year and further ahead, looks bright; not only should newer areas thrust ahead, but established uses should also enjoy steady gains, in part as avenues for thrifting and substitution look limited. As such, we expect industrial demand to achieve successive highs over the short to medium-term," they said.