(Kitco News) - Famous hedge fund manager John Paulson might not be taking outside money these days, but he has plenty to say about the state of the markets. In an interview with Bloomberg, Paulson, who reached billionaire status on the heels of his doom-and-gloom call on the subprime housing market in 2007, didn't mince words when he said that he was "not a believer in cryptocurrencies." He went on to call the cryptocurrency market a "bubble," one whose value will eventually go to zero.

Even though bitcoin's supply is capped at 21 million coins ever to be mined, Paulson, whose firm Paulson & Co was shuttered last year and converted into a family office, took a shot anyway, calling the broader cryptocurrency market a "limited supply of nothing." He turned to the argument that as long as demand outpaces the supply, the price will rise, but when demand falters, the price will fall with it.

"There's no intrinsic value to any of the cryptocurrencies except that there's a limited amount," said Paulson to Bloomberg's David Rubenstein.

Since that the dollar is off the gold standard, however, its intrinsic value is similarly in the eye of the beholder. 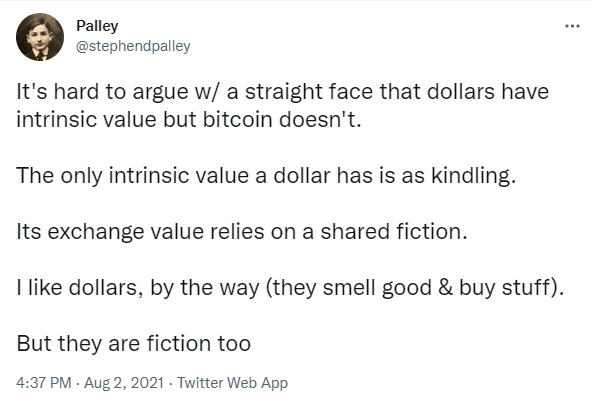 Despite Paulson's negative outlook on crypto, he's not looking to short bitcoin anytime soon the way he did the subprime market. In his view, crypto has "unlimited downside." In the near-term, however, he is willing to admit that he would be "wiped out" if bitcoin pulled staged of its classic bull runs. For example, bitcoin has been known to double in price in less than a month's time.

Paulson, however, is a fan of fundamentals. And while bitcoin's use case as both a store-of-value and payment method have been on the rise, the price can also move at the whims of Crypto Twitter.

For all his venom toward bitcoin, Paulson is equally bullish on gold. He has been for many years. For example, his fund flocked to the precious metal in the wake of the financial crisis. He has been patient with the precious metal, even suffering gold-fueled declines before deciding to pull the plug on running a hedge fund and instead focus on managing his own wealth.

Gold investors got the last word in 2020 when the coronavirus triggered the fear lever, and now Paulson believes the stars are once again beginning to align for the precious metal. While inflation has started to rear its head already, Paulson believes it is just getting started. He believes that inflation will climb higher than the estimates largely due to a rising money supply, and gold is poised to benefit.

According to Paulson, now is the time to buy gold, as the precious metal "does very well in times of inflation." He even harkened back to the 1970s when the gold price "went parabolic" in the face of "double-digit inflation."

Incidentally, Paulson likes the precious metal for some of the same reasons that he dislikes bitcoin, having brought up the "limited amount of investable gold" compared to that of the combined financial assets and fixed income. In the case of gold, the supply/demand situation should work toward gold's benefit.

The gold price is down about half a percent today and remains under pressure on the year.