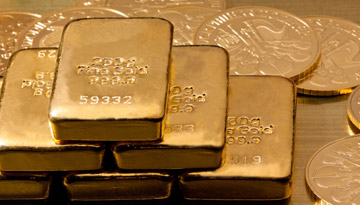 (Kitco News) - Although the gold price has recovered from its recent flash crash, it was enough to spook investors and drag down overall investment demand last month, according to the latest data from the World Gold Council (WGC).

In August gold-backed exchange-traded funds globally saw another month of outflows to the tune of 22.4 tonnes, valued at $1.3 billion, the WGC said in its monthly ETF report Thursday.

"Gold faced headwinds early in August as the dollar briefly strengthened and rising Treasury yields weighed on investment flows, triggering momentum selling shortly thereafter," the analysts said. "Despite a recovery in price in the second half of the month, the initial unexpected sharp early-hours selloff amid low liquidity conditions may have unnerved some investors, leading to reduced investment demand."

So far this year, 141 tonnes of gold has flowed out of the ETF market. Many analysts have noted that this trend needs to reverse soon if prices have a chance of reclaiming the $2,000 level by the end of the year.

"European inflows occurred against a backdrop of Eurozone inflation rising to its highest level in nearly a decade, while regional central banks cautioned that the economic recovery may be slower than expected due to COVID variant concerns," the analysts said.

Another continuing trend in the gold market is the growing demand for low-cost gold ETFs. The WGC said that this segment of the market saw investors inflows of 1.9 tonnes.

Low-costs ETFs have seen continuous growth so far this year with holding up 40%.

Although the gold market faces a challenging environment as central banks look to reduce their monthly bond purchases, analysts at WGC said they still see some supporting factors for the precious metal, including growing volatility in equity markets and persistently higher inflation pressures.

"Gold remains a valuable asset for investors looking forward, as weak equity returns in emerging markets and persistently high inflation reports will serve as tailwinds. September has been one of the strongest months historically for the price of gold, and this could present an opportunity for investors as we head into the fourth quarter of the year," said Adam Perlaky, senior analyst at the WGC in the report.

Although WGC analysts remain optimistic on gold prices through the end of the year, the precious metal has been unable to hold gains above $1,830 an ounce. December gold futures last traded at $1,794.20 an ounce, relatively unchanged on the day.