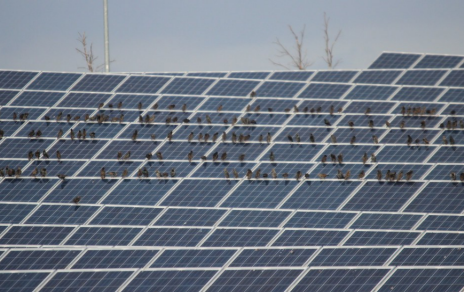 (Kitco News) - Along with Joe Biden's recent vaccination drive, the President also had some strong comments about the environment and the nation's impact on global warming. He said "This is code red," while visiting areas of New York and New Jersey hit by Hurricane Ida. The White House is now calling for solar energy to power nearly half of the electric grid by 2050. This seems like a tall order considering solar energy currently powers only 3% of the grid, but by 2050 that number can hit 45% according to the Department of Energy.

It has been no secret that a move to more solar power is part of the Biden administration's larger goal to decarbonize the energy industry. U.S. solar installations hit a record high in 2020, but yearly solar capacity additions will need to double annually through 2025 to keep up with capacity.

A study by the Biden administration and the larger plan is to have an emissions-free grid by 2035. Other zero-carbon energy sources, most notably wind, would account for the generation not supplied by solar.

Secretary of Energy Jennifer Granholm said "The study illuminates the fact that solar, our cheapest and fastest-growing source of clean energy, could produce enough electricity to power all of the homes in the U.S. by 2035 and employ as many as 1.5 million people in the process,"

In order to hit its goals, America needs significant developments. These will need to be made around grid flexibility, including energy storage, as well as transmission expansion. The infrastructure package passed by the Senate in August includes billions of dollars for clean energy projects, but several important points had been left out, including extending tax credits. However, this and other initiatives could still be included in the $3.5 trillion budget resolution approved by the House in August. Time will tell how this works out but the intention seems to be there to make a change.

According to Feeinenergy.com, Aluminium is used in the frames on the panels and on the cells themselves. Steel is often used for solar racking, the framework that attaches panels to roofs or to the ground. In 2018, an estimated 5.8 million tons of steel were used in US solar installations. Silver is the smallest component of a solar panel by weight but it is also the most expensive. These commodities will be a massive part of the push into the greener future and the demand vs supply chain should be monitored closely.