U.S. inflation coming off the boil as prices increase slowly in August

WASHINGTON, Sept 14 (Reuters) - Underlying U.S. consumer prices increased at their slowest pace in six months in August as used motor vehicle prices tumbled, suggesting that inflation had probably peaked, though it could remain high for a while amid persistent supply constraints.

The broad slowdown in price pressures reported by the Labor Department on Tuesday aligns with Federal Reserve Chair Jerome Powell's long-held belief that high inflation is transitory. Still, economists cautioned it was too early to celebrate and expected the U.S. central bank to lay out plans in November to start scaling back its massive monthly bond-buying program.

"Inflation remains troublingly strong, even if it is not exploding like it did earlier in the year," said James McCann, deputy chief economist at Aberdeen Standard Investments in Boston. "If we continue to see further step-downs in inflation over the next six months, that should ease the pressure on the Fed to quickly follow tapering with interest rate rises."

The consumer price index excluding the volatile food and energy components edged up 0.1% last month. That was the smallest gain since February and followed a 0.3% rise in July.

The so-called core CPI was held back by a 1.5% decline in prices for used cars and trucks, which ended five straight monthly increases. Robust rises in prices of used cars and trucks, as well as services in industries worst affected by the COVID-19 pandemic, were the key drivers behind a heating up of inflation at the start of the year.

Airline fares plunged 9.1% in August, likely as a resurgence in infections, driven by the Delta variant of the coronavirus, sapped demand for air travel. There were also decreases in motor vehicle rentals and insurance.

Stocks on Wall Street were trading lower. The dollar (.DXY) fell against a basket of currencies. U.S. Treasury prices rose. 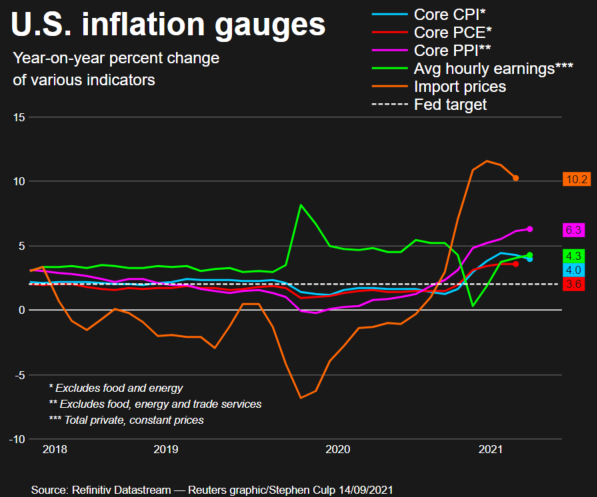 In addition to the price surge for used cars and trucks appearing to have run its course, hotel and motel accommodation prices are now above the pre-pandemic level, suggesting moderate gains ahead. Prices for hotels and motels accommodation fell 3.3% after shooting up 6.8% in July. Some of the price plunge was probably because of the soaring coronavirus infections.

But bottlenecks in the supply chain remain and the labor market is tightening, pushing up wages. There were a record 10.9 million job openings as of the end of July, forcing companies to boost wages as they compete for workers.

A shortage of homes is driving record house price gains and rents are going up as COVID-19 vaccinations allow companies to recall workers to offices, pulling Americans back to cities following a pandemic-fueled exodus to lower-density areas. These factors could contribute to keeping annual inflation higher.

Owners' equivalent rent of primary residence, which is what a homeowner would receive from renting a home, increased 0.3% in August, rising by the same margin for the fourth straight month.

"The biggest upside risk to inflation in the next six months is from the potential pass-through of higher house prices to the CPI shelter component," said Bill Adams, a senior economist at PNC Financial in Pittsburgh, Pennsylvania.

Prices for furniture and bedding rebounded 2.3%, while appliances accelerated 1.5%, underscoring the supply chain constraints. New motor vehicle prices rose 1.2%, marking the fourth straight month of gains above 1%. A global semiconductor shortage, worsened by the spread of the Delta variant in East Asia has forced auto manufacturers to cut production.

Consumers also paid more for apparel. The cost of healthcare rose at a tame 0.2% as a strong gain in prices for hospital services was offset by a decline in prescription medication. The cost of doctor visits was unchanged.

Some economists expect officials at the Fed will upgrade their inflation estimates when the U.S. central bank publishes its summary of economic projections at end of the Sept. 21-22 policy meeting. The Fed's preferred inflation measure for its flexible 2% target, the core personal consumption expenditures price index, increased 3.6% in the 12 months through July, matching the gain in June. August's data will published later this month.

The overall CPI rose 0.3% in August, the smallest increase since January, after gaining 0.5% in July. The food index increased 0.4%, slowing down after two straight months of hefty gains, as the cost of dairy products declined.

Prices for food away from home also moderated. Gasoline prices rose 2.8% after increasing 2.4% in July.

In the 12 months through August, the CPI increased 5.3% after soaring 5.4% on a year-on-year basis in July.

"Even with a slowdown in monthly CPI gains, big year-over-year increases will persist until well into 2022," said Chris Low, chief economist at FHN Financial in New York.

"The slowdown in sectors sensitive to the reopening is another piece of evidence for the transitory story of inflation, but steady increases elsewhere show that inflation should stick around even after those sectors adjust."

Reporting by Lucia Mutikani, Editing by Chizu Nomiyama, Paul Simao and Andrea Ricci
Disclaimer: The views expressed in this article are those of the author and may not reflect those of Kitco Metals Inc. The author has made every effort to ensure accuracy of information provided; however, neither Kitco Metals Inc. nor the author can guarantee such accuracy. This article is strictly for informational purposes only. It is not a solicitation to make any exchange in commodities, securities or other financial instruments. Kitco Metals Inc. and the author of this article do not accept culpability for losses and/ or damages arising from the use of this publication.