LONDON (Reuters) - Erratic and volatile, with positioning swinging from one extreme to another: a new norm is taking hold in the world's biggest debt markets which for years saw activity crushed by the hefty presence of central banks.

Bond-buying stimulus remains a powerful downward force on borrowing costs, with the balance sheets of six major central banks amounting to almost $30 trillion, from under $10 trillion in 2008, BofA estimates.

But unusually sharp swings in sovereign bond yields this year suggest that low volatility, something investors have become accustomed to, cannot be taken for granted.

Take the $22 trillion U.S. Treasury market, of which the Federal Reserve owns roughly 20%. Having held a net short position - essentially a bet on prices going down - for around 2-1/2 years, investors have since around June 2020, flitted in and out of net long and short positions.

For a graphic on Net positioning in the US Treasury market: 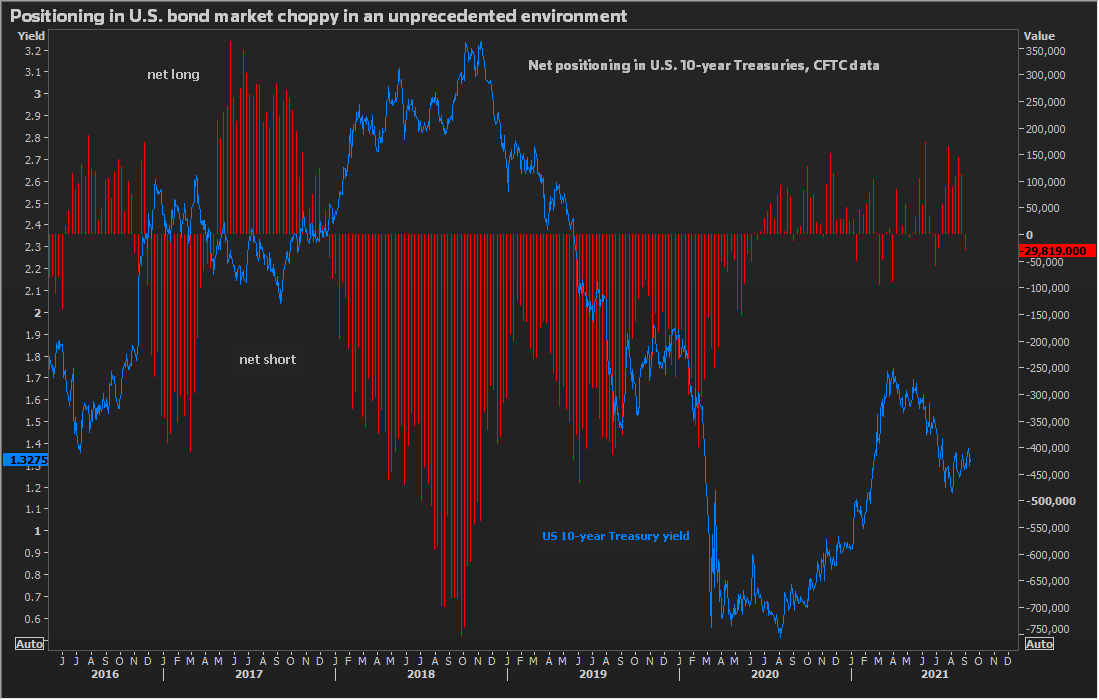 The price moves reflect perhaps the lack of clarity over what will follow the four-decade bond bull-run.

Treasury 10-year yields jumped some 60 basis points in the six weeks to late-March, peaking at 1.78%. They then tumbled almost to 1% in July, before rising back above 1.3% in August..

"Fixed income investors are meant to be the boring investors... they are not the ones that strike you as the aggressive types that want to roll the dice every morning, so why are they doing that now?," said Ludovic Colin, a senior portfolio manager at Swiss asset manager Vontobel.

Investors, including Colin, have these explanations.

First, while COVID-linked uncertainty was a 2020 story, virus mutations this year have made it harder to predict the economic outlook and implications for central banks.

Economists polled by Reuters offered a median 2021 forecast for U.S. GDP growth of around 2% in early-2020, which rose to 4% last May, then dropped a little before standing at almost 5% in February and at 6%-plus in May.

Second, major economies are debating, for the first time in years, whether long-dormant inflation is back.

"This can lead yields to fluctuate from one end as we saw in Q1, when everyone was very optimistic, to another as pessimism returned. This will likely persist until we get clarity."

Even in Germany, where the European Central Bank holds roughly a third of the bond market, it's no longer straightforward to bet yields will fall.

Yields on ten-year debt, known as Bunds, rose to -0.07% in May, within striking distance of turning positive, before dropping to a six-month low of -0.52% last month.

And September is shaping up to be the most volatile month since April 2020, according to one gauge measuring the average daily move between the highest and lowest Bund futures price.

Yields were driven up by a hawkish ECB chorus calling for stimulus cuts, before the bank itself struck a dovish note at its last meeting.

Mike Riddell, head of macro unconstrained at Allianz Global Investors, expects recent swings to be followed at some point by bigger volatility shocks.

"I don't believe central banks have killed volatility," he said.

For a graphic on Volatility in German Bund futures rises: With central bank activity still dominating bond markets, volatility is unlikely to spiral too much. Nor is it manifesting yet in market-based gauges such as the MOVE index which has ticked only modestly higher this year.

Vontobel's Colin said the early-2021 bond selloff was likely triggered by an inflation rethink, with the likes of hedge funds quick to seize upon signs of faster price growth.

"The quick-buck guys jumped on this argument, they forced the long-term guys to listen, which is why you got this extreme positioning on bonds and yields going higher, earlier this year," Colin added.

But being first did not mean top returns; macro and fixed income strategies gained 4.6% and 3.8% respectively between January and July 2021, Eurekahedge data shows.

Investors have to move quickly, she said, "...or you're out of it because it's happened within a couple of days."

For a graphic on Government bond trading volumes rising: