Gold price is in 'no man's land' after $40 drop as outlook on U.S. economy shifts 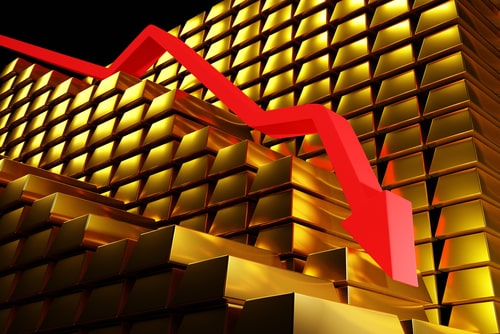 (Kitco News) Gold dropped more than $40 in the aftermath of better-than-expected U.S. retail sales on Thursday. And analysts are now saying that prices are in "no man's land" as U.S. economic outlook shifts ahead of the Federal Reserve interest rate announcement.

The U.S. retail sales numbers beat expectations in August, rising 0.7% following a drop of 1.8% in July. Market consensus calls were projecting to see a drop of 0.8%.

"The big catalyst on gold selling off was the retail sales number. When you take the economy, and you slice it up into a pie, one part of measuring U.S. economic strength is the retail sector, which has been fairly non-existent for quite a while," Blue Line Futures chief market strategist Phil Streible told Kitco News.

A stronger retail sector could mean a more hawkish Federal Reserve down the road, Streible pointed out.

"August's surprise recovery in retail could trigger more hawkish commentary from the Fed. Tapering and higher rates just got a little closer. The retail figure is not likely to impact Fed's interest rate announcement next week. But the central bank will acknowledge they are monitoring the progress," he said.

"If you were to track the number of news stories with the theme of stagflation, you realize, it is part of the market's narrative, and you could expect that to translate into capital inflows into gold. But, instead, interest remains stagnant, and gold is struggling to find interest," Ghali told Kitco News.

Money managers are finding better opportunities out there, he added. "Gold prices found support at $1,750 level, which is a technical support range. Gold will remain anchored near the $1,800 range for some time," Ghali noted. "We are seeing very little speculative interest in gold, with ETF holdings remaining largely unchanged."

What the precious metal does at the $1,750 level will determine whether prices will recover or see another selloff, said OANDA senior market analyst Edward Moya, adding that gold bulls could be in for some major disappointment.

"Over the past two weeks, gold was unable to muster up much of a rally despite growing calls for caution with U.S. equities. Gold has fallen to the danger zone and could easily plunge towards the $1,700 level. Gold is going to trade technically for a while, and if prices close below the downward sloping trend line (approximately $1,750) from last summer's record high, it might get very ugly for bullion holders," he said Thursday. "Gold will remain volatile now that it has clearly broken down from its consolidation pattern."

As this trading week nears the end, all eyes are on Wednesday's Federal Reserve interest rate meeting.

"The U.S. economy is still headed in the right direction, and this will allow the Fed to remain on cruise control for a couple more months. Next week's FOMC meeting will likely see Fed Chair Powell reiterate they will taper before the end of the year," said Moya. "If the data continues to show the economy is quickly moving beyond the delta variant impact, a November taper will become widely priced in."