(Kitco News) - Permanent closures and temporary suspensions of mines due to the COVID-19 crisis hit global uranium production in 2020. Kazakhstan was the largest uranium producing country in 2020, followed by Australia and Namibia.

Amid an emerging uranium market boom, which was recently spurred by relentless spot uranium purchases primarily by the Sprott Physical Uranium Trust, the World Nuclear Association (WNA) released data on the global uranium production in 2020.

According to WNA, in 2020, the world’s total uranium production amounted to 47,731 tonnes, a significant 13% decline over 2019 (54,742 tonnes), and the lowest level of uranium output in more than a decade. WNA said that last year, mined uranium covered only 74% of its global demand, which is also the lowest level in over a decade.

Kazakhstan was the largest uranium producing country with 19,477 tU mined in 2020, which is 15% less compared to the country’s output of 22,808 tU in 2019 due to the expected impact of the pandemic and decreased wellfield development activity, as well as lower staff levels at the local uranium mines in April-July 2020.

Australia was the second largest uranium producer with 6,203 tonnes of uranium produced in 2020, which is 6% less than in 2019 (6,613 tonnes). Uranium production ceased at Rio Tinto’s Ranger mine in January 2021. Australia's known uranium resources are the world's largest – almost one-third of the world total.

Namibia jumped one position up and landed third in 2020. The country produced 5,413 tonnes of uranium in 2020, a 1% decline over 2019 (5,476 tonnes). Chinese companies have taken control over two uranium producing mines in Namibia, Husab and Rössing.

Canada was the world's largest uranium producer for many years, accounting for about 22% of world output, but in 2009 was overtaken by Kazakhstan. In 2020, Canada was fourth and produced 3,885 tonnes of uranium, which is 44% less than in 2019 (6,938 tonnes). The uranium production decline in Canada was due to the COVID-19 related suspensions at the Cigar Lake mine in Saskatchewan.

Uzbekistan sits fifth. This resource-rich Central Asian nation produced 3,500 tonnes of uranium in 2020, unchanged from 2019. Uzbekistan does not process uranium locally and exports its entire produced stock to other countries. 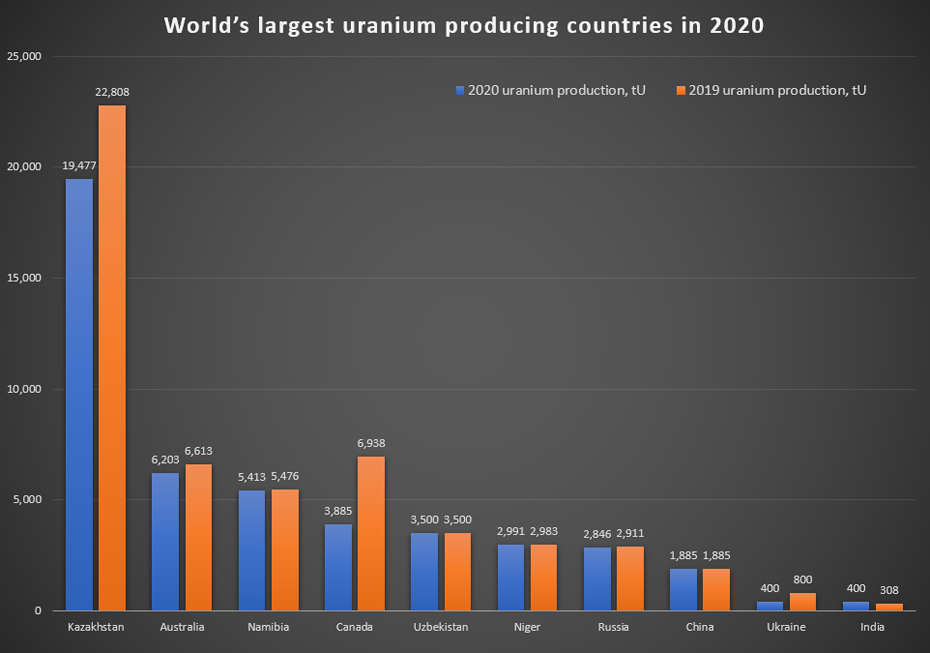