Sept 20 (Reuters) - U.S. Federal Reserve officials will lay bare how soon and how often they think the economy will need interest rates rises over the next three years when they release new forecasts at their policy meeting on Wednesday, with investors on alert for a faster pace of tightening.

The so-called "dot plot," released quarterly, charts policymakers projections, on an anonymous basis, for economic growth, employment and inflation, as well as the timing of interest rate rises.

It will show whether most are sticking to recently expressed views that the Delta variant of the coronavirus, which has dented economic activity, will have a short-lived effect on the recovery despite the current turbulence and uncertainty it is causing. This week's set of dots also will include policymakers' forecasts for 2024 for the first time.

Interest rates have been near zero since the beginning of the COVID-19 pandemic with the Fed vowing not to raise borrowing costs until the economy has fully healed. According to the Fed's new framework, that means a greater emphasis on achieving maximum employment along with its 2% average inflation goal.

Hotter-than expected inflation despite some recent moderation is testing policymakers' commitment to that new framework and could cause the median of the Fed's forecasts for a liftoff in interest rates to switch to 2022 from 2023 at the June meeting.

For that to happen, only three policymakers would need to bring forward their projections, and a shift of just two would result in a dead-heat split inside the Fed over whether liftoff is in the cards for next year or later.

"We all know the dots are not promises or commitments, but it's still the best that the market has to go by to what policy will be in the future," said Roberto Perli, an economist at Cornerstone Macro and former Fed staffer. "The risks are skewed to the upside." 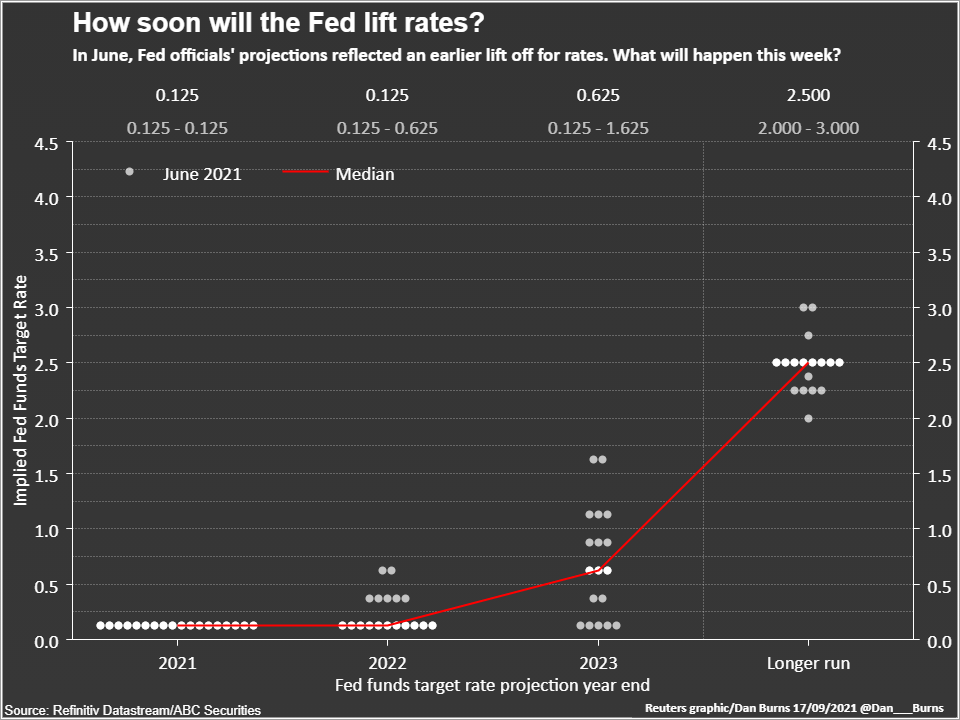 In June, Fed officials' projections reflected an earlier lift off for rates. What will happen this week?

There are rising expectations the central bank will at least use its upcoming meeting on Sept. 21-22 to signal it plans to start reducing its massive bond purchases, also put in place in early 2020 to support the economy's recovery, in November if incoming data holds up, amid the fastest economic recovery in history from a brief recession last year. read more

Fed officials argue the asset purchase program has run its usefulness given that demand, which it most directly affects, has rebounded even if the supply of both labor and goods has been constrained.

The scaling back could be completed as early as mid-2022, clearing the way for the Fed to lift interest rates from near zero any time after that.

The consensus among economists polled by Reuters is for rates to remain near zero until 2023 but more than one-quarter of respondents in the September survey forecast the Fed raising rates next year. read more

If the Fed's 2022 and 2023 median interest rate projections stay the same, attention will focus on 2024 as investors parse the pace of rate rises once liftoff begins. It will also show how many policymakers, if any, still see interest rates on hold until at least 2024. In June, five out of the 18 policymakers saw rates staying pat until the end of 2023.

Currently, futures on the federal funds rate, which track short-term interest rate expectations, are pricing in one rate hike in 2023 and one or two additional increases in 2024, but the latest Primary Dealer survey, which the Fed consults to get a read on market expectations before each meeting, shows three additional rate hikes.

If the Fed pencils in three or more hikes at this week's meeting for 2024, "that would deliver a hawkish sign that could more than offset any dovish messaging on tapering," said Michael Pierce, an economist at Capital Economics.

The extent to which policymakers alter their other economic forecasts could also provide valuable insight. Few expect the Fed to change its expectation of the level to which interest rates could rise, currently seen as 2.5%, but their forecasts on U.S. economic growth this year and inflation projections this year and next could see revisions.

Inflation estimates could prove more thorny. Fed Chair Jerome Powell, still awaiting word on whether he will be renominated to his post for a second term by U.S. President Joe Biden, has steadfastly kept to the view higher-than-expected inflation is transitory, although he and others have admitted it may linger longer than this year amid persistent supply constraints.

Some other Fed officials are more alarmed and several have cited the possibility that higher inflation persists and causes a rise in inflation expectations as reason to taper asset purchases quickly to allow time for faster rate rises if required.

If the median projections show, for example, an additional rate hike in 2023 than currently forecast and indicate an earlier date for liftoff, Powell's likely reiteration at his press conference following the meeting that tapering is not connected to rate hike decisions, could fall flat.

"The Board has drifted in the hawkish direction," said Tim Duy, an economist at SGH Macro Advisors and an economics professor at University of Oregon, who expects the dots will show most policymakers now believe raising rates in 2022 will be appropriate, given rising concern about inflationary pressures. "The doves are now limited."

Reporting by Lindsay Dunsmuir; Additional reporting by Ann Saphir; Editing by Andrea Ricci
Disclaimer: The views expressed in this article are those of the author and may not reflect those of Kitco Metals Inc. The author has made every effort to ensure accuracy of information provided; however, neither Kitco Metals Inc. nor the author can guarantee such accuracy. This article is strictly for informational purposes only. It is not a solicitation to make any exchange in commodities, securities or other financial instruments. Kitco Metals Inc. and the author of this article do not accept culpability for losses and/ or damages arising from the use of this publication.