Is gold price ready to hear what Fed's Powell has to say? 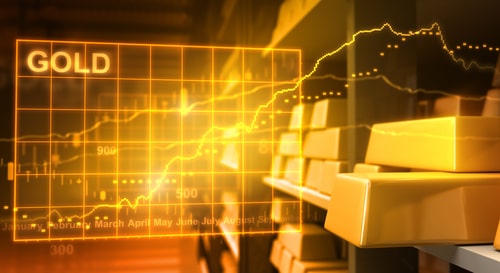 (Kitco News) Gold is now in a much better position to receive Federal Reserve Chair Jerome Powell's announcement on Wednesday. But can it handle a more hawkish message from the central bank?

Aside from increased volatility in the global equity markets, the OECD raised its inflation outlook for almost all Group of Seven (G7) countries for the rest of this and next year.

"Near-term inflation risks are on the upside, particularly if pent-up demand by consumers is stronger than anticipated, or if supply shortages take a long time to overcome," the OECD said in a report. "Accommodative monetary policy should be maintained, but clear guidance is needed about the horizon and extent to which any inflation overshooting will be tolerated."

The OECD said that it projects for the U.S. inflation to remain above 3% throughout next year. "Inflation is expected to settle at a level above the average rates seen prior to the pandemic," the OECD said. "This is welcome after many years of below-target inflation outcomes, but it also points to potential risks."

For the Fed, this means that it has to be extra cautious when it comes to when and how much it is best to taper its $120 billion-a-month of asset purchases.

The precious metal is still facing a significant headwind with the Fed's announcement on Wednesday as any hint of a hawkish tapering timeline would send prices lower once again.

"The firm U.S. dollar, coupled with expectations of the U.S. Fed, whose two-day meeting begins today, appears to have been keeping the gold price in check," said Commerzbank analyst Daniel Briesemann.

BBH Global Currency Strategy does not see China's Evergrande situation as having any impact on Fed's deliberations or decisions. "No change in policy is expected, but we expect a hawkish hold as the official statement and the minutes should continue to lay the groundwork for tapering this year," BBH currency strategy head Win Thin said.

The Fed is expected to officially announce tapering at its November meeting, with the estimated start in December, Thin added.

The U.S. central bank will also be releasing its upgraded set of economic projections, including the dot plot.

Most of the analysts are looking to get some mention of tapering, but for the statement to fall just short of an official announcement.

"We and consensus expect no formal changes to be announced at this meeting, although we are likely to get some changes to the policy statement suggesting an announcement on tapering is imminent," said ABN AMRO senior U.S. economist Bill Diviney. "Specifically, the Fed could tweak the part of the July policy statement linking the pace of asset purchases to progress toward its goals to something along the lines of: 'the economy has made further progress toward these goals, and this is likely to warrant a reduction in the pace of asset purchases in coming meetings."

The Fed's announcement could be disruptive for the precious metal, especially if the updated dot plot has a hawkish tilt to it, said commodity strategists at TD Securities.

"Recall that only two officials need to mark-up their 2022 dots for the median to move higher … In this context, the 'stagflation' narrative is capturing the market's share of mind, as participants look to a period of high inflation and slowing growth, but this has yet to translate into additional interest for gold," the strategists said.