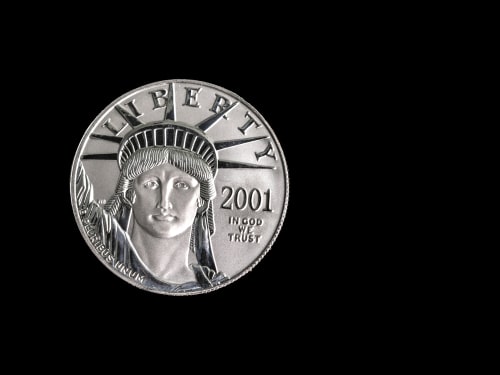 (Kitco News) The U.S. will run out of money in October if the debt ceiling is not raised. But instead of relying on politicians to solve the problem, the Treasury Department has another surprising option – minting a $1 trillion platinum coin.

This idea gained popularity during the previous great debt ceiling debate a decade ago but was eventually rejected by the Obama administration.

There is a loophole in the law that dictates the mintage of coins, potentially allowing the Treasury Department to mint platinum coins of any denomination and deposit them at the Federal Reserve in exchange for the U.S. federal debt.

You can find the wording of this in the subsection (k) of 31 USC 5112, which governs "Denominations, specifications, and design of coins."

The clause states: "The Secretary may mint and issue platinum bullion coins and proof platinum coins in accordance with such specifications, designs, varieties, quantities, denominations, and inscriptions as the Secretary, in the Secretary's discretion, may prescribe from time to time."

Theoretically, U.S. Treasury Secretary Janet Yellen can order the platinum coin to be minted and avoid a government shutdown if the debt ceiling is not raised in time.

In the past, this option has always been ruled out. Here's what former President Barack Obama told Crooked Media back in 2017:

"We were having these conversations with Jack Lew [the treasury secretary at the time] and others about what options in fact were available, because it had never happened before," Obama said. "There were all kinds of wacky ideas about how potentially you could have this massive coin."

Obama described imagining a very large coin. "It was some primitive ... it was out of the Stone Age," Obama said. "I pictured rolling in some coin."

The U.S. is not on a gold or platinum standard. And even though the coin will require some platinum to be used, it can be as small as a dime, with the U.S. Treasury assigning any value to it, including $1 trillion.

"Like this is the parody version of #MTFC. Coin doesn't have to be massive. Just needs to platinum and have $1 trillion printed on it," co-host of the Odd Lots podcast Joe Weisenthal tweeted back in 2017.

Like this is the parody version of #MTFC. Coin doesn't have to be massive. Just needs to platinum and have $1 trillion printed on it. pic.twitter.com/J3EamIeu4r

In terms of the inflationary impact, the $1 trillion platinum coin might have, Weisenthal assured his readers that this type of Treasury QE would not be the same as the massive fiscal stimulus spending the U.S. economy has seen during the COVID-19 pandemic.

"Making money through the minting of high-denomination coins sounds weird and inflationary. But it only sounds inflationary for the same reason that people thought QE would be inflationary in 2009. As my colleague Ed Harrison puts it, you can think of the coin as a kind of Treasury QE. It would simply be an asset swap. The Fed is given a coin to hold on its balance sheet. The Treasury gets retired debt back. The effect on the real economy is marginal at best," he wrote in a post on Wednesday. "There's no new spending. No new money chasing goods. Just different arms of the government making accounting changes."

The treasury officials have stated in the past that minting platinum coins is not the solution for the debt ceiling problem and instead urged Congress to do its job.

This time around, the official thinking has not changed.

"There is only one viable option to deal with the debt limit: Congress needs to increase or suspend it, as it has done approximately 80 times, including three times during the last Administration," White House spokesperson Mike Gwin said in a statement to Insider.

On Wednesday, former Secretaries of the Treasury sent a letter to Congress on the debt limit, highlighting the urgency of the situation.

"As former Treasury secretaries, we write to express our deep sense of urgency that Congressional leadership, working with the Administration and the President, move swiftly to initiate and complete a viable legislative process necessary to raise the debt limit," the letter said. "Failing to address the debt limit, and allowing an unprecedented default, could cause serious economic and national security harm."

The warning comes after several urgent statements made by Yellen in August and September.

In a recent Wall Street Journal op-ed, Yellen noted that the U.S. will run out of money and won't be able to pay for its bills as soon as October.

"We are finally emerging from the pandemic crisis. Let's not plunge ourselves into a financial one," she wrote.

The $1 trillion platinum coin idea has been heavily debated on social media this week under the hashtag #mintthecoin, with personalities like Weisenthal supporting the idea.