LONDON, Sept 24 (Reuters) - Stocks fell on Friday as uncertainty about Chinese developer Evergrande sapped confidence but the major markets remained on course for a weekly gain, while European and U.S. bond yields extended their rise after talk of central bank tapering.

That European and United States indexes look set to end the week higher had seemed unlikely on Monday when fears about an Evergrande debt default sparked widespread selling of risky assets.

Investors even shrugged off the more hawkish tone at Federal Reserve and Bank of England policy meetings and the first interest rate rise -- in Norway -- from a major central bank since the pandemic.

Analysts say investors remain bullish on the outlook for global growth and are confident that central banks' withdrawal of their stimulus schemes won't derail the rebound and that the Evergrande crisis can be contained.

On Friday, however, there was some nervousness after solid gains the previous session.

In Asia MSCI's broadest index of Asia-Pacific shares outside Japan (.MIAPJ0000PUS) eased 0.5% to take its weekly losses to 1.2%, its third drop in a row.

The MSCI World equity index dropped 0.17% (.MIWD00000PUS) but was just into positive territory for the week, leaving it 2.7% off record highs.

Evergrande's debt crisis continued to rattle confidence, with Hong Kong (.HSI) and Shanghai (.SSEC) stocks closing lower after Reuters reported that some offshore bondholders of the company had not received interest payments by the Thursday deadline. read more

The property developer's shares (3333.HK) also fell 11% on Friday. They had rallied 17.6% the previous day after the company said it had agreed to settle coupon payments on a domestic bond.

"For the long-term investor, we would treat any meaningful rebound (in Chinese property stocks) as a chance to trim positions, as structurally we do not see any re-rating story for the developers," Karl Chan, vice president on JPMorgan's China property team said on a conference call on the Evergrande situation.

Bond yields in U.S. and the euro zone extended their rise after Thursday's jump as expectations grow that the Fed will begin tapering its asset purchases by year end and other countries are not far behind.

The yield on benchmark 10-year Treasury bonds was last at 1.425%, near a three-month high after gaining 13 basis points overnight. 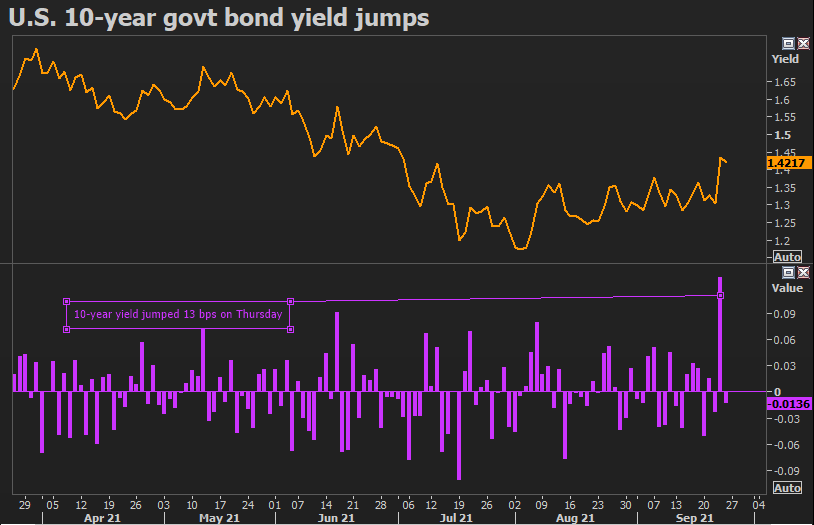 UK gilt yields extended their surge as investors brought forward their expectations for a BoE rate hike to March.

A sense that an inflation surge across many countries may not be as temporary as central bankers believed a few months ago is also fuelling the rise in yields.

"Central bankers have been talking in unison about inflation being transitory but if even the Fed is softening its stance on this, then that could also be the case elsewhere," said Jan von Gerich, chief analyst, Nordea.

"There is a difference though between the U.S. and euro area, where it's easier to buy into the story that price pressures are transitory."

The Fed said on Wednesday it could begin reducing its monthly bond purchases by as soon as November, and that interest rates could rise quicker than expected by next year. The November deadline was largely priced in by markets.

The dollar index on Friday rose 0.1% after dropping sharply overnight against a basket of its peers .

Oil prices rose for a fourth straight day due to global supply concerns following powerful storms in the United States.

Gold rose 0.5% to $1,751 per ounce. It fell over 1% the day before as higher yields hurt the non-interest bearing asset.

Additional reporting by Alun John in Hong Kong, Dhara Ranasinghe and Marc Jones in London Editing by Ana Nicolaci da Costa, Robert Birsel and Chizu Nomiyama
Disclaimer: The views expressed in this article are those of the author and may not reflect those of Kitco Metals Inc. The author has made every effort to ensure accuracy of information provided; however, neither Kitco Metals Inc. nor the author can guarantee such accuracy. This article is strictly for informational purposes only. It is not a solicitation to make any exchange in commodities, securities or other financial instruments. Kitco Metals Inc. and the author of this article do not accept culpability for losses and/ or damages arising from the use of this publication.