Kazakhstan’s Kazatomprom is the world’s largest uranium producer. Kazatomprom uses highly efficient and low-cost in-situ recovery mining method. In 2020, the company’s attributable uranium production of 10,736 tU dropped by 19.2% compared to 2019 because of the impact of the COVID-19 pandemic, as mine preparation, repair and renewal operations were suspended for four months in 2020.

French nuclear giant Orano sits second with 4,453 tU produced in 2020, a 23% decline compared to 2019. Orano’s decline in production was due to the COVID-19 related suspensions of mining operations in Kazakhstan and Canada. In addition, in March 2021, the company ceased uranium mining activities at the Akouta (Cominak) mine in Niger as its reserves and resources have been depleted.

Uranium One is third with 4,276 tU produced in 2020. This British Columbia-incorporated, Canadian-resident corporation is controlled by the Russian state nuclear giant Rosatom and owns stakes in a diverse portfolio of assets worldwide, including Kazakhstan, the United States, Tanzania and Namibia. The company’s attributable uranium output decreased by 8% over 2019 primarily due to lower production in Kazakhstan.

Uzbekistan’s state-controlled mining company Navoi, one of the world’s largest producers of gold and uranium, produced 3,500 tU in 2020, unchanged from 2019. Navoi uses in-situ recovery mining method to produce uranium at its mines. 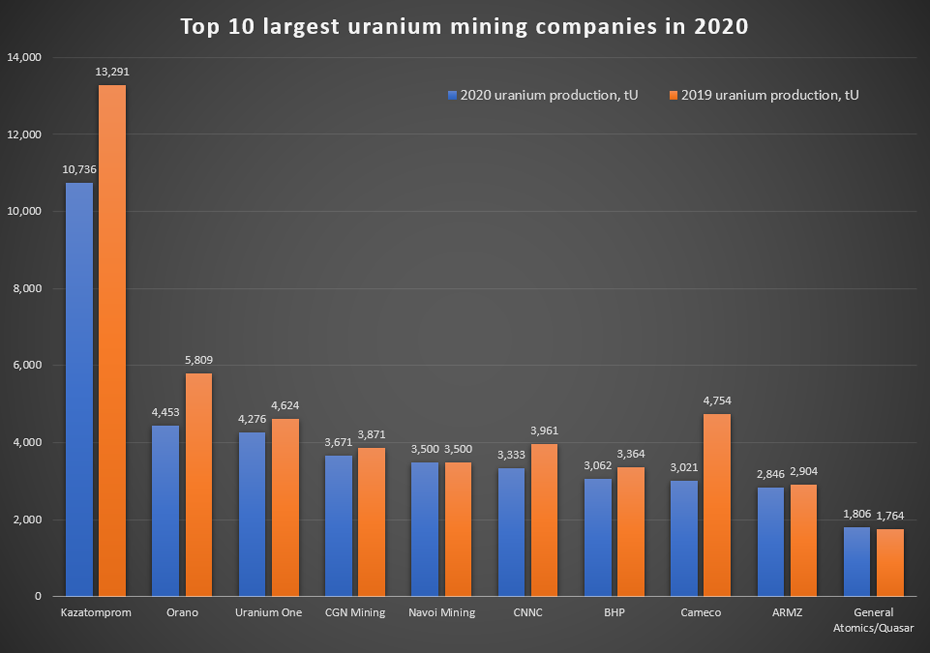