Stocks also benefited from an easing in Sino-U.S. tensions and Chinese authorities' decision to pump in more cash to offset the fallout from real estate firm Evergrande's woes (3333.HK), while there was some relief Germany's election outcome had ruled out a pure left-wing coalition government.

Instead, a coalition of the centre-left Social Democrats with the Greens and the liberal FDP looks likely read more

While early German equity gains fizzled (.GDAXI), (.STOXX), European energy and banking shares surged around 2.5% (.SXEP), (.SX7E) benefiting from the jump in crude prices and bond yields respectively, with the former at the highest since February 2020.

The oil price surge is stoking speculation that global inflation will prove longer-lasting than anticipated, forcing central banks to act and benefiting so-called reflation investments which benefit as rates rise.

On Wall Street, the industrials-heavy Dow Jones appeared set for a firm session, while futures for the tech-dominated Nasdaq , which do less well when rates rise, were down 0.3%.

"All in all, it's a positive story as we have a strong economic macro story underpinning everything," said Fahad Kamal, CIO at Kleinwort Hambros in London.

Kamal noted that optimism was reflected in central banks signalling their intent to gradually remove pandemic-era stimulus, which in turn was lifting bond yields.

"There is still a huge factor of TINA and it's even stronger when rates are rising...It's not just energy but also bank shares doing really well given the rising rate expectations," he said, using the 'there is no alternative' (TINA) acronym often employed by equity bulls.

Coming on top of this year's 300% surge in European gas prices, the price rises risk further inflaming inflation expectations and hastening the end of super-cheap money, 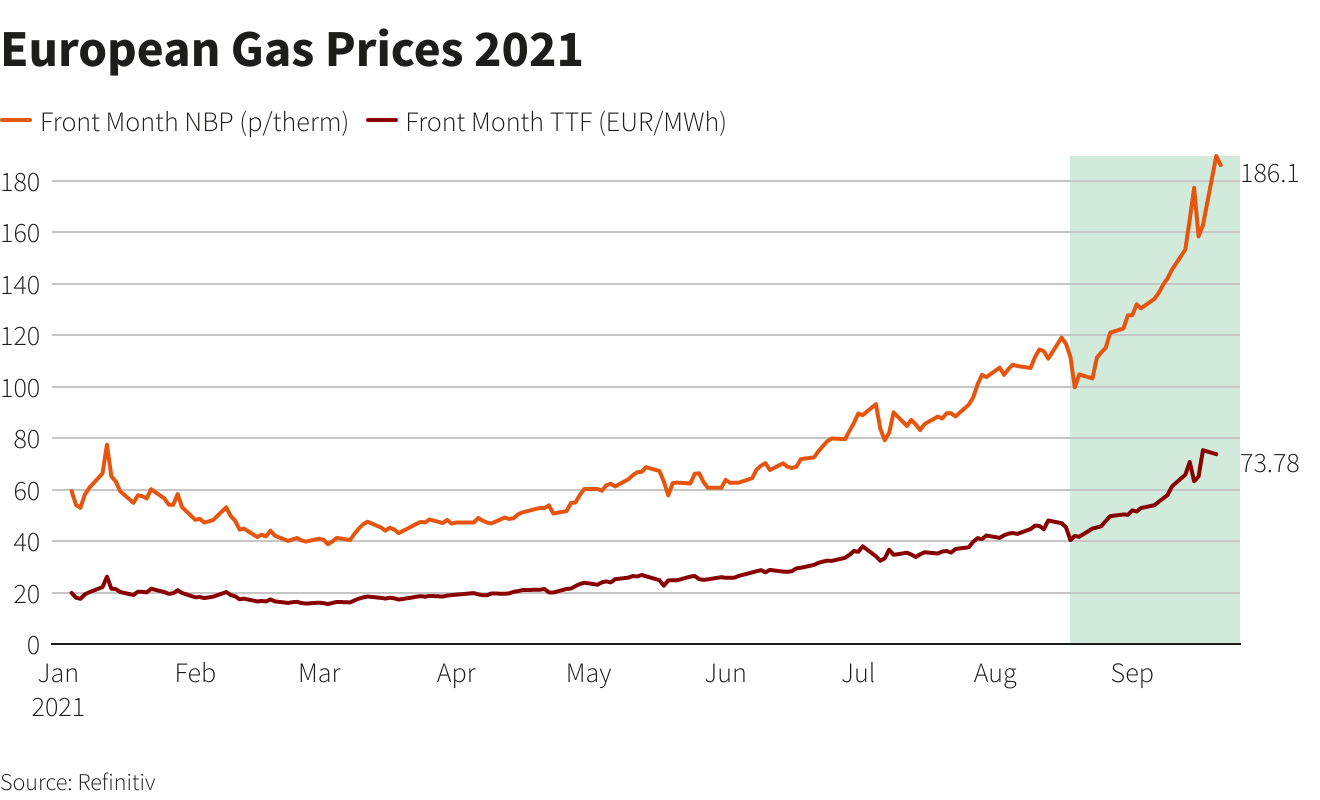 Goldman Sachs forecast Brent to hit $90 per barrel by year-end, adding "the current global oil supply-demand deficit is larger than we expected, with the recovery in global demand from the Delta impact even faster than our above-consensus forecast".

On Monday, U.S 10-year Treasury yields rose to 1.49% , their highest since end-June, while German 10-year government borrowing costs overcame an early dip to hit a three-month high of -0.210 ,

The stronger rise in U.S. yields, especially on an inflation-adjusted basis, is also lifting the dollar which rose 0.15% against a basket of major currencies, inching towards the one-month high hit last week .

Worries persist about China, however.

A power supply crunch that is triggering an industrial contraction and pressuring the economic outlook is adding to concerns stemming from property firm Evergrande which missed a bond coupon payment last week and faces another in coming days. read more

Hong Kong-listed shares in Evergrande's electric car unit (0708.HK) plunged as much as 26% after it warned it urgently needed a swift injection of cash.

Still, Chinese blue chip shares (.CSI300) gained 0.5%, thanks to another cash injection from the central bank and hopes the release of Huawei executive Meng Wanzhou would reset ties with the West. read more

"The energy shortages are coming on top of Evergrande and the regulatory crackdown. These things are unrelated but happening in quick succession could lead to something more serious," Kamal said.

Focus shifts now to U.S. fiscal policy -- the House of Representatives is due to vote on a $1 trillion infrastructure bill, while a Sept. 30 deadline on funding federal agencies could force the second partial government shutdown in three years. read more