Is gold at a turning point? Bullish sentiment drops to March lows 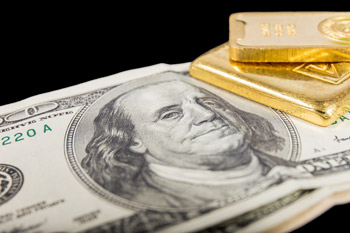 (Kitco News) - Rising bond yields and a stronger U.S. dollar forced more hedge funds to increase their bearish bets in gold as markets prepare for the Federal Reserve to start reducing its bond purchases, according to analysts quoting the latest data from the Commodity Futures Trading Commission.

The latest trade data shows that net bullish positioning has been at its lowest point since early March. However, analysts note that the market could be at an inflection point as inflation continues to rise, adding to concerns that slowing economic growth will lead to stagflation.

"With investment flows already reduced, a cleaner positioning slate suggests the weak price action will not turn into a rout. Meanwhile, fears of stagflation are growing ever stronger, which could once again spur interest in precious metals down the road," said commodity analysts at TD Securities.

The CFTC disaggregated Commitments of Traders report for the week ending Sept. 28 showed money managers lowered their speculative gross long positions in Comex gold futures by 854 contracts to 118,923. At the same time, short positions rose by 15,651 contracts to 88,062.

Gold's net length now stands at 30.861 contracts, down 34%% from the previous week. Carsten Fritsch, precious metals analyst at Commerzbank, noted that gold's bullish speculative position has dropped by more than 50% in the last two weeks.

Investors and hedge funds have been increasingly bearish on gold as the Federal Reserve looks to tighten interest rates at a faster pace than expected. Last week Federal Reserve Chair Jerome Powell reiterated in testimony before Congress that the U.S. central bank could release its plans to reduce its monthly bond purchases in November and start the tapering process in December.

The tapper plan also comes after the Federal Reserve said it sees a rate hike in December of 2022. The hawkish sentiment from the Federal Reserve has created some selling pressure in gold, which briefly fell below critical support at $1,750 an ounce during the survey period.

Although bullish interest in gold is at its lowest point in more than seven months, Fritsch said gold could be at a turning point.

"Low speculative net long positions often indicate trend reversals in price performance. This was the case in March, for example, when the price hit its 2021 low – which has yet to be broken – shortly afterward," he said.

In a comment on Twitter, Grant Beasley, managing director at Highbury Capital, said that although sentiment in the gold market could continue to fall, the impact on prices could be limited.

Comex Net Managed Money Positions from last week. Now under 200 Tonnes. Getting washed out. It can still go negative if sentiment gets worse, but I'd bet 90% of the move down in gold done. A smash to test $1680 is possible. By Nov/Dec may be a chance. ?
h/t @JReade_WGC pic.twitter.com/Ru6yy4ZgPi

While the sentiment is still negative in gold, it appears to have shifted slightly in silver as the latest data shows hedge funds reduced their bearish bets last week.

The disaggregated report showed that money-managed speculative gross long positions in Comex silver futures fell by 791 contracts to 47,918. At the same time, short positions dropped by 3,005 contracts to 43,918

Silver's net length stands at 3,524 contracts, up from the previous week's two-year low. During the survey period, silver prices managed to hold support above $22 an ounce. Last week silver prices briefly dropped below support; however, some analysts noted that the drop represented a buying opportunity.

Despite the recent volatility in silver prices, many analysts are optimistic that the precious metal's long-term fundamentals remain in place as nations continue to push forward with the global green energy transition.

Copper's net length currently stands at 28,958 contracts. During the survey period, gold prices managed to hold support around $4.20 a pound.

Although the base metal is seeing new bullish interest, analysts noted that a slowing momentum in the global economy could continue to weigh on copper prices in the near term.

"Copper speculators have remained on the sidelines while China's power crunch expands further to downstream sectors. The world's manufacturing engine is increasingly coming under pressure, as the energy crisis intensifies downside risks. Yet, aggregate open interest in copper futures continues to decline as the red metal stubbornly and repeatedly fails to break below technical support, whipsawing both CTA trend followers and traders alike," said analysts at TD Securities.