WASHINGTON, Oct 12 (Reuters) - The number of Americans voluntarily quitting their jobs surged to a record high in August and there were more than 10 million vacancies, pointing to a tightening labor market that could help to keep inflation high as companies raise wages to lure workers.

The Labor Department's monthly Job Openings and Labor Turnover Survey, or JOLTS report, on Tuesday was another reflection of an economy that is battling labor and raw material shortages in nearly every industry, which are crimping growth.

"There are help-wanted posters in every shop window on Main Street, and the lack of workers is exacerbating the supply disruptions throughout the nation that is lighting a match to the fire of inflation," said Christopher Rupkey, chief economist at FWDBONDS in New York. "The labor market has already recovered."

Quits increased by about 242,000 in August, lifting the total to a record 4.3 million. There were 157,000 people who quit in the accommodation and food services industry while 26,000 left in the wholesale trade business. State and local government education saw 25,000 departures. 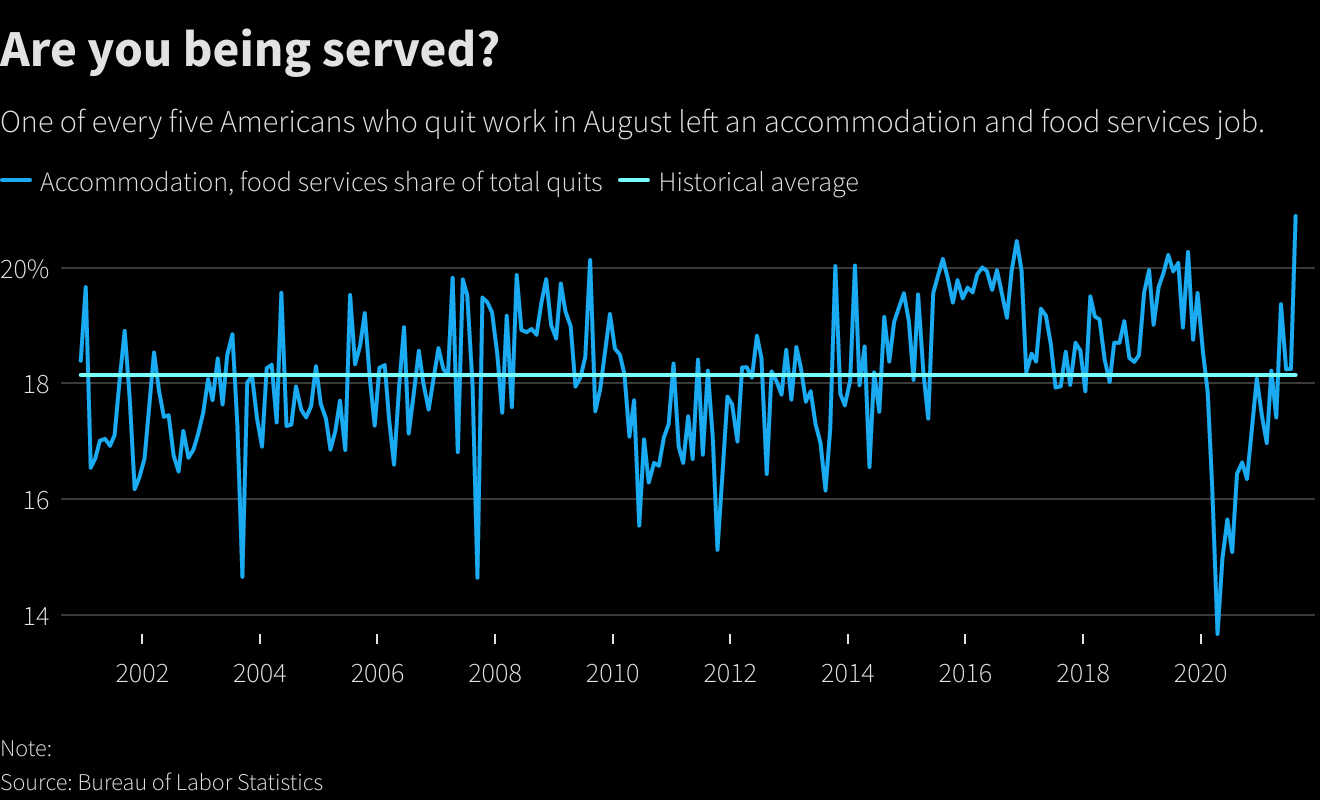 People are most likely leaving their jobs for fear of contracting COVID-19. The number of quits increased in the South and Midwest regions, which have borne the brunt of the summer wave of coronavirus infections driven by the Delta variant.

Vaccinations rates are low in the South and Midwest and some states like Florida and Texas have banned mask mandates.

The quits rate shot up to an all-time high of 2.9% in August from 2.7% in July. The quits rate is normally viewed by policymakers and economists as a measure of job market confidence. The higher quits rate suggests wage inflation will likely continue to build up as companies scramble for workers, who have unlimited choice.

"These readings are also consistent with strong demand for labor, with people feeling confident in their abilities to get new jobs and not many layoffs taking place," said Daniel Silver, an economist at JPMorgan in New York.

Inflation is way above the Federal Reserve's flexible 2% target, while gross domestic product growth estimates for the third quarter are mostly below a 3% annualized rate. The economy grew at a 6.7% pace in the second quarter.

Stocks on Wall Street were weaker on worries over the impact of inflation on upcoming third-quarter earnings. The dollar rose against a basket of currencies. U.S. Treasury prices were mixed.

Though employment remains 5 million jobs below its peak in February 2020, economists believe that number probably is not a true reflection of the labor market's health as the shortfall includes people who have retired.

Job openings, a measure of labor demand, dropped 659,000 to a still-high 10.4 million on the last day of August. Data for July was revised to show 11.1 million unfilled jobs instead of the previously reported 10.9 million.

Despite August's decline, which economists attributed to the coronavirus infections over summer hampering activity in the consumer-facing services industries, vacancies were the second- highest on record and were 49% above their pre-pandemic level. There were 0.8 people per job opening in August.

"The JOLTS report continues to suggest that the labor market isn't as loose as the current 5 million jobs shortfall would indicate," said Lydia Boussour, lead U.S. economist at Oxford Economics in New York. 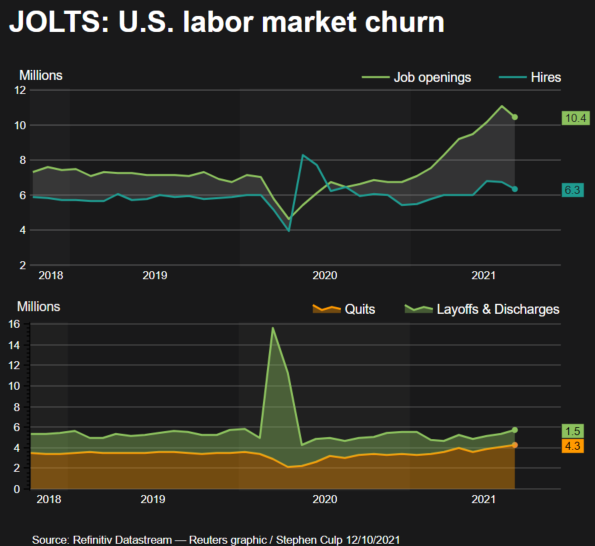 There were 224,000 fewer vacancies in the healthcare and social assistance sector. Job openings in the accommodation and food services industry fell by 178,000. States and local government education vacancies dropped by 124,000 positions.

Regionally, job openings fell in the Northeast and Midwest. The job openings rate dropped to 6.6% from 7% in July.

The government reported last Friday that nonfarm payrolls increased by only 194,000 in September, the smallest gain since December 2020, after increasing 366,000 in August. read more

The scarcity of workers was underscored by a separate survey from the NFIB on Tuesday showing 51% of small business owners reported job openings they could not fill in September, a record high reading for the third straight month.

Hiring decreased by 439,000 jobs to 6.3 million in August. The largest decline since December 2020 was led by the accommodation and food services industry, where payrolls dropped by 240,000 jobs. Hiring at state and local government education declined by 160,000 jobs.

The decrease in hiring was more pronounced in the Midwest region. The hiring rate fell to 4.3% from 4.6% in July.

With COVID-19 infections declining and schools fully reopened for in-person learning, there is hope that more people will rejoin the labor force. The labor squeeze could also ease in the months ahead following the expiration of federal government-funded benefits in early September.

Businesses and Republicans blamed these expanded benefits for the record job openings. But amid increased self employment and all-time high savings as well as early retirements, thanks to a strong stock market and record house price gains, the labor pool could remain shallow for a while.

"Longer-term issues remain as many people who worked in low- paying jobs with variable hours, particularly in leisure/hospitality, may be unwilling to go back to these types of positions," said Sophia Koropeckyj, a senior economist at Moody's Analytics in West Chester, Pennsylvania.

Reporting By Lucia Mutikani; Editing by Andrea Ricci
Disclaimer: The views expressed in this article are those of the author and may not reflect those of Kitco Metals Inc. The author has made every effort to ensure accuracy of information provided; however, neither Kitco Metals Inc. nor the author can guarantee such accuracy. This article is strictly for informational purposes only. It is not a solicitation to make any exchange in commodities, securities or other financial instruments. Kitco Metals Inc. and the author of this article do not accept culpability for losses and/ or damages arising from the use of this publication.