Flooding in a key coal producing province has worsened the supply outlook, with analysts expecting electricity shortages and rationing to continue into early next year.

China, the world’s largest coal consumer, has been grappling with a growing energy crisis brought on by shortages and record high prices for the fuel. The government has taken a range of steps to boost coal production and manage electricity demand at industrial plants, while power producers and other coal users have been ramping up imports.

On Tuesday, the government took its boldest step in a decades-long power sector reform by allowing coal-fired power plants to pass on the high costs of generation to some end-users via market-driven electricity prices, adding to worries about building global inflationary pressures.

China’s state planner said at a news briefing on Wednesday that it will secure domestic coal and energy supplies for this winter while ensuring the country’s climate change targets are met. [B9N2QE019]

Daily coal output has reached the highest since February at more than 11.2 million tonnes, while average coal stocks at its power plants can support about 15 days of use, according to an official from the National Energy Administration at the same news briefing. [L1N2R90M0]

Imports totalled 32.88 million tonnes in September, up 76% from a year earlier. The monthly tally was the fifth highest on record, according to Reuters calculations.

More than half of the regions in Mainland China managed by State Grid have enforced power consumption cuts since last month. 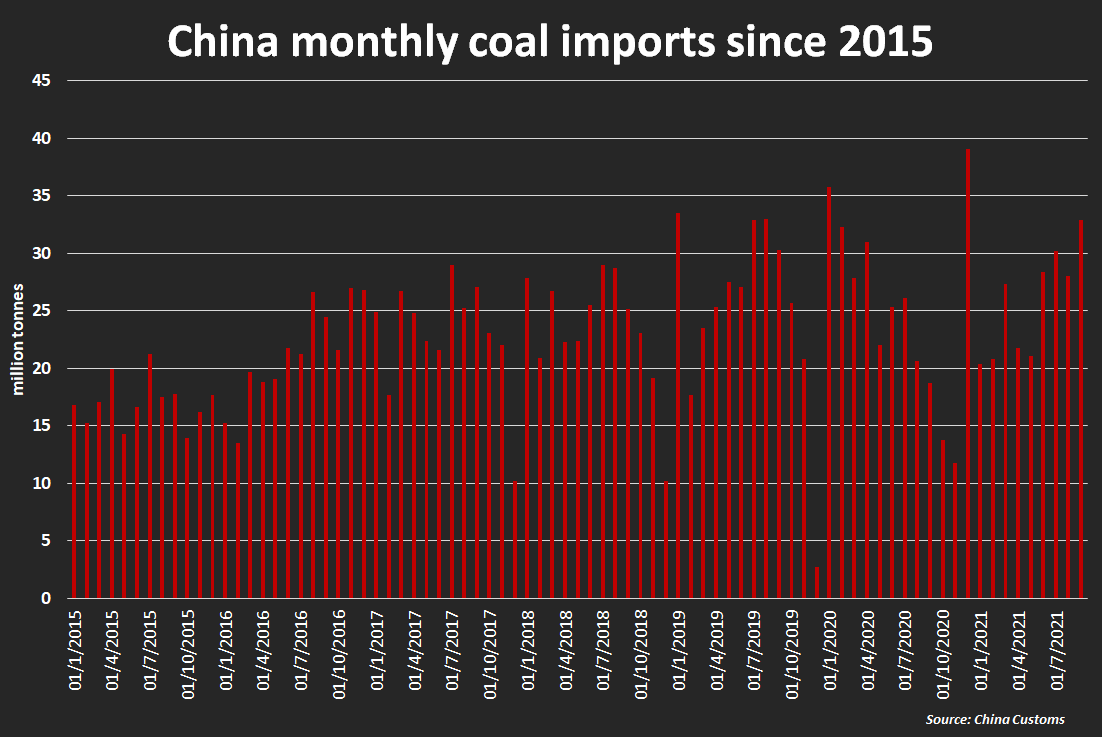 The jump comes a day after Beijing announced it would allow power plants to charge here commercial customers market-based prices for power, a significant break from previous policy that allowed industry to lock in fixed-price deals with suppliers.

Power-hungry industries such as steel, aluminium, cement and chemical producers are expected to face higher and more volatile power costs under the new policy, inflating their costs and pressuring profit margins. [L1N2R904N]

“Although power rationing doesn’t appear to have derailed the export sector so far, there is still a risk that it could do so in the coming weeks,” Julian Evans-Pritchard, Senior China Economist at Capital Economics said in a note.

“And while officials have made clear that the focus of power rationing will be energy-intensive sectors such as metals and chemicals, the hit to output in these industries could filter through supply chains and hurt downstream exporters.”

Factories in eastern provinces of Guangdong and Zhejiang, both major export powerhouses, have been asked to stagger their production throughout the week.

The European Chamber of Commerce said that some European firms in the country are facing delays in orders while some others are unhappy about how Chinese authorities notify them about power cuts sometimes late into the night.

China, the world’s biggest steel producer, on Wednesday told steel mills in 28 cities to cut winter output by at least 30% to achieve output and climate goals.

China is not the only nation struggling with power supplies, which has led to fuel shortages and blackouts in some countries. The crisis has highlighted the difficulty in cutting the global economy’s dependency on fossil fuels as world leaders seek to revive efforts to tackle climate change at talks next month in Glasgow.

Consumption last month rose 6.8% from a year earlier to 694.7 billion kilowatt hours (kwh), bringing total power use over the first nine months up by 12.9% year-on-year.

Reuters reported last week that China has been releasing Australian coal from bonded storage but hasn’t lifted an almost year-long, unofficial import ban on the fuel.

Exports from other key suppliers, such as Russia and Mongolia, have been curtailed by limited rail capacity, while shipments from Indonesia have been hindered by rainy weather.

China’s energy crisis is expected to last into winter, with analysts and traders forecasting a 12% drop in industrial power consumption in the fourth quarter as coal supplies fall short and local governments give priority to residential users.