LONDON, Oct 13 (Reuters) - Britain's economy returned to growth in August after contracting for the first time in six months in July, keeping intact financial market bets that the Bank of England will begin raising interest rates before the end of the year.

Gross domestic product grew by 0.4% in August - a shade under market expectations in a Reuters poll of economists - after it was revised down to show a drop of 0.1% in July when staff absences linked to the Delta variant of COVID-19 peaked.

"The economy picked up in August as bars, restaurants and festivals benefited from the first full month without COVID-19 restrictions in England," Darren Morgan, director of economic statistics at the Office for National Statistics, said.

Financial markets were little changed after the data, which showed a mixed picture on the impact of supply chain difficulties that have pushed up inflation and hurt growth.

The BoE, facing a jump in inflation, looks set to be the first major central bank to raise interest rates since the start of the pandemic. Investors are betting on a rise to 0.25% by the end of December, up from its all-time low of 0.1%.

After the latest official data, Britain's economy is now within 0.8% of its pre-pandemic size - a much smaller gap than when the last monthly figures were released thanks to upward revisions to output growth earlier in the year.

Still, the economy remains around 5% smaller than if growth had continued on its 2010-2019 trajectory uninterrupted by the pandemic - unlike the United States which had almost closed that gap as of the second quarter of 2021. 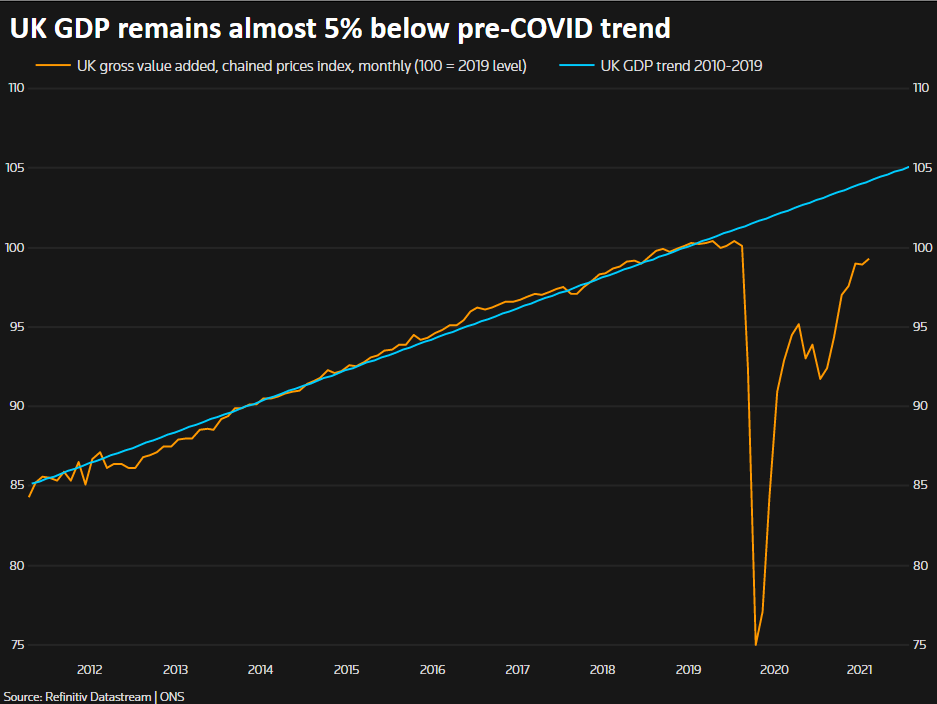 Britain's economy shrank by 9.7% in 2020, its joint-biggest drop in 300 years and matching the annual decline in 1921, when the economy was still reeling from the cost of World War One.

The International Monetary Fund forecast on Tuesday that Britain was on track to have the fastest expansion of any country in the G7 group of rich nations, growing by 6.8% this year, although the outsize scale of last year's slump means it will still take longer to recover than most of its peers.

Britain's economy expanded rapidly in the first half of 2021 helped by the fast initial roll-out of COVID-19 vaccines.

But this has slowed due to a wave of coronavirus cases and global supply chain chaos which in Britain has been exacerbated by new post-Brexit restrictions on trade and immigration.

Growth in the three months to August slowed to its weakest since April at 2.9%.

Chip shortages which had hampered carmakers eased in August, the ONS said, helping manufacturing return to growth, but car output was still more than 14% below a peak in February.

Supply-chain shortages were most visible in construction, where output fell for a second month in a row due to rising costs and shortages of steel, concrete, timber and glass.

The economy is also likely to have taken a further hit in September from temporary shortages of fuel at many petrol stations in England - caused by a lack of tanker drivers - and the impact of a surge in natural gas prices.

"The continuation of modest GDP growth in August should convince the MPC that the economy does not need to be cooled immediately by raising interest rates," he said.

GDP would need to grow by an implausible 2.2% in September for it to match the BoE's forecast in August for growth of 2.1% in the third quarter as a whole, he added.

Separate data from the ONS suggested the impact of Brexit on trade between Britain and the European Union was easing.

Imports of goods from EU countries remained lower than those from non-EU countries for an eighth month in a row but the gap was the narrowest since Britain left the bloc's single market on Jan. 1.

The data showed a similar picture for British goods exports to the EU, the ONS said.

Reporting by David Milliken Editing by William Schomberg and Toby Chopra
Disclaimer: The views expressed in this article are those of the author and may not reflect those of Kitco Metals Inc. The author has made every effort to ensure accuracy of information provided; however, neither Kitco Metals Inc. nor the author can guarantee such accuracy. This article is strictly for informational purposes only. It is not a solicitation to make any exchange in commodities, securities or other financial instruments. Kitco Metals Inc. and the author of this article do not accept culpability for losses and/ or damages arising from the use of this publication.