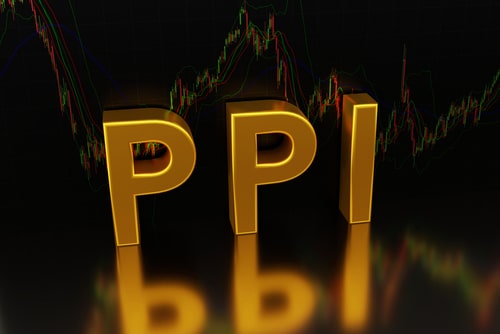 (Kitco News) Gold was largely unchanged and trading near daily highs after the U.S. Producer Price Index (PPI) rose to 8.6% on an annual basis in September versus the expected 8.7%.

This marked the largest year-over-year advance since November 2010.

The PPI slowed to 0.5% on a monthly basis in September from August’s 0.7%. Core PPI, which strips out volatile food and energy prices, came in at 0.2% month-on-month after August’s advance of 0.6%. And the annual core PPI rose 6.8% versus the expected 7.1%.

Market participants pay close attention to the PPI as a gauge for inflation at the wholesale level. It is seen as a leading indicator because, traditionally, producers pass on higher prices to their customers.

The Federal Reserve also keeps a close eye on inflation pressures as they try to gauge whether inflation will be transitory or not.

Gold ticked down but was largely unchanged following the data release, with prices trading near daily highs and just below the $1,800 an ounce level. At the time of writing, December Comex gold futures were trading at $1,799.80, up 0.28% on the day.

With inflation concerns rising again in light of the looming energy crisis, Federal Reserve's September meeting minutes showed that the central bank officials are starting to debate whether or not price pressures are as transitory as previously thought.

"Various participants stressed that economic conditions were likely to justify keeping the rate at or near its lower bound over the next couple of years … In contrast, a number of participants raised the possibility of beginning to increase the target range by the end of next year because they expected that the labor market and inflation outcomes specified in the Committee's guidance on the federal funds rate might be achieved by that time; some of these participants saw inflation as likely to remain elevated in 2022 with risks to the upside," the minutes said.

Trigon restarts production at the Kombat copper mine in Namibia