Oct 15 (Reuters) - Close to half a million low-income homeowners in the United States, many of them minorities, are nearing the end of mortgage forbearance plans that allowed them to halt loan payments during the pandemic, presenting a test for the mortgage service firms tasked with helping struggling borrowers move onto payment plans they can afford.

The number of borrowers exiting the plans is expected to surge over coming weeks as people who signed up early on in the pandemic reach the 18-month limit for forbearance. While close to 80% of homeowners who entered programs at some point inthe pandemic have since exited them, the remaining 20% tend to live in areas with higher shares of minorities, or have lower credit scores and lower incomes, research shows.

Their missed payments could add up to a "forbearance overhang" of more than $15 billion in postponed mortgage payments, or about $14,200 per person, according to Brookings Institution research.

"When coupled with unemployment insurance expiring and other things happening at the same time, it’s not clear that these folks will have an easy time coming out of this," said Amit Seru, a professor at Stanford Graduate School of Business and a senior fellow at the Hoover Institution.

Many borrowers will be able to push missed payments to the end of their loans, and others will be able to capitalize on a hot housing market to refinance or even sell their homes. Homeowners facing hardships who signed up for forbearance in later months may still be eligible for additional extensions. read more

The pandemic worsened racial disparities among homeowners. Black and Hispanic homeowners, disproportionately affected by pandemic-related job losses, were 30% more likely to fall behind on mortgages than the average borrower in the early months of the crisis, between April and November of 2020, according to the Federal Reserve Bank of Philadelphia.

It estimates that about 850,000 homeowners who participated in forbearance were in plans set to expire by the end of this year, including those who already exhausted their options. Roughly half of those homeowners have loans backed by the Federal Housing Administration or the Department of Veterans Affairs.

Those loans, which often require smaller down payments and lower credit scores, are disproportionately used by low-income borrowers, first-time home buyers and minorities. FHA loans, for example, were used by 37% of minority home buyers in 2019, according to the Department of Housing and Urban Development. 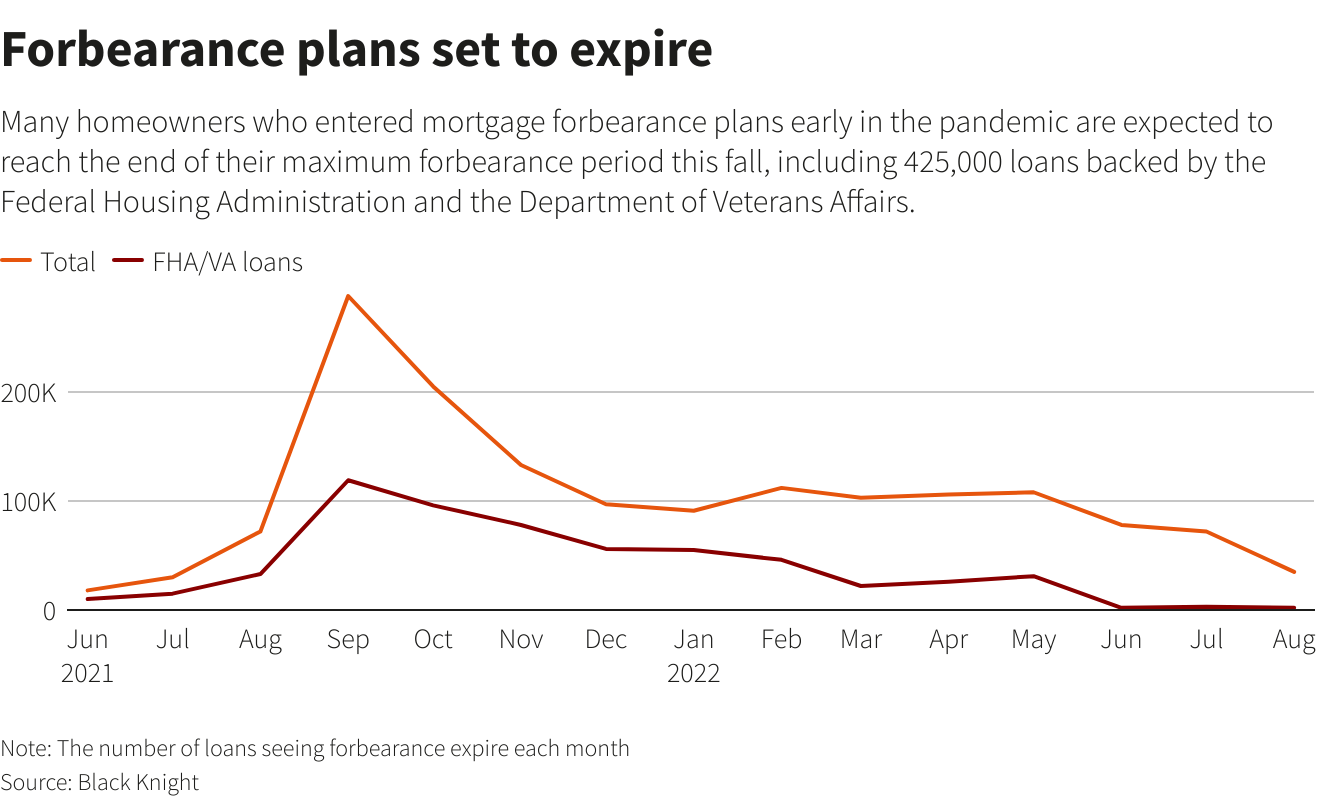 How easily those homeowners are moved into other plans after their forbearance programs end will be monitored by regulators and others in the weeks ahead.

The CFPB ramped up scrutiny of mortgage servicers over the matter this spring and in June finalized new protections for homeowners struggling to make mortgage payments due to the pandemic. Still, foreclosures will be allowed to resume once those extra protections have been met. read more

The process can be mystifying.

Soon after forbearance ended for Marvin Williams in August, he learned his loan would be transferred to another servicer.

For longer than a month, Williams said it was not clear if the new company would defer his missed mortgage payments - adding up to at least $8,000 - to the end of his loan or if he would have to pay it back sooner.

Williams, 63, said he often endured two-hour waits on the phone when trying to get in touch with the servicer. On Wednesday, the housing counselor helping him with his case was told the payments would be deferred, but Williams said he is still waiting for written confirmation. "I'm trying to hope that I’m in the right place with this," said Williams, who lives outside Rochester, New York.

Borrowers exiting forbearance can generally choose between resuming payments and having the deferred debt tacked on to the end of their mortgage; having loans modified so monthly payments are reduced; or paying back the debt by selling the home or refinancing.

The pace of forbearance exits increased in September and is expected to hit the highest pace in more than a year over the next few weeks, said Mike Fratantoni, a senior vice president and chief economist for the Mortgage Bankers Association.

Mortgage service firms hired more workers and are "well prepared" for the higher case load, Fratantoni said. "It is such a stark comparison to what happened a decade ago where coming out the great financial crisis everyone was just so frustrated with the pace of resolution."

This time, servicers - who receive payments from borrowers and disburse them to investors, tax authorities and insurers - have simplified the process for moving to alternatives so that homeowners need to provide little or no additional documentation.

About 35% of borrowers who exited forbearance in September resumed paying and deferred missed payments to the end of their loan, according to the MBA. About 28% modified their loans and 19% exited without a plan in place, including many still working toward a loan modification, said Fratantoni.

The boom in home prices, up over 30% since the pandemic began, may help. About 93% of borrowers in forbearance have at least 10% equity in their homes even after 18 months of missed payments, according to Black Knight. After the Great Recession, by contrast, 28% of borrowers owed more on their mortgages than their homes were worth.

Reporting by Jonnelle Marte in New York and Katanga Johnson in Washington; Editing by Dan Burns and Andrea Ricci
Disclaimer: The views expressed in this article are those of the author and may not reflect those of Kitco Metals Inc. The author has made every effort to ensure accuracy of information provided; however, neither Kitco Metals Inc. nor the author can guarantee such accuracy. This article is strictly for informational purposes only. It is not a solicitation to make any exchange in commodities, securities or other financial instruments. Kitco Metals Inc. and the author of this article do not accept culpability for losses and/ or damages arising from the use of this publication.