Confidence in Europe's earnings resilience has helped the continent's bourses recover from a wobble in September with the latest Refinitiv I/B/E/S data showing third quarter profits for the 600 biggest listed European companies are expected to grow 46.7% from the same period in 2020.

However, while earnings upgrades have consistently outnumbered downgrades since October last year, the weekly ratio between the two has dropped to 1.8 from a 17-year high of 26.3 in August. 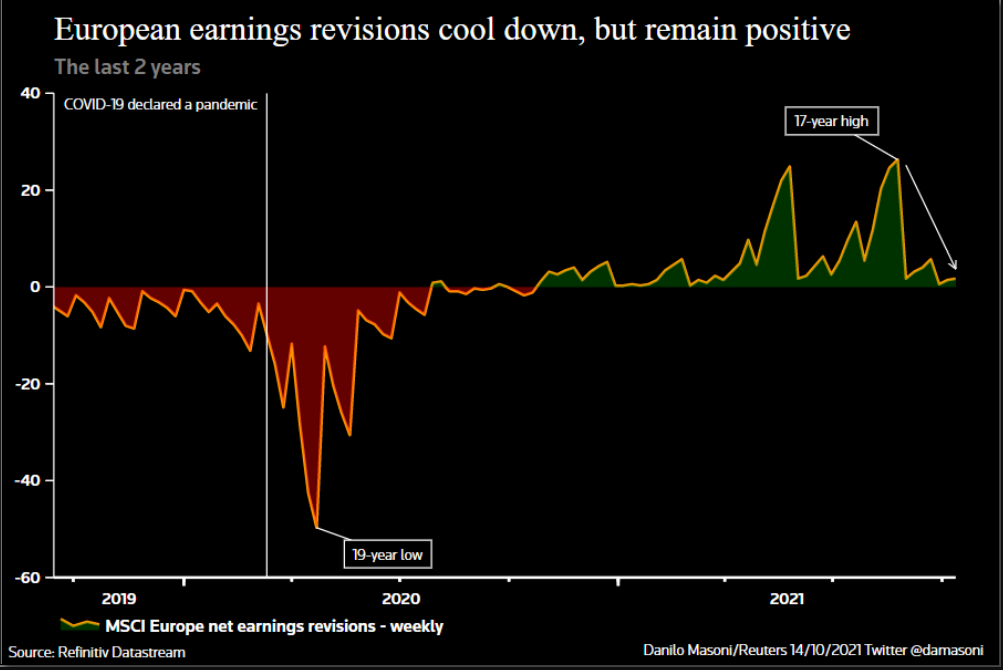 Arnaud Bauduin, fund manager at Ofi AM in Paris, says there has been a shift in sentiment linked to inflation, which hit a 13-year high here in the euro zone last month.

"We are suffering from the tail effects of COVID. The economy is not fluid and this is why we have all those problems in supply chains and then inflation," he said.

"When you look at companies, the strong momentum that we've seen in the last 12 months is starting to fade."

On Monday, the chief executive of Dutch health technology company Philips blamed "chips and ships" as it cut its financial outlook with a shortage of electronic components and a lack of shipping containers hampering production and delivery.

Shares in Belgium's Umicore also fell after the catalytic converter maker cut its 2021 core profit outlook due to the chip shortages.

Analysts at Jefferies, meanwhile, point to the risks stemming from staff shortages and the possible need to increase wages at a wide range of European companies, from Fresenius Medical Care to game video editor Ubisoft and the UK's Royal Mail.

Major central banks for the most part are cautiously sticking to their view that the inflation spike will prove transitory, but supply chain bottle necks and staff shortages raise the chance of more permanent pressures if firms adjust pricing and wage policy.

With the prospect of central banks tapering stimulus and in some cases even raising rates in an attempt to stop inflation running away, the financial sector is set to thrive.

And with oil prices climbing well above $80 a barrel to their highest in many years, energy has seen the highest number of positive weekly earnings revisions among sectors on the STOXX 600. 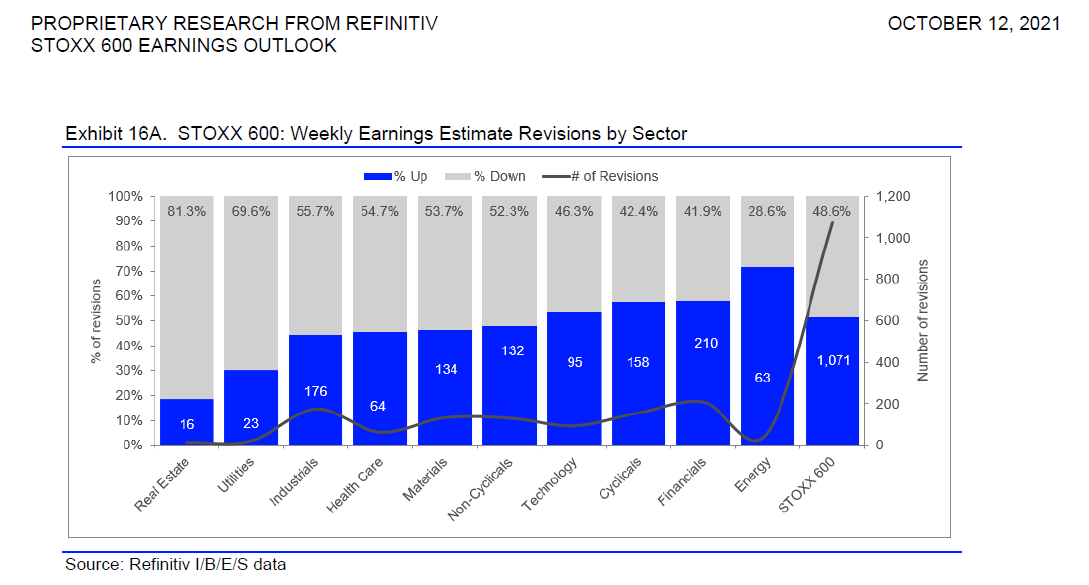 Despite the inflation worries, Fahad Kamal, CIO at Kleinwort Hambros in London, like many investors, remains upbeat on equities for the time being.

"While company CEOs are mentioning inflation a lot there has never been greater expectations for revenues, profits and margins," he said.

"We get that valuations are extended but the underlying macro backdrop is so supportive and if companies are worried about inflation, it's not showing up in the margins which are at 13-14%."