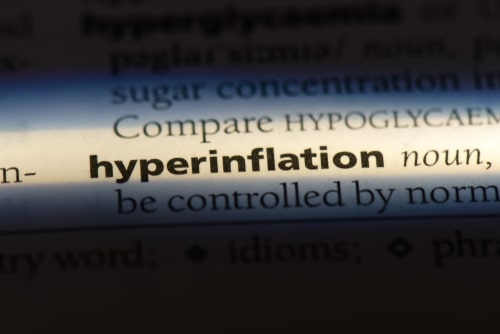 (Kitco News) The gold market seems to be coming to life with the latest move above $1,800 an ounce as markets worry about inflation running out of control.

Out-of-control inflation is the narrative dominating the market at the moment, with investors looking for safe assets to move their money to.

Over the weekend, U.S. Treasury Secretary Janet Yellen tried to reassure market participants that the U.S. is not about to lose control over inflation while noting that elevated price pressures will remain through mid-2022.

"I don't think we're about to lose control of inflation," Yellen told CNN. "On a 12-month basis, the inflation rate will remain high into next year because of what's already happened. But I expect improvement by the middle to end of next year – second half of next year."

Yellen added that she expects the supply bottlenecks to eventually resolve. It's "temporary" pain, she noted. "As we make further progress on the pandemic, I expect these bottlenecks to subside. Americans will return to the labor force as conditions improve," she said.

In its recent report, the International Monetary Fund (IMF) said the Federal Reserve should be prepared "to act quickly" if inflation gets out of control. "Central banks should chart contingent actions, announce clear triggers, and act in line with that communication," said Gita Gopinath, the IMF's economic counselor and director of research.

Gopinath clarified her stance on inflation over the weekend, telling CBS that inflation pressures will persist through mid-2022. "Inflation has indeed come up high in these last several months," Gopinath said. "We've seen commodity prices come back up after crashing last year. But we're also now seeing the frictions between supply and demand not matching up."

But the mid-2022 deadline is not convincing everyone, with new inflation warnings popping up on a daily basis.

Twitter co-founder and Square CEO Jack Dorsey sounded the hyperinflation alarm bells on Friday. "Hyperinflation is going to change everything. It's happening," he tweeted.

Hyperinflation is going to change everything. It’s happening.

Dorsey added: "It will happen in the U.S. soon, and so the world."

It will happen in the US soon, and so the world.

The comment triggered another debate among public figures in terms of which assets offer the best shelter during these uncertain times.

MicroStrategy CEO Michael Saylor stated: "Inflation is the problem. #Bitcoin is the solution."

Inflation is the problem. #Bitcoin is the solution.

Peter Schiff, chief economist at Euro Pacific Capital, rebutted that view, pointing to gold and other real assets as the only solution.

"Just don't expect to find any refuge from it in #Bitcoin. To protect yourself from #hyperinflation, you'll need to own real assets. #Gold qualifies, but Bitcoin does not," he tweeted.

Just don't expect to find any refuge from it in #Bitcoin. To protect yourself from #hyperinflation you'll need to own real assets. #Gold qualifies, but Bitcoin does not.

"Human desire to protect one's savings will lead to a rapid drop in demand for $/fiat based assets. Gresham's Law will lead people to dump unsound money like a hot potato. Btc, Au, Ag. Things can happen quickly in a connected world," he replied to Dorsey's tweet.

Agree. Human desire to protect one’s savings will lead to a rapid drop in demand for $/fiat based assets. Gresham’s Law will lead people to dump unsound money like a hot potato. Btc, Au, Ag. Things can happen quickly in a connected world.

"Dealing with inflation risks is slowly returning to centre stage after U.S. five-year breakevens hit 3% for the first time. In simple terms, bond investors are now pricing consumer inflation to average 3% over the next five years," Sayed said.

According to analysts, all this inflation talk is finally starting to help gold, which has been sitting on the sidelines.

"Gold is being lent buoyancy by the rising inflation expectations. Market-based inflation expectations in the U.S. temporarily reached a nine-year high of almost 2.7% on Friday," said Commerzbank analyst Daniel Briesemann. "The markets are pricing higher inflation in more and more, in other words, and many market participants clearly believe that the current high level of inflation is no longer merely temporary. Gold should profit from this in its role as a store of value."