ASHEVILLE, N.C., Oct 28 (Reuters) - The pandemic shuttered large parts of the U.S. economy in 2020 and may have driven hundreds of thousands of businesses into failure, but for entrepreneurs in North Carolina it triggered a wave of activity.

"When the pandemic happened the world kind of stopped. That does not mean our minds stopped," Lincoln Walters, the family life director at a local church, said in explaining why amidst a global shutdown he committed $75,000 to convert a former stove shop in nearby Black Mountain to a consignment space for local gear manufacturers, centered around an open air coffee and beer garden.

"Retail is changing. What can you do different, physically, to create space that people want to be part of? Create community...People may not need a climbing harness every day but they may need a beer to tell the story about their climb," Walters said.

It may be a leap in a world where physical retail is under stress, but ventures like the new WNC Outdoor Collective helped drive business starts in North Carolina, and the United States, to all-time highs in 2020 with another record likely in 2021. It's a development that surprised economists and is still not fully understood. According to Census data, new filings for employer identification numbers surged 57% in 2020 over the average for the prior 15 years, and are on track for a similar jump this year.

That entrepreneurial drive has been hailed as a potential return of U.S. dynamism that could feed productivity, innovation, and new jobs. It could also be one reason why some big companies are having trouble finding workers and the rate of people quitting is at a record high.

For organizations like the Federal Reserve, it is among the new dynamics that need to be more fully studied to understand how the economy may have changed because of the pandemic.

As a larger force it could fizzle. New ventures often fail, and it may take several years to determine what the surge of pandemic business creation means. Some of the sectors where business applications surged the most, such as in retail and warehousing, may be most vulnerable if the economy and spending slows, or if a new recession hits.

Still "the numbers are large," University of Maryland economist John Haltiwanger said in a presentation of initial research on pandemic business starts that he views as part of an inevitable reshuffling of labor in the post-pandemic world. 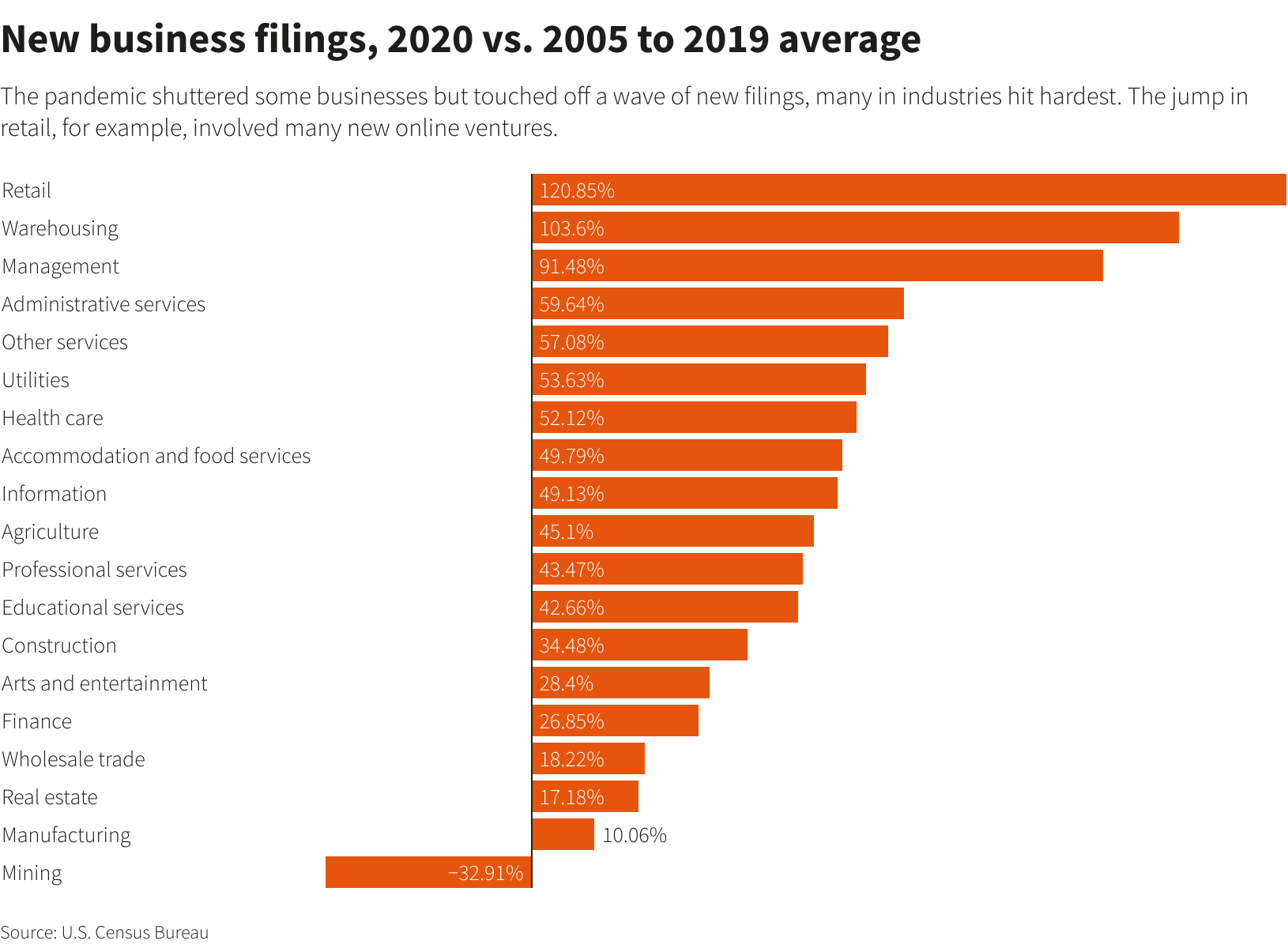 "A FORM OF LIBERATION"

Statistics from local secretaries of state, and interviews with entrepreneurs, officials and business development agencies indicate the new ventures hold potential to drive future growth and jobs, but also appear very much about self-employment -- and self-empowerment.

Brittany Hart of Jackson, Mississippi, quit her job as a hospital outpatient scheduler before the pandemic, convinced it was a dead end, and had taken a part-time position as a waitress to pay the bills as she prepared to open a salon, Halo'd Beauty and Braiding Bar.

She was still working on the salon space in March, 2020, when the pandemic hit, and "I spent many nights crying about it...I did not have a job, I couldn't take clients.”

"When life opened a little bit, people wanted to get out, get their hair done," she said. "In the moment, you think you made the worst decision of your life. But now that I am in a good groove I would never turn back. The pandemic was the perfect time to put my feet in the ground."

Analysis from the Atlanta Fed and Haltiwanger concluded that many of the new businesses are likely to remain "non-employer" firms - in effect one-person shops for people making a go at self-employment. But the number of firms with a "high propensity" to generate jobs also increased, the research found. Census data shows those high-propensity business filings up by more than 18% in 2020 over the prior average and up more than 7% in 2021 just through September. 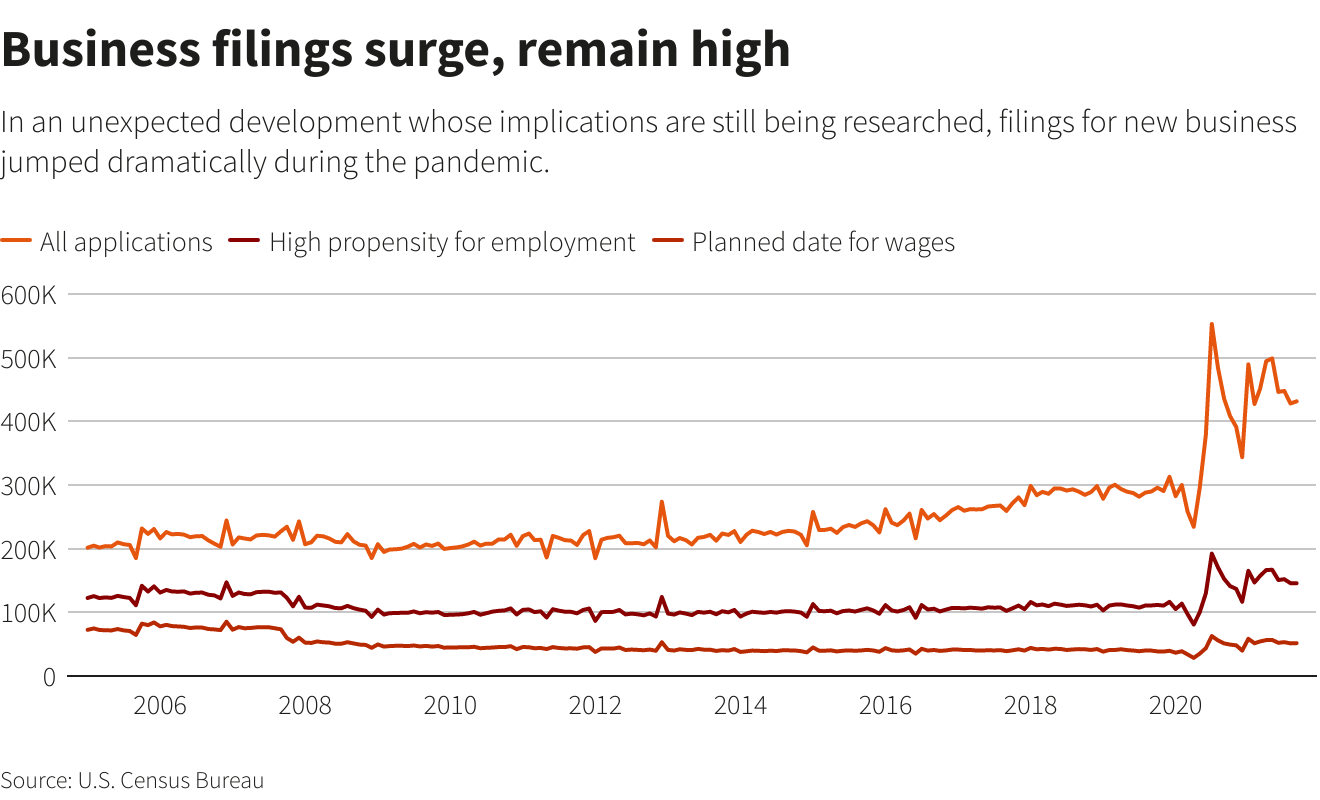 Some of the filings may reflect mere recordkeeping. Local lenders and business development experts say that in some cases people already active in different ventures filed the paperwork needed to qualify for Payroll Protection Program loans, a fact that could have inflated the headline number of pandemic business starts.

But they also agree something changed in 2020 as people, out of necessity because of a lost job or due to a desire to control their own hours and work environment, took new risks.

"Owning a business is in so many ways a form of liberation. How do I detach myself from being paid what they want to pay me?" said Tim Lampkin, chief executive of Higher Purpose, a non-profit business development group in Mississippi.

Among the poorest states in the country and with a large Black population, Mississippi saw business starts more than double in 2020 over the average since 2006, and again so far in 2021, according to Census data, one of the largest increases in the country.

Kenesha Lewis of Greenville, Mississippi, had been preparing edible fruit arrangements in her spare time out of her home, but during the pandemic demand surged for those and also for the smoothies she and her husband had begun offering. In November of 2020, before vaccines and in the midst of a new wave of national coronavirus infections, she quit her job as a bank loan specialist to focus on the business.

Kay's Kute Fruit now has a storefront in downtown Greenville and has hired 11 people.

"The pandemic for some people pulled the best out. We got married during the pandemic. Our product actually played during the pandemic," because of the combination of healthy food and delivery, said Jason Lewis, who kept his job as an assistant manager at the local Lowe's. "It was not easy but at the same time it really made us fight a little harder." 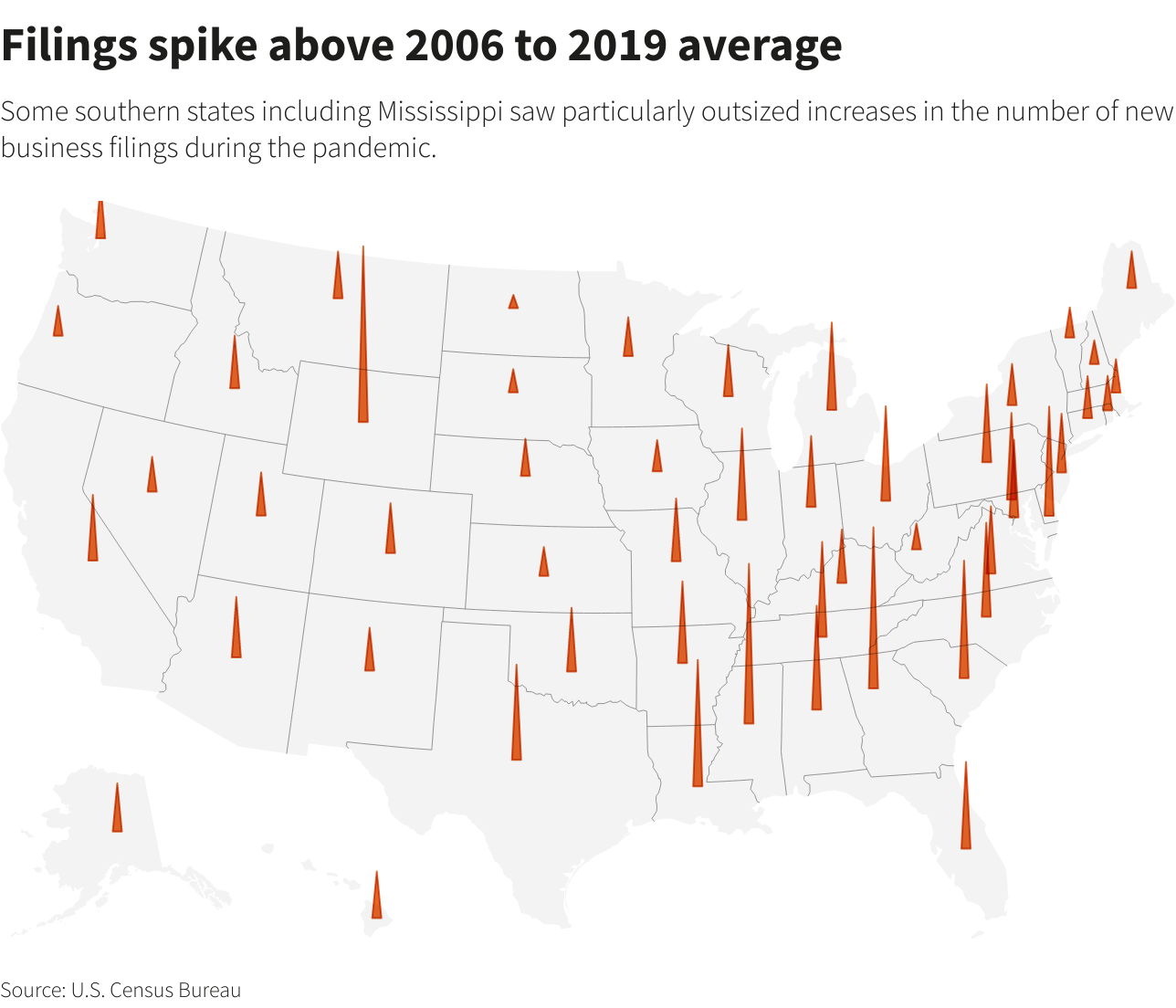 In North Carolina, deputy secretary of state William Toole said that when monthly business filings started to rise during 2020 “the hypothesis was that these are desperation filings by people who lost their job and did not know what else to do. Mom and Pops. Squeaking by. I was wrong on every count."

Follow-up surveys conducted to understand the trend found only a small number, about 12%, of respondents said they'd lost a job, while 85% said they'd identified an opportunity, many in areas like trucking or shipping that saw demand surge because of the health crisis.

"Maybe that explains why you don't see people rushing back to be waiters and housekeepers," he said, connecting the rise in business filings to the current record number of job openings.

Business owners in Asheville said the pandemic, for them, was all about adaptation -- in health executive Allison's case seizing the moment to launch a new venture around telehealth; for Karvir navigating the pandemic's limitations to retool his new hotel's staffing, cleaning and other protocols to match the workers that were available.

Longtime Asheville restaurateur Scheffer was developing his Jettie Rae's Oyster House when the pandemic struck and said despite the crash in restaurant sales "it didn't make sense to stop. It made more sense to figure how do you open up in the middle of COVID?"

That led to a new paved patio, outdoor heaters, a tent for rain, flattened staffing that had servers, hosts, foodrunners and others swap duties -- and what are now reservation-only crowds.

"We literally would wake up in the morning and adjust based on the news," as the pandemic evolved, Scheffer said.

Reporting by Howard Schneider; Editing by Andrea Ricci
Disclaimer: The views expressed in this article are those of the author and may not reflect those of Kitco Metals Inc. The author has made every effort to ensure accuracy of information provided; however, neither Kitco Metals Inc. nor the author can guarantee such accuracy. This article is strictly for informational purposes only. It is not a solicitation to make any exchange in commodities, securities or other financial instruments. Kitco Metals Inc. and the author of this article do not accept culpability for losses and/ or damages arising from the use of this publication.