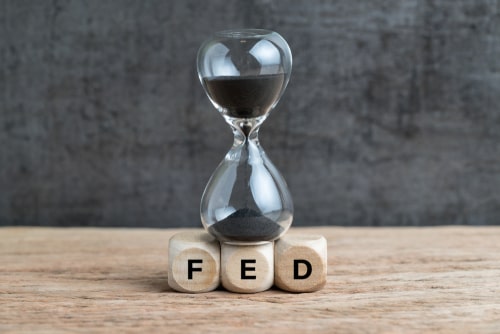 Gold's day-to-day gains are being capped at $1,800 an ounce as markets wait for the Federal Reserve highly anticipated tapering announcement on Wednesday. Close attention is also being paid to what Fed Chair Jerome Powell will say about inflation.

The taper announcement on Wednesday has already been largely priced in by the markets, said commodity strategists at TD Securities. In October, Powell already stated that "it's time to taper" but not the "time to raise rates."

Tapering could officially begin at the beginning of December, and the current $120 billion of monthly asset purchases could be wound down by mid-2022, said ABN AMRO senior U.S. economist Bill Diviney.

"Even a weak November jobs number would have been unlikely to challenge the decision to begin tightening monetary policy," Diviney said.

Despite Powell's assurances that tapering would not mean it's time to start raising rates soon, markets have already begun to anticipate a more aggressive central bank tightening.

The CME FedWatch Tool estimates a 45% chance of a rate hike in June and a 31% chance of a second one in September. The more hawkish Bank of Canada and Bank of England outlooks are also not helping the Fed's point.

TD Securities does not see the Fed bulging on the rate-hike or inflation fronts. "We don't expect any definitive new 'liftoff' signal, and we expect 'elevated' inflation will continue to be characterized as 'largely reflecting transitory factors,' but the chair will likely emphasize how tapering will lead to flexibility in responding if the economy evolves in a way that deviates significantly from expectations," the analysts said.

Economists are also watching how strongly the Fed will try to push back on those strong rate hike expectations.

"The key question going into this meeting will be to what extent the Fed pushes back against market pricing," Diviney said. "While worsening supply-chain bottlenecks and stubbornly strong goods consumption in the U.S. have raised the risk of more persistent elevated inflation, and uncertainty is high, we continue to think there is a high bar for the Fed to row back on its signaling that the end of asset purchases would not be immediately followed by rate hikes. We continue to expect the Fed to look through the current elevated inflation and to begin hiking in early 2023."

What it all means for gold

A hawkish-sounding Fed will be bullish for the U.S. dollar and could weigh on gold and vice-versa. Analysts are gearing up for a volatile session on Wednesday. "A hawkish meeting that strikes all the right notes could boost expectations over the Fed raising interest rates sooner than expected. Such an outcome could inject dollar bulls with renewed confidence ahead of the highly anticipated U.S. jobs report on Friday," said FXTM senior research analyst Lukman Otunuga.

Gold will remain very sensitive to any significant moves in the U.S. dollar, Treasury yields, or inflation expectations, added Otunuga.

"[Gold] bulls remain trapped in a sticky region with the 200-day simple moving average and $1,800 acting as the first level of resistance. Beyond this point, prices may test the October high at $1813.67, ahead of $1833.84, the highest level hit in September. Ultimately, how gold ends the week will be impacted by the Federal Reserve meeting and U.S. jobs report on Friday," he said on Tuesday.

The Fed's exit seems to be priced in, so the focus could shift to Powell's comments, which will come after the central bank releases its statement at 2 pm ET.

The good news for gold is that the downward pressure has been abating, TD Securities analysts noted. "A potential break higher would bring the $1,830/oz level into sight, which represents a key level to shift momentum toward a notable uptrend," they said.