Twin deficits may conspire to rein in rampant dollar: McGeever

ORLANDO, Fla., Nov 23 (Reuters) - Remember when twin deficits were a thing for the dollar?

It's been a long time since dollar watchers had the U.S. current account and budget gaps on their radar, but that could change next year, particularly if the global economy runs hot and the U.S. economy continues to outperform its peers.

The U.S. balance of payments position vis-à-vis the rest of the world is deteriorating. In the three months to June it was in the red to the tune of $190 billion, worth 3.4% of gross domestic product.

That may only be around half the record shortfalls of more than 6% in 2005 and 2006, but it is still the largest U.S. current account imbalance since 2007. The deficit has exceeded 3% of GDP for five consecutive quarters. 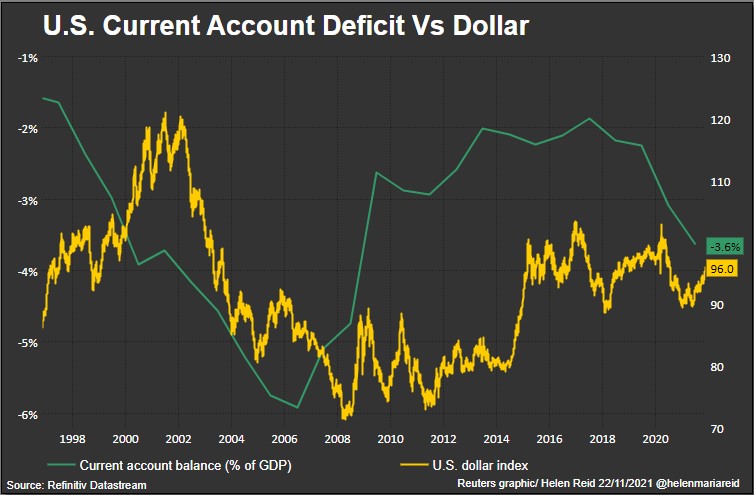 According to the non-partisan Congressional Budget Office, the federal budget deficit next year is seen exceeding $1 trillion, at least 4.7% of GDP, down substantially from a record 14.9% of GDP last year and this year's forecast 13.4%.

That shrinkage is huge. But again, it is still historically large, and, together with the current account shortfall, will require a hell of a lot of dollars flowing into the United States just to prevent the currency from weakening.

This comes as the Federal Reserve is about to unwind its $120 billion monthly purchases of U.S. Treasuries and mortgage-backed securities. By the middle of next year, it will have ceased bond-buying all together, save for reinvestments.

To be sure, deficits will not be the dollar's main driver next year. That will be the widening interest rate differential in its favor as the Fed prepares to raise rates, while other central banks - notably the ECB and BOJ - keep their powder dry.

There are two other important reasons why structural issues are unlikely to suddenly torpedo the dollar.

Second, "fair value" models for exchange rates in which balance of payment flows factor heavily may work over the long term, but are less reliable for shorter periods.

But dollar bulls would be wise not to be complacent about the twin deficit issue.

"You can rest assured it will be the first port of call if the dollar starts to consistently weaken," reckons Deutsche Bank strategist Alan Ruskin.

He suggests that a current account deficit of 4% or more of GDP be a warning sign for the dollar, and a more significant downdraft for the currency would follow in the unlikely event that it reaches 5% or more.

The dollar is paying no heed to the widening imbalance. Supported by the Fed gearing up for interest rate liftoff in 2022, it is up 7% so far this year against a basket of major currencies, on track for its biggest rise in six years. read more

But analysts at Goldman Sachs argue that the wide U.S. current account deficit implies that the dollar is over-valued by as much as 13%. They calculate that a deficit of around 2.5% of GDP is a sustainable norm, so the current level is a headwind to the dollar.

"If the current account deficit remains wide even as fiscal stimulus fades, dollar weakness may eventually be required to achieve external balance," they write, forecasting an average deficit next year of 3.2% of GDP.

Where are the inflows going to come from? Wall Street's relentless rally this year has attracted worldwide demand for U.S. stocks, creating a virtuous cycle of rising asset prices and inflows.

The S&P 500 is up 25% so year to date, and could make a new record for fresh all-time highs in a calendar year. Alex Etra at Exante Data calculates that financing of the current account deficit is increasingly coming from European equity investors in the place of overseas reserves managers.

If imbalances continue to grow, pressure on the dollar will surely intensify, he warns. 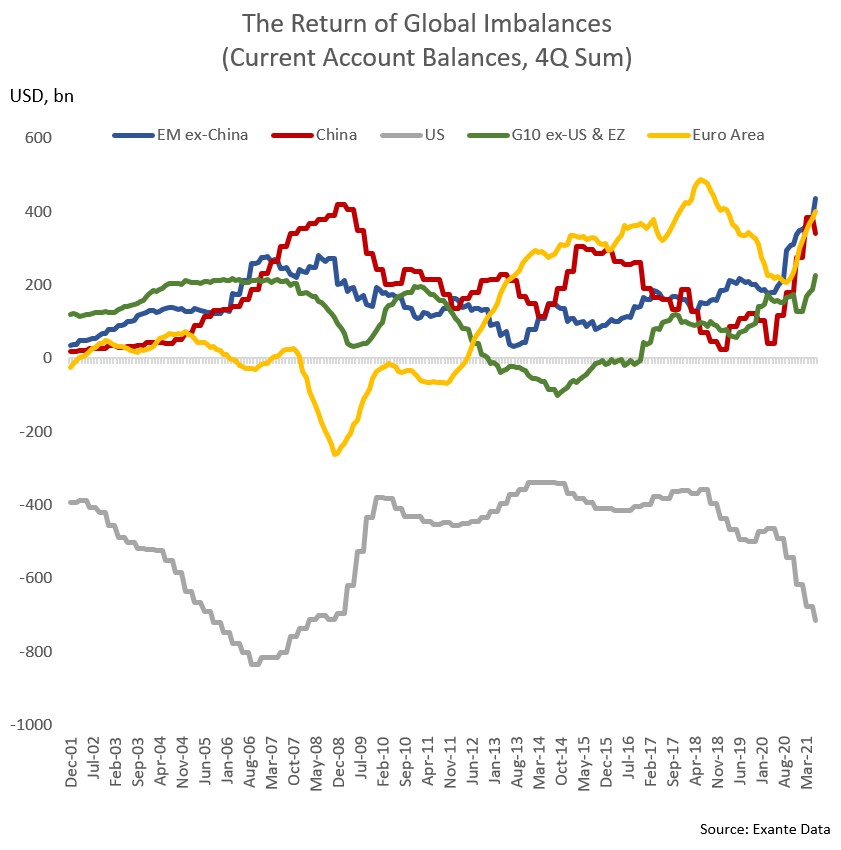 But Daragh Maher, head of research Americas at HSBC, counters that the U.S. twin deficits have been a constant feature for the past 50 years, and that the dominant narrative for the dollar has either been risk appetite or relative rates.

"Right now, it's relative rates, and the structural story is story is secondary, at best," he notes.

Writing by Jamie McGeever; Editing by Alison Williams
Disclaimer: The views expressed in this article are those of the author and may not reflect those of Kitco Metals Inc. The author has made every effort to ensure accuracy of information provided; however, neither Kitco Metals Inc. nor the author can guarantee such accuracy. This article is strictly for informational purposes only. It is not a solicitation to make any exchange in commodities, securities or other financial instruments. Kitco Metals Inc. and the author of this article do not accept culpability for losses and/ or damages arising from the use of this publication.