Nov 24 (Reuters) - As Federal Reserve Chair Jerome Powell looks forward to four more years at the helm of the world's most powerful central bank, attention is turning to the increasing likelihood he and his fellow policymakers will wean the U.S. economy off emergency support faster in the face of high inflation and strong job gains.

All signs point to that approach being firmly on the table, with economic data earlier on Wednesday showing the number of Americans filing new claims for unemployment benefits last week fell to the lowest level since 1969, and one of the U.S. central bank's most cautious policymakers saying she is open to a quicker removal of stimulus in the face of "eye-popping" inflation. read more

In renominating Powell to a second term as Fed chief on Monday, U.S. President Joe Biden made plain that both the administration and the central bank would take steps to tackle the soaring costs of everyday items, including food, gasoline and rent. Inflation in October rose at its fastest annual pace in 31 years, testing the Fed's working assumption that the COVID-19 pandemic-induced burst would be temporary.

The beginnings of the debate among Fed policymakers on how quickly they should do away with their monthly asset purchase program could emerge on Wednesday when the central bank publishes minutes of its latest policy meeting.

Fed officials agreed at the Nov. 2-3 meeting to begin reducing the $120 billion in monthly purchases of Treasuries and mortgage-backed securities - a program introduced by the Fed in 2020 to help nurse the economy through the pandemic - with a timeline that would see them tapered completely by next June.

But they left open the possibility that the pace of the slowdown in asset purchases could be altered, and eyes are now fixed on what would necessitate a speedier withdrawal.

"The meeting minutes will be closely scrutinized over how high the bar is to adjust the pace of tapering," said Sam Bullard, a senior economist at Wells Fargo. 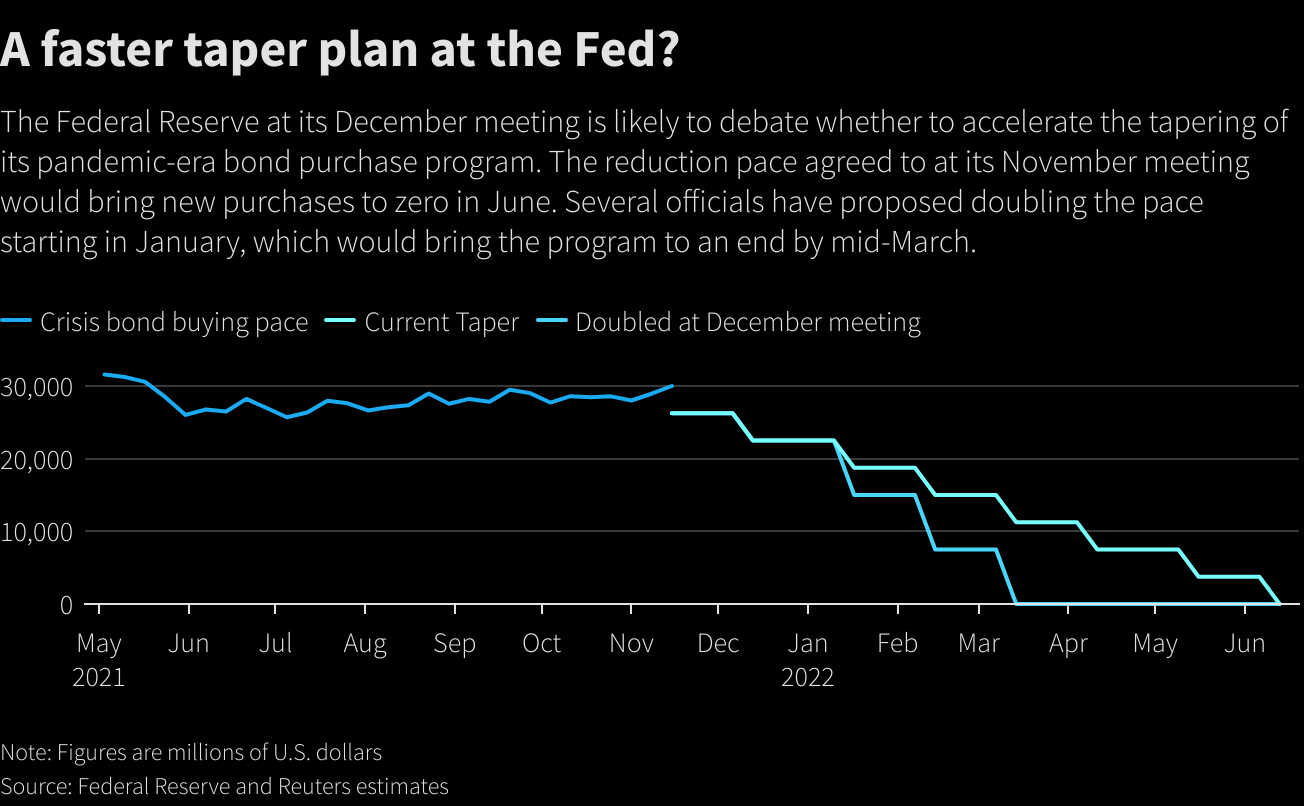 Since the November meeting, economic data has shown a reacceleration in job gains and a surge in retail sales, but most striking has been the degree to which inflation has failed to ebb as Powell and others at the Fed had expected. The Labor Department's benchmark for consumer price inflation shot up to a 6.2% annual pace last month.

Investors are now betting the Fed will have to raise interest rates three times next year, with some markets reflecting the kickoff to higher borrowing costs coming as early as May. 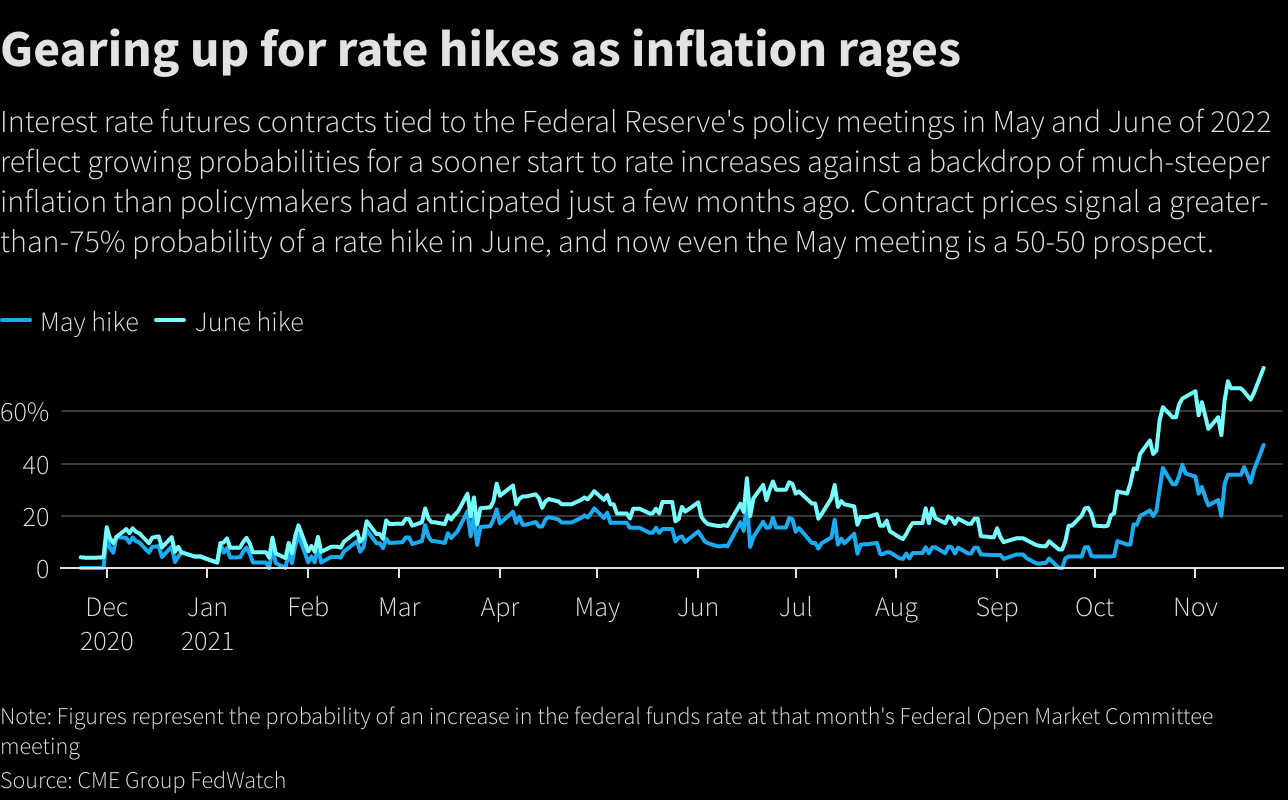 The policy meeting readout on Wednesday will also likely provide more details on the depth of ill-feeling on inflation among policymakers, most of whom spent the first part of the year insisting the surging prices would be short-lived as supply-chain wrinkles were ironed out as the economy reopened.

"In May it was easy to dismiss, but with each passing month they are taking it more seriously. And they probably feel more comfortable acting given the improvement of the labor market ... full employment is closer on the horizon," said Michael Feroli, chief U.S. economist at JPMorgan.

Fed Vice Chair Richard Clarida, who will be replaced by Lael Brainard, a current member of the Fed's Board of Governors, early next year when his term expires, said last week that discussion of speeding up the bond-buying taper to give greater flexibility on how early to raise the central bank's benchmark overnight interest rate from its current near-zero level will be on the agenda at the Dec. 14-15 policy meeting.

That was the latest sign that policymakers are now deeply attuned to the path of inflation pressures, which have intensified and broadened, causing a headache for Powell, who reworked the Fed's policy framework last year to prioritize its maximum employment goal.

Powell, who would begin his second term as Fed chief in February if his renomination is confirmed by the U.S. Senate, still expects inflation to dissipate by the end of next year, though he noted, while standing alongside Biden at the White House on Monday, that the Fed is keenly focused on price pressures.

Some other more patient policymakers have suggested they are now more comfortable with an interest rate rise earlier next year than previously anticipated, noting that the current pace of job gains would put the Fed on track to be near or at its maximum employment goal by the middle of 2022.

Even San Francisco Fed President Mary Daly, who until this week argued against haste in removing policy accommodation, told Yahoo Finance on Wednesday she would look at inflation and jobs data before the next meeting and "if things continue to do what they've been doing, I would completely support an accelerated pace of tapering." Daly added that, while her own outlook was still for one interest rate rise in 2022, "it wouldn't surprise me at all if it's one or two by the latter part of next year."

Inflation is not expected to peak until the first quarter of next year before beginning to subside, which means there will be no easy resolution to the inflation debate.

"In the meantime, what the Fed has to worry about is: Does this feed into wage and inflation expectations? If that is the case, then they do need to move more quickly," said Kathy Bostjancic, chief U.S. financial economist at Oxford Economics.

Reporting by Lindsay Dunsmuir; Editing by Dan Burns and Paul Simao
Disclaimer: The views expressed in this article are those of the author and may not reflect those of Kitco Metals Inc. The author has made every effort to ensure accuracy of information provided; however, neither Kitco Metals Inc. nor the author can guarantee such accuracy. This article is strictly for informational purposes only. It is not a solicitation to make any exchange in commodities, securities or other financial instruments. Kitco Metals Inc. and the author of this article do not accept culpability for losses and/ or damages arising from the use of this publication.