BUENOS AIRES, Nov 24 (Reuters) - Argentine bonds are plumbing back into default territory as political risk has risen and while talks have dragged with the International Monetary Fund to revamp some $45 billion in debts the grains producing country cannot pay.

The South American nation, hit in recent years by economic and currency crises, restructured its foreign debt with private creditors late last year, which saw bond prices rise back towards 40-50 cents on the dollar.

Prices have sunk back, however, hit by slow-moving talks with the IMF and a complex political environment after the ruling Peronist coalition lost badly in midterm legislative elections this month, which erased its majority in the Senate.

The result was telegraphed by a sharp loss in open primary elections in September that led to a major Cabinet reshuffle.

A JP Morgan country risk for Argentina rose 22 units to scrape 1,819 basis points on Wednesday, the highest level since the debt restructuring last year. Local economist Gustavo Ber said that was on par with "default levels".

"Argentine debt is sinking without a floor beneath it and the weighted average price is close to the post-restructuring minimum reached in March," Argentina financial consultancy Portfolio Personal Inversiones said. 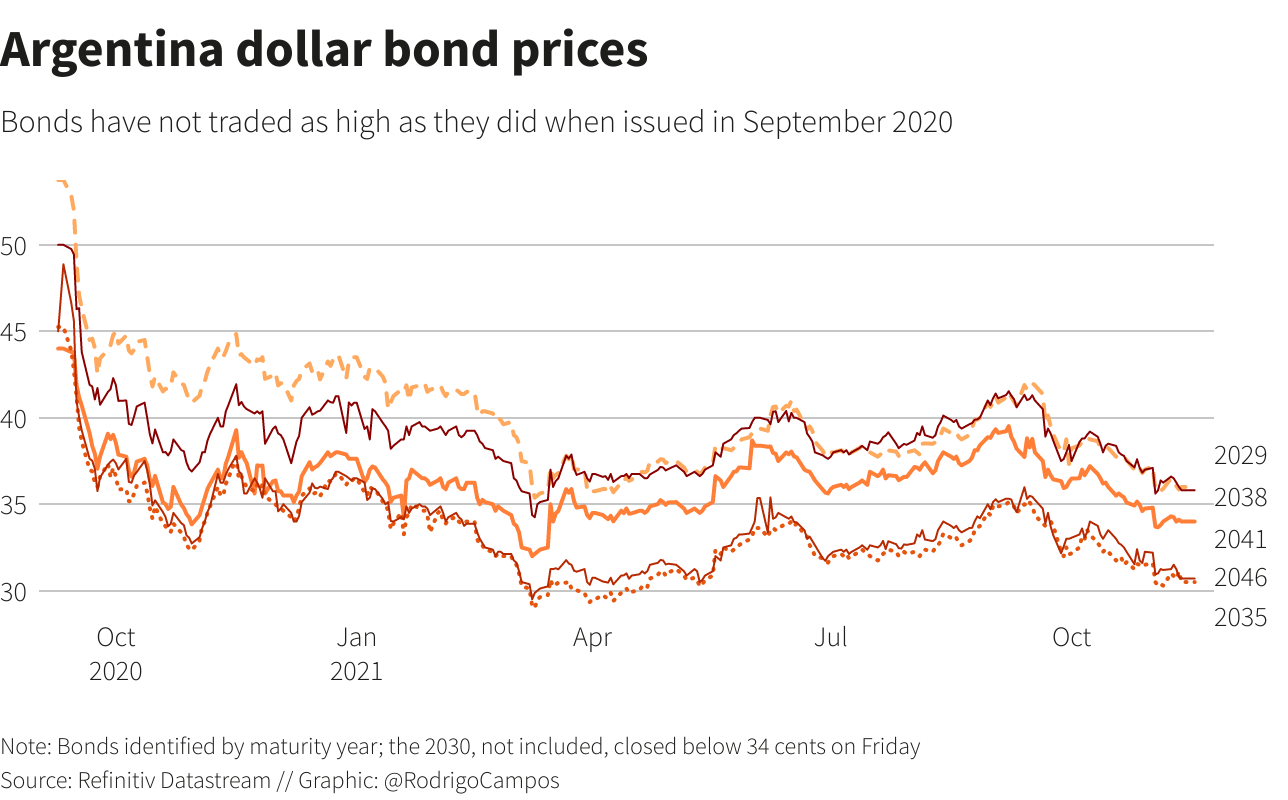 Argentina's government intends to agree on a new economic plan with IMF staff before sending it to Congress next month, Economy Minister Martin Guzman said last week, but sticking points remain in the talks over how to cut the fiscal deficit.

Guzman and President Alberto Fernandez have said that any deal has to avoid belt tightening, with the country in dire need of faster growth to arrest a rise in poverty levels.

"Traders have doubts about the possibility of reaching a consensus among the main political parties, which is essential to be able to move towards an agreement with the IMF," Ber said.

Argentina is battling high inflation running at over 50% annually, a wide fiscal deficit and exchange rate pressures that have driven the price of dollars in alternative markets to twice the official rate, with strict capital controls in place.

Noelia Bisso, an analyst at Rava Bursatil, added that bond prices had further to fall if talks the IMF dragged on.

"Bonds could continue on this path if there is no concrete progress with the IMF," she said.

Reporting by Jorge Otaola and Hernan Nessi, writing by Hugh Bronstein; additional reporting and graphics by Rodrigo Campos; Editing by Adam Jourdan and David Gregorio
Disclaimer: The views expressed in this article are those of the author and may not reflect those of Kitco Metals Inc. The author has made every effort to ensure accuracy of information provided; however, neither Kitco Metals Inc. nor the author can guarantee such accuracy. This article is strictly for informational purposes only. It is not a solicitation to make any exchange in commodities, securities or other financial instruments. Kitco Metals Inc. and the author of this article do not accept culpability for losses and/ or damages arising from the use of this publication.