It is a risky proposition. Biden is trying to craft a more constructive relationship on climate change and trade out of complex ties between two nations with opposing political systems that are locked in an economic arms race. The two countries have just emerged from a trade war in 2020.

"This is a new era of oil diplomacy for the U.S. to coordinate with India and China" said Daniel Yergin, an oil historian and the vice chairman of IHS Markit. Cooperation with China is likely to stick to energy and environment.

"Climate and energy are in a separate category from all the tough issues that need to be dealt with between the two countries," Yergin said.

China has yet to detail when and what it would release from its strategic reserves, a day after the U.S. announced the coordinated release. Oil markets have anticipated action from China, where officials have said they are working on a release to meet China's domestic demand.

The risk for Biden was clear on Wednesday, when Chinese state media declared Beijing had the "upper hand" in the oil reserve plan. Japan and India, in contrast, were quick to detail their plans after the U.S. announcement.

The Biden administration's diplomatic inroads with China first surfaced in Glasgow, Scotland this month where the two countries hammered out a surprise deal on boosting action on climate change including reducing emissions of methane, a powerful greenhouse gas.

"Glasgow showed that there is some level of common interest and diplomacy that can be successful between the United States and China," said Amy Myers Jaffee, a research professor at Tufts University and expert on global energy markets and climate.

Jaffee said both countries recognized the importance of a global climate agreement. "I would say 'Ditto' on the oil market," Jaffee said.

Washington has stark differences with Beijing on trade issues and human rights concerns related to Xinjiang, Hong Kong, Tibet and Taiwan. Beijing has backtracked from agreements with the United States before, including an extensive trade deal with the Trump administration that was nixed at the last minute.

But the world's top two economies would benefit from energy cooperation given their need to keep fuel and power costs down for consumers and industry.

China has already released oil from reserves this year. Beijing held the first ever release of oil from its reserve in September, which aimed to stabilize prices and deal with localized supply shortages.

Combined, the United States and China consume nearly 35 million barrels of oil a day, more than a third of global demand. Even though the United States has become one of the world's largest oil producers, it is still the second-largest importer of crude, trailing only China.

As the top oil importers, their roles in international politics coincide to some degree and place them in an adversarial relationship with the leaders of OPEC and its allies: Saudi Arabia and Russia.

China now imports more than 10 million barrels of oil a day, The United States imports about 6 million barrels per day, though in recent years it has sharply reduced its dependency on OPEC producers, with most of its imports now from Canada.

The broader group of countries that are working with the United States to release oil from their reserves - India, Japan and South Korea - rank third, fourth and fifth among global oil importers, respectively.

U.S. oil prices hit a seven-year high in late October driving inflation and hitting Biden's approval rating ahead of midterm elections next year. With razor thin majorities in both chambers of Congress, Biden's fellow Democrats can ill afford to lose seats in 2022. 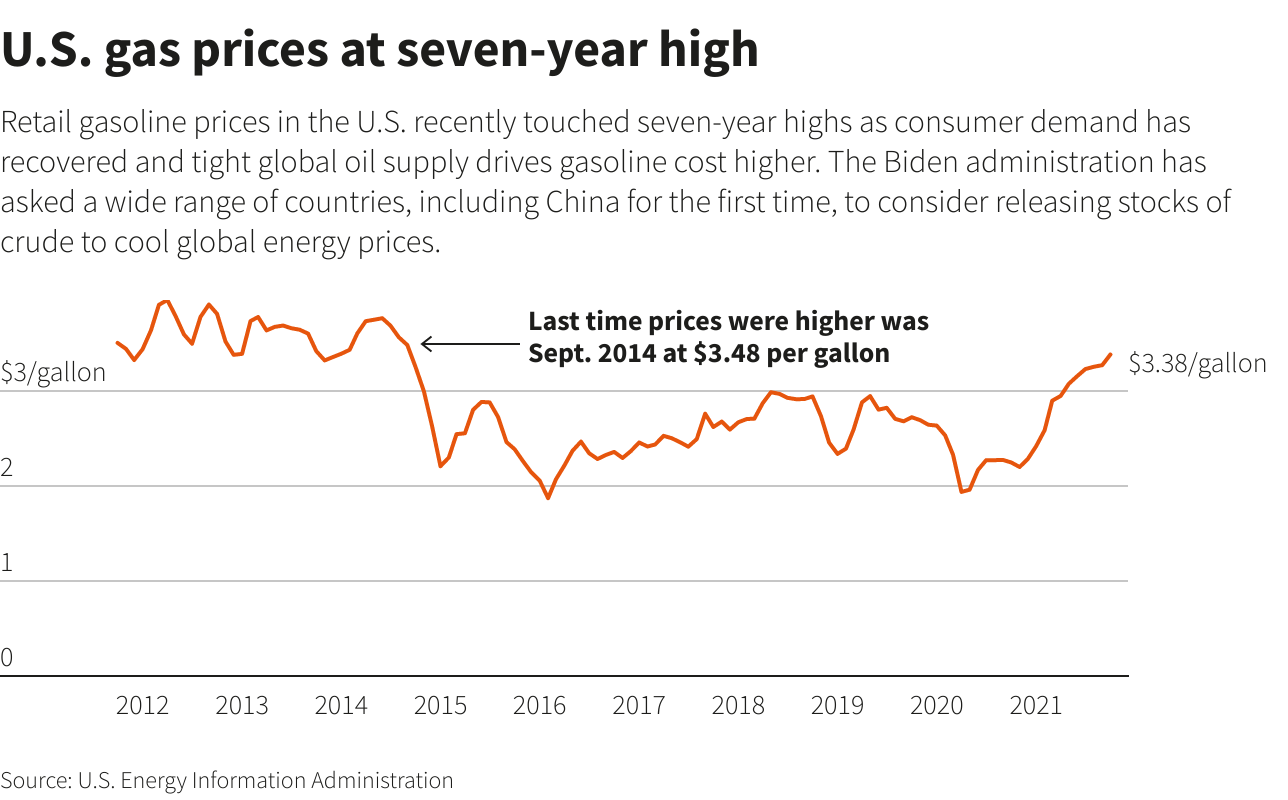 Biden could take additional action in coordinating with other countries to maintain supply as the COVID-19 pandemic eases, the White House in a statement Tuesday.

Actually doing so may not be easy.

"Not only could U.S.-China tensions complicate further cooperation, but the U.S. stands apart from other strategic reserve holders in that its legislature has ordered the

selling off of strategic stockpiles" to finance government programs, ClearView Energy Partners, a nonpartisan research group, said in a note to clients.

Some 18 million barrels of the U.S. release was simply a front-loading of required sales that were mandated by Congress in recent years.

There's a risk that consumer countries and producing countries could keep upping the ante with opposing announcements on global oil supplies, a prospect that would likely make oil prices even more volatile, or what Yergin calls a "bloc versus bloc," scenario.

But in the short term, the action by consuming countries is likely to put pressure on oil prices, Yergin said.

"This also comes at a time when the supply/demand balance is on a course to improve over the next few months, and this oil deal will add to that. What it means at least for now is you’ll hear a lot fewer predictions about $100 oil."

Reporting By Timothy Gardner and Jarrett Renshaw; additional reporting by Jessica Resnick-Ault; Editing by David Gaffen, Heather Timmons and Alistair Bell
Disclaimer: The views expressed in this article are those of the author and may not reflect those of Kitco Metals Inc. The author has made every effort to ensure accuracy of information provided; however, neither Kitco Metals Inc. nor the author can guarantee such accuracy. This article is strictly for informational purposes only. It is not a solicitation to make any exchange in commodities, securities or other financial instruments. Kitco Metals Inc. and the author of this article do not accept culpability for losses and/ or damages arising from the use of this publication.