LONDON, Nov 24 (Reuters) - Stocks recovered some lost ground on Wednesday as crude prices lifted oil companies, but rising COVID-19 cases in Europe, weaker economic sentiment in Germany and a bagful of U.S. data ahead of Thanksgiving were a focus for investors.

The STOXX index (.STOXX) of 600 European companies was up 0.4%, recovering from hitting three-week lows on Tuesday due to worries over rising infection rates across mainland Europe leading to lockdowns. Trading around 481 points, the index is still only about 10 points from last week's record high.

The MSCI world stock index (.MIWD00000PUS) was flat at 749 points, about 10 points below its lifetime high of a week ago

"People are struggling to determine whether or not the move down this week was the beginning of a correction, a test lower, or just uncertainty driving flows," said Mike Hewson, chief markets analyst at CMC Markets.

"The big concern is further lockdowns, that is what dominates sentiment, and what would that do for European Central Bank policy," Hewson said.

Germany's Ifo index of business sentiment in November was 96.5, compared with a Reuters consensus forecast of 96.6.

Ifo said the fall in business morale in Europe's biggest economy is a concern, with growth expected to stagnate in the fourth quarter as companies cope with supply chain bottlenecks.

Investors face a welter of data in the United States later in the day ahead of Thursday's Thanksgiving holiday, including the PCE index, an inflation index closely watched by the Federal Reserve.

U.S. inflation has surged to three-decade highs, and the minutes from the Fed's last meeting will also be pored over for clues as to whether the central bank will accelerate tapering of its bond buying stimulus programme when it meets next month.

"There's a risk that the Fed may speed up tapering and that in turn means the timetable for tightening may be brought forward, contributing to the stronger dollar," said currency strategist Sim Moh Siong at Bank of Singapore.

UniCredit bank told clients that investors will be looking to the minutes to see whether divergences between the doves and hawks are growing or not.

Share markets were nervous in Asia as trading was buffeted by a step-up in U.S. Treasury yields as well as volatile oil prices in the face of price-cooling moves by the United States and other nations.

Oil prices rose, extending gains from the previous session, as investors remained sceptical about the effectiveness of a U.S.-led release of oil from strategic reserves in a bid to cool prices after repeated calls for more crude failed to sway OPEC+ producers. read more

Overnight, yields on 10-year U.S. Treasury notes rose more than 5 basis points (bps) to as high as 1.684% before easing to 1.6531%. Two-year U.S. Treasury yields slipped having touched their highest level since March 2020 on Monday.

Otherwise, currency markets paused for breath on Wednesday as the dollar largely held onto recent gains against most peers on the back of rising Treasury yields.

Non-interest bearing gold, which had reacted poorly to the rise in Treasury yields, recovered a little. The spot price was last at $1,792 up 0.16% but still close to Tuesday's two-week low.

New Zealand's central bank raised interest rates for the second time in as many months on Wednesday, driven by inflationary pressures and as an easing of coronavirus restrictions supported economic activity.

However, with markets having been open to the possibility of a larger hike, the New Zealand dollar weakened 0.45% to $0.69180.

The Turkish lira remained under pressure, falling 2.3% in to 12.52 per dollar after a historic nosedive on Tuesday as President Tayyip Erdogan defended recent rate cuts and vowed to win his "economic war of independence". read more 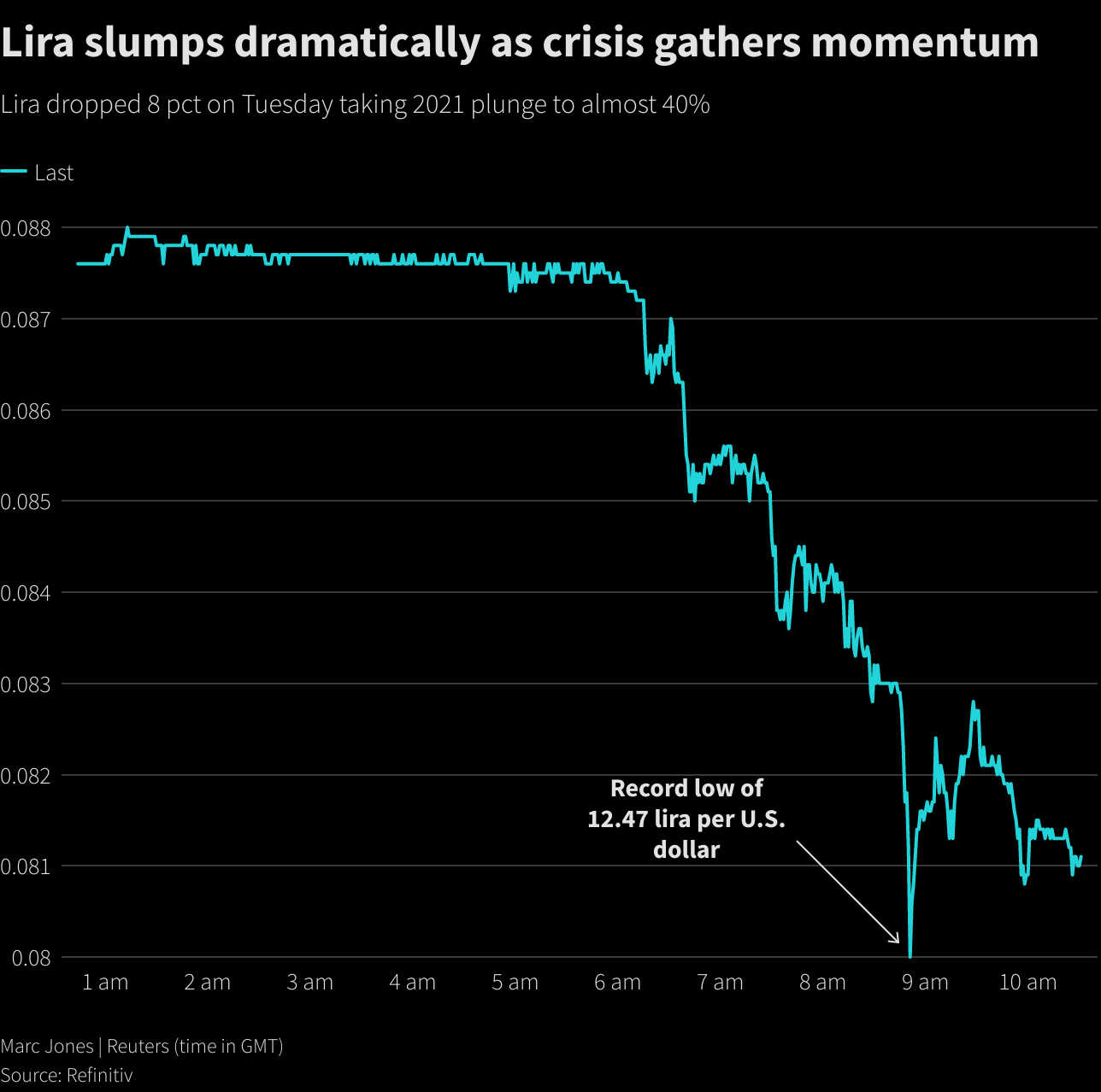 Reuters Graphics
Additional reporting by Alun John, Hideyuki Sano in Tokyo; Editing by Christopher Cushing, Kim Coghill and Giles Elgood
Disclaimer: The views expressed in this article are those of the author and may not reflect those of Kitco Metals Inc. The author has made every effort to ensure accuracy of information provided; however, neither Kitco Metals Inc. nor the author can guarantee such accuracy. This article is strictly for informational purposes only. It is not a solicitation to make any exchange in commodities, securities or other financial instruments. Kitco Metals Inc. and the author of this article do not accept culpability for losses and/ or damages arising from the use of this publication.