WASHINGTON, Nov 24 (Reuters) - The number of Americans filing new claims for unemployment benefits dropped to a 52-year low last week, suggesting economic activity was accelerating as a year marked by shortages, high inflation and an unrelenting pandemic draws to a close.

The plunge in claims reported by the Labor Department on Wednesday was, however, exaggerated by difficulties adjusting the data for seasonal fluctuations this time of the year. Still, the labor market is tightening, with jobless rolls shrinking in mid-November to the smallest since March 2020 when the economy was in the grips of the first wave of COVID-19 infections.

The economy's strengthening tone was confirmed by other data showing strong consumer spending in October as well as business orders for equipment, excluding transportation. The goods trade deficit narrowed sharply last month amid a surge in exports.

But prices remained stubbornly high, with inflation surging by the most in nearly 31 years. The raft of solid reports ahead of Thursday's Thanksgiving holiday prompted economists to boost their fourth-quarter growth estimates to as high as an 8.6% annualized rate.

"There might be some seasonal adjustment problems, but the handwriting is on the wall and all the anecdotal reports on how companies cannot find the help they need are true," said Christopher Rupkey, chief economist at FWDBONDS in New York.

"The economy will finish the year with a bang, there is lots to give thanks for."

Initial claims for state unemployment benefits tumbled 71,000 to a seasonally adjusted 199,000 for the week ended Nov. 20, the lowest level since mid-November 1969.

Economists polled by Reuters had forecast 260,000 applications for the latest week. The decline pushed applications below their pre-pandemic average of about 220,000.

Unadjusted claims rose 18,187 to 258,622 last week amid a surge in Virginia, which offset declines in California, Kentucky and Missouri. More volatility is likely over the holiday season.

"The claims series can be noisy and especially choppy around holidays like Thanksgiving when the seasonal factors anticipate large swings in the underlying data," said Daniel Silver, an economist at JPMorgan in New York. "But even so, initial claims fell by more than a half million over the year through Nov. 20, both before and after seasonal adjustment."

Claims have declined from a record high of 6.149 million in early April 2020, and are now viewed as consistent with a healthy labor market, though an acute shortage of labor caused by the pandemic is hindering faster job growth.

But there is hope for an expansion of the labor pool. The number of people continuing to receive benefits after an initial week of aid dropped 60,000 to 2.049 million in the week ended Nov. 13, a 20-month low, the claims report showed. 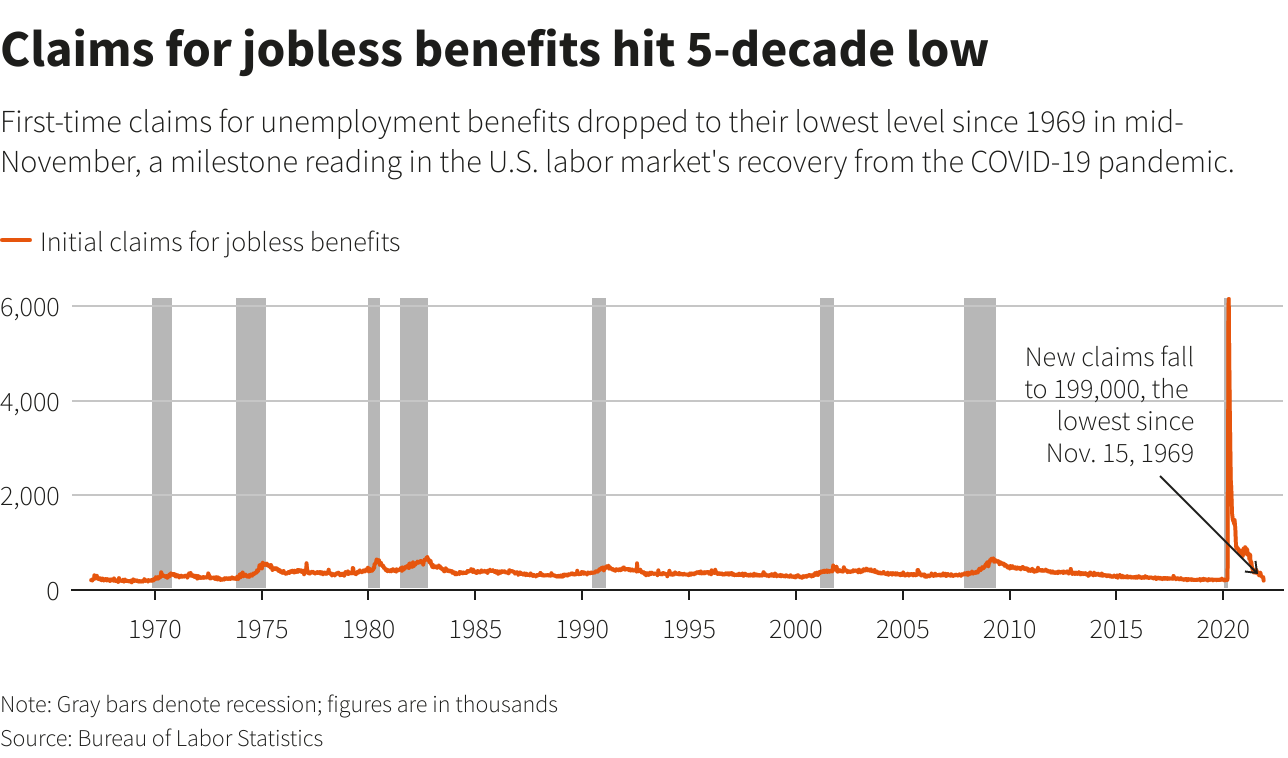 There were 10.4 million job openings as of the end of September. The workforce is down 3 million people from its pre-pandemic level, even as generous federal government-funded benefits have expired, schools have reopened for in-person learning and companies are raising wages.

Stocks on Wall Street were mixed. The dollar gained versus a basket of currencies. U.S. Treasury prices rose.

Signs the economy was regaining momentum after hitting a speed bump in the July-September quarter as coronavirus cases flared up over summer and shortages became more widespread could result in the Federal Reserve quickly winding up its bond-buying program.

"We see the Fed accelerating tapering in January to clear the runway for a September rate liftoff," said Lydia Boussour, lead U.S. economist at Oxford Economics in New York.

A separate report from the Commerce Department on Wednesday showed gross domestic product increased at a 2.1% rate in the third quarter. That was a slight upward revision from the 2.0% pace estimated in October, but was still the slowest in more than a year. The economy grew at a 6.7% rate in the second quarter.

But that is all in the rear-view mirror. A third report from the Commerce Department showed consumer spending, which accounts for more than two-thirds of U.S. economic activity, jumped 1.3% in October after rising 0.6% in September.

Consumers, buoyed by rising wages and massive savings, bought motor vehicles and traveled, showing no signs yet of holding back because of high inflation. 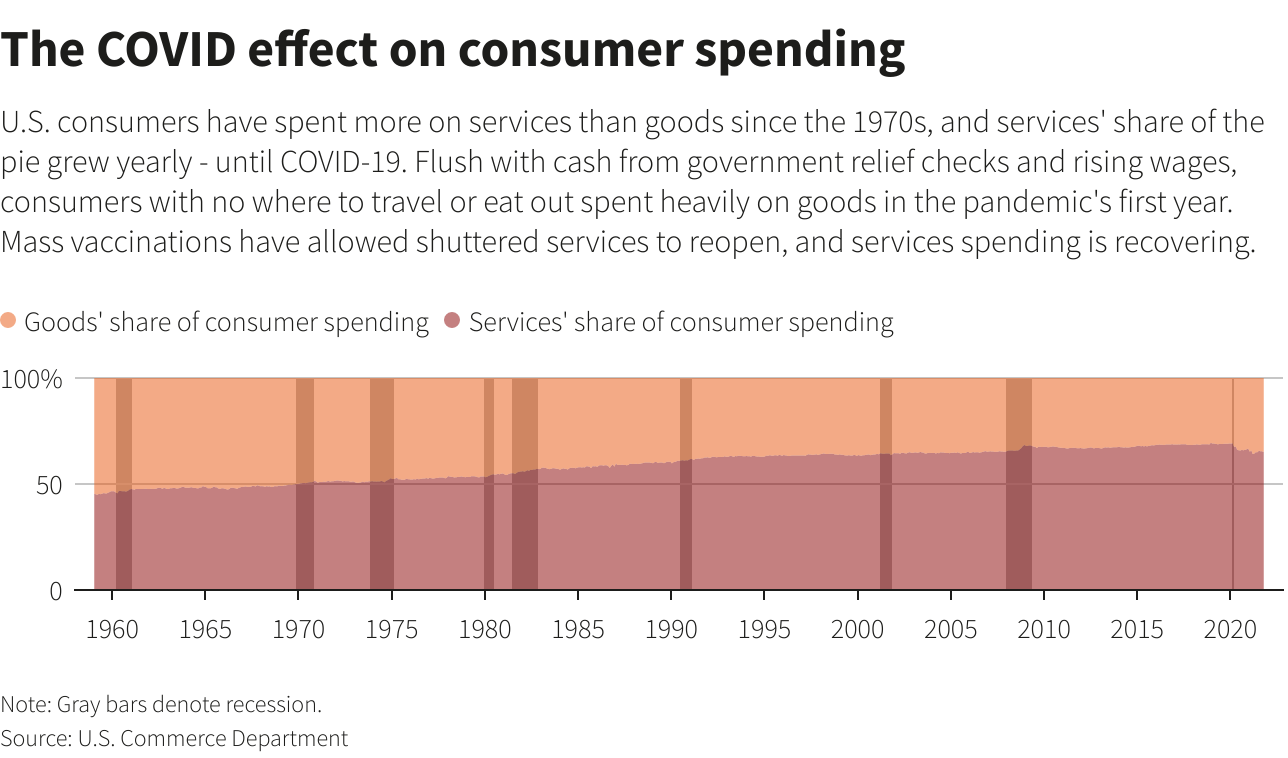 Global economies' simultaneous recovery from the pandemic, fueled by trillions of dollars in relief money from governments, has strained supply chains, unleashing inflation.

The personal consumption expenditures (PCE) price index, excluding the volatile food and energy components, increased 0.4% last month after gaining 0.2% in September. In the 12 months through October, the so-called core PCE price index accelerated 4.1%. That was the largest gain since January 1991 and followed a 3.7% year-on-year advance in September.

More goods were exported in October, helping to sharply narrow the goods trade deficit by 14.6% to $82.9 billion. If the trend holds, trade could contribute to GDP growth this quarter.

Inventory accumulation, the key driver of GDP growth last quarter, will likely continue to support the economy. The strong data flow led the Atlanta Fed to raise its fourth-quarter GDP growth estimate to an 8.6% rate from an 8.2% pace. JPMorgan boosted its forecast to a 7.0% pace from a 5.0% rate.

Reporting by Lucia Mutikani; Editing by Paul Simao, Chizu Nomiyama and Andrea Ricci
Disclaimer: The views expressed in this article are those of the author and may not reflect those of Kitco Metals Inc. The author has made every effort to ensure accuracy of information provided; however, neither Kitco Metals Inc. nor the author can guarantee such accuracy. This article is strictly for informational purposes only. It is not a solicitation to make any exchange in commodities, securities or other financial instruments. Kitco Metals Inc. and the author of this article do not accept culpability for losses and/ or damages arising from the use of this publication.