News that euro zone inflation soared to its highest rate on record this month tempered the rally in bond prices, which move in the opposite direction to yields. Still, it was the Omicron headlines that held sway for now.

Drugmaker Moderna's CEO (MRNA.O) said COVID-19 vaccines were unlikely to be as effective against Omicron as they have been against the Delta version, sparking a new selloff in world stocks. read more

Caution from U.S. Federal Reserve chief Jerome Powell encouraged investors to snap up bonds as they scaled back their expectations for a first rise in U.S. rates. In prepared comments to be delivered later to U.S. lawmakers, Powell said the variant posed downside risks to the economy. read more

The yield on 10-year German Bunds -- regarded as one of the safest assets in the world -- fell to its lowest since September at -0.363% before pulling back slightly.

It is down roughly 25 bps in November and set for one of its biggest monthly falls of the past two years. 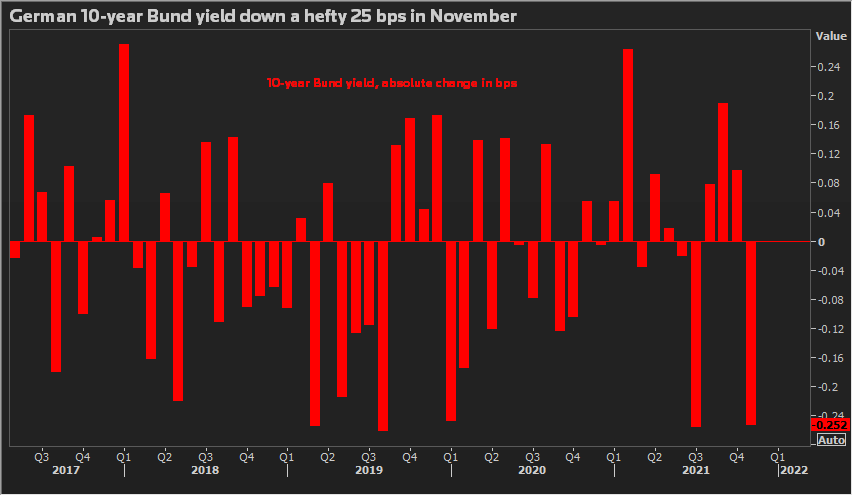 "You have this new variant and no one is sure about the severity of the illness," said Lyn Graham-Taylor, senior rates strategist at Rabobank in London.

"The flip side is that if it turns out not be as bad as feared, then we get a big risk on move. So we are in this phase where there will be choppiness until we get more clarity."

U.S. 10-year Treasury yields tumbled roughly 10 bps to around 1.44% as investors pushed back bets on a 25 bps Fed rate hike to September 2022 from July next year.

And while most euro zone bond yields were dragged lower, they moved off their lows after euro zone inflation data.

Consumer price growth in the 19 countries sharing the euro accelerated to 4.9% in November, by far the highest level in the 25 years since the figure has been compiled, up from 4.1% a month earlier and well ahead of expectations for 4.5%. read more

"It's quite likely that some of these higher inflation prints do feed through to second-round effects," Gareth Colesmith, head of global rates and macro research at Insight Investments told a markets forum on Tuesday, referring to rising inflation among major economies.

While some European Central Bank policymakers have warned that high inflation, even if temporary, could trigger a surge in wages, ECB President Christine Lagarde and chief economist Philip Lane have dismissed this argument, saying that wage growth remains anaemic.

The ECB is likely to keep buying bonds through 2022 to boost the bloc's economy and could even resume pandemic emergency bond buys after they end in March, ECB Vice President Luis de Guindos told French newspaper Les Echos. read more

Reporting by Dhara Ranasinghe; Editing by Ana Nicolaci da Costa, Ed Osmond and David Evans
Disclaimer: The views expressed in this article are those of the author and may not reflect those of Kitco Metals Inc. The author has made every effort to ensure accuracy of information provided; however, neither Kitco Metals Inc. nor the author can guarantee such accuracy. This article is strictly for informational purposes only. It is not a solicitation to make any exchange in commodities, securities or other financial instruments. Kitco Metals Inc. and the author of this article do not accept culpability for losses and/ or damages arising from the use of this publication.