Nov 30 (Reuters) - Bonds rallied to multi-week highs on Tuesday after the head of drugmaker Moderna raised concerns about the efficacy of vaccines against the Omicron coronavirus variant and the demand for safe assets put Treasuries on course to end the month firmer.

Yields fall when prices rise and the rally extends gains made since scientists announced the detection of the Omicron variant late last week.

U.S. money markets pushed back their expectation of a first, full 25 basis-point rate hike to September 2022, versus July last week.

Moderna's CEO told the Financial Times that present vaccines would likely be less effective against the new variant and that it would be a risk to completely shift production to an Omicron-targeted dose while other variants remained in circulation. read more

The market moves have 10-year Treasuries heading toward snapping three months of selling to post a monthly gain, with yields down 14 bps in November as investors reel back wagers on higher rates. 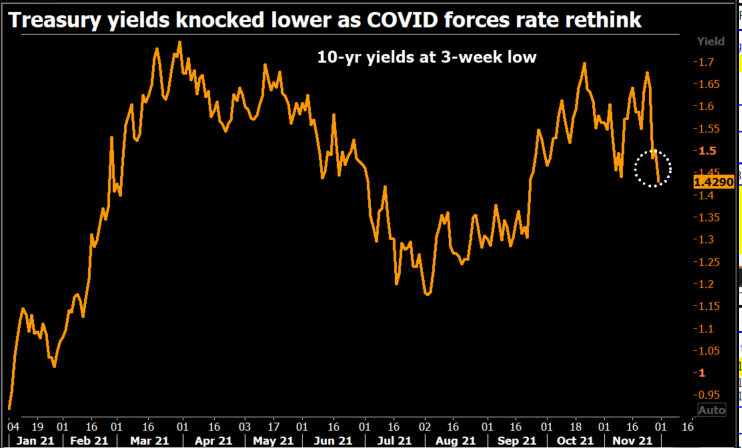 "The head of Moderna saying that the vaccines will be less good is what's driving the move," said Lyn Graham-Taylor, senior rates strategist at Rabobank in London. "More good news was priced into the States curve so that is coming off."

"There's virtually been a pricing out of a rate hike in the U.S. whereas there's not as much to price in the euro are," Graham-Taylor said.

Ahead on Tuesday, Federal Reserve Chair Jerome Powell and Treasury Secretary Janet Yellen are due to testify before U.S. lawmakers from 1500 GMT. read more

Reporting by Tom Westbrook, additional reporting by Dhara Ranasinghe and Yoruk Bahceli; Editing by Kim Coghill
Disclaimer: The views expressed in this article are those of the author and may not reflect those of Kitco Metals Inc. The author has made every effort to ensure accuracy of information provided; however, neither Kitco Metals Inc. nor the author can guarantee such accuracy. This article is strictly for informational purposes only. It is not a solicitation to make any exchange in commodities, securities or other financial instruments. Kitco Metals Inc. and the author of this article do not accept culpability for losses and/ or damages arising from the use of this publication.