Dec 2 (Reuters) - A build up of bets on rising interest rates has done nothing to derail a stock market rally based on conviction that policy tightening by the U.S. Federal Reserve and other central banks will go nowhere near as far as it did in the past.

A fresh bout of COVID-linked uncertainty has seen markets backtrack slightly on the hefty rate hikes priced in next year from the Fed, Bank of England and others. But Fed boss Jerome Powell's most recent comments indicate he is on track to raise rates several times in the next two years. read more

Stock markets have been mostly unfazed by rate rise talk - equity funds have seen inflows every week this year, save two. In a world where bonds, on an inflation-adjusted basis, yield far below 0%, there is simply no alternative, investors say.

And those negative "real" yields, alongside stubbornly low longer-dated government borrowing costs, flattening yield curves and soaring equities, all rely on the view that terminal rates - or where central bank policy rates will peak - will be lower than in previous cycles.

The previous Fed rate hike cycle peaked at 2.25%-2.5% in 2018. But the upcoming cycle will end below 2%, according to euro-dollar futures' view of U.S. rates in five years, a proxy for the terminal rate .

That bet, which is lower than the 2.5% the Fed itself projects, reflects the belief that policy tightening may end before interest rates hit the Fed's 2% inflation target. It implies "real" U.S. interest rates will remain negative.

It's a similar picture in the euro zone and Britain, where terminal rates are seen just above 0% and just below 1% respectively.

"Bond markets are saying ... we will hold long-end yields low because we think (rates) will rise, then come straight back down again."

But there is no margin for error.

A trillion dollars have poured into global stocks this year - more than the prior 19 years combined - taking share price valuations to ever new highs. Corporate bond risk premia are historically low, while cumulative household, corporate and sovereign debt rocketed $36 trillion during the pandemic. read more

For this reason, many reckon real U.S. yields - currently at minus 1% on the 10-year benchmark - will need to stay sub-zero for years, if not decades. And yields remain stubbornly low on long-dated bonds - 10-year Treasuries peaked just below 1.8% this year.

"What's been driving the longer part of the curve is an expectation that once central banks start raising rates they won't be able to get anywhere near levels they got to in prior hiking cycles," said Barnaby Martin, head of credit strategy at BofA.

Crucial to estimating the terminal rate is the natural or neutral rate, sometimes called r-star - the equilibrium level of rates where full employment co-exists with stable inflation.

This rate has been in steady decline across the developed world. Reasons range from ageing populations to high savings rates and the United States is no exception, with the inflation-adjusted r* falling to around 0.4% last year, from 2.5% in 2007. 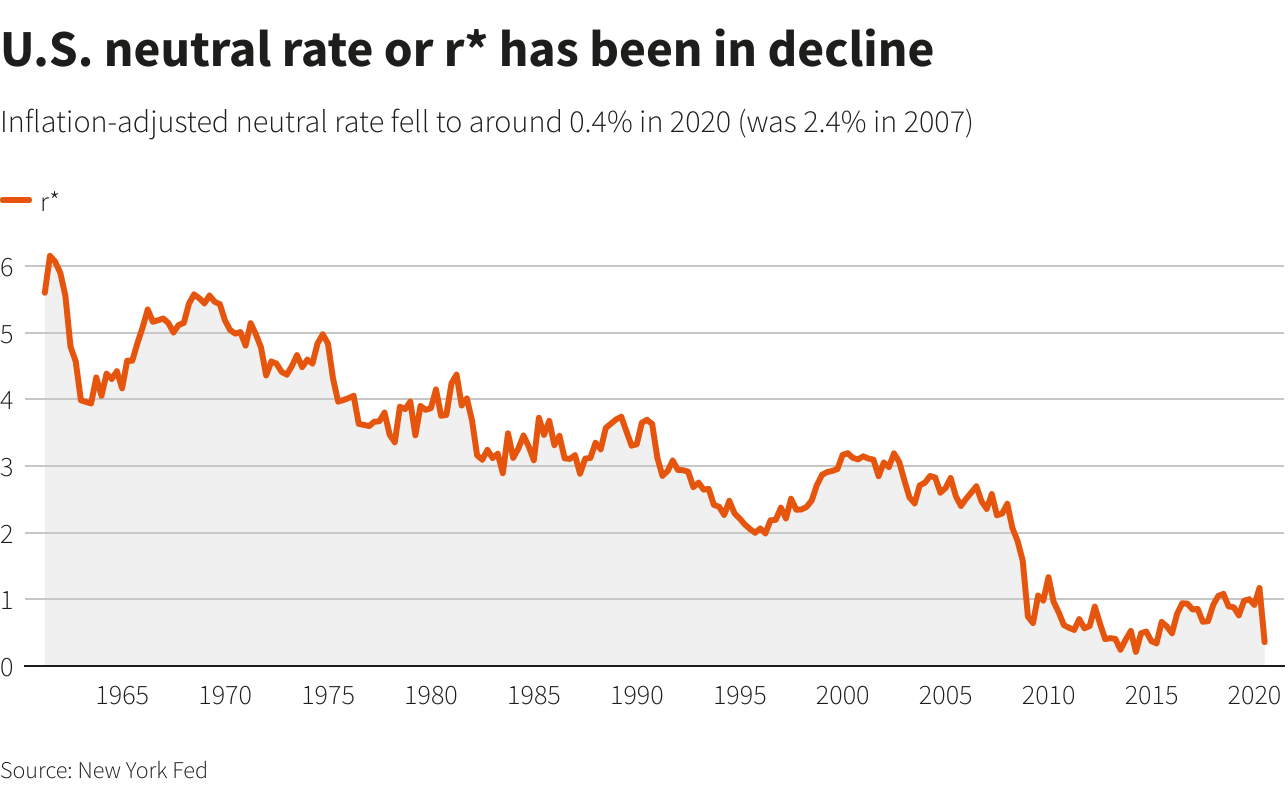 The risk is neutral rates turn out higher than markets project.

Long bond yields, suppressed by huge demand for safe securities, are a misleading indicator, some argue.

Second, early and aggressive rate hikes priced in relative to the Fed's own projections suggest investors are not buying the Fed's shift to flexible average inflation targeting (FAIT). With FAIT, the Fed aims for inflation to average 2% over time and will tolerate temporary overshoots.

"To the extent you can call the FAIT framework successful, you can also say the Fed has been successful in lifting the neutral rate higher than the last cycle," Dhingra said, predicting the terminal rate may end up above 2.5%.

Rates could be lifted too by greater corporate spending, better productivity and above all, labour market changes. Here, economists will watch the NAIRU rate - the lowest unemployment can go without boosting inflation.

The question is whether the pandemic will reverse a years-long NAIRU slide, if for instance workers gain more wage bargaining power. 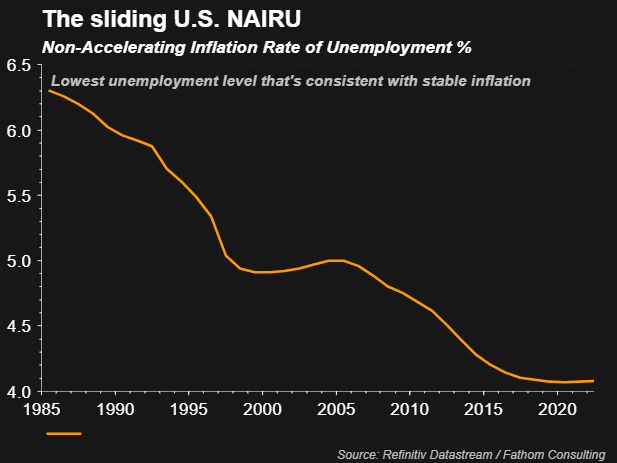 There is no sign yet of a wage spiral, although current labour shortages mean the market's terminal rate bets may face challenges.

And if shortages ease, that may increase the likelihood that the Fed sticks to the rate hike cycle it currently projects.

"For equities to sustain the current valuation they have, it's going to be a very tight rope they are walking." 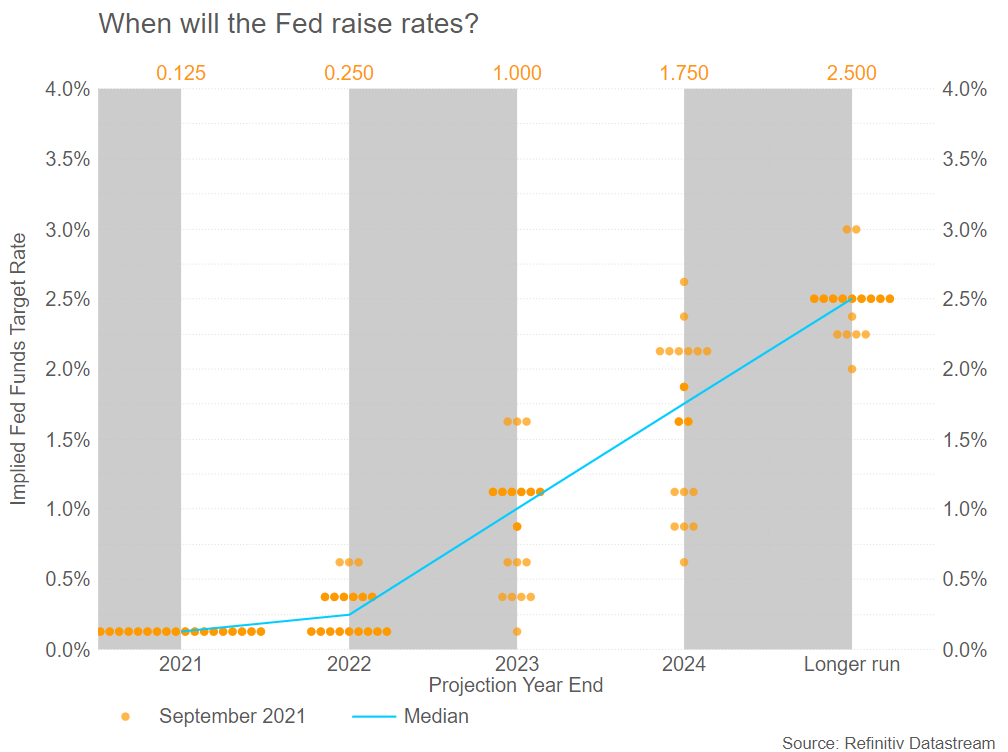 Fed dot plot
Reporting by Yoruk Bahceli Additional reporting by Sujata Rao Editing by Sujata Rao and Mark Potter
Disclaimer: The views expressed in this article are those of the author and may not reflect those of Kitco Metals Inc. The author has made every effort to ensure accuracy of information provided; however, neither Kitco Metals Inc. nor the author can guarantee such accuracy. This article is strictly for informational purposes only. It is not a solicitation to make any exchange in commodities, securities or other financial instruments. Kitco Metals Inc. and the author of this article do not accept culpability for losses and/ or damages arising from the use of this publication.