Dec 3 (Reuters) - Federal Reserve policymakers look likely to accelerate the winddown of their bond-buying program when they meet later this month as they respond to a tightening labor market and move to open the door to earlier rate hikes than they had projected.

U.S. employers added 210,000 jobs last month, a U.S. Labor Department report showed Friday, less than half of what economists had expected. But average hourly earnings over the past 12 months rose 4.8%, the unemployment rate dropped to 4.2%, and the workforce grew by the most in 13 months. Analysts said they believe the moderate job gains understate labor market strength and that they would likely be revised upward.

St. Louis Fed President James Bullard took the moment to intensify his call for faster action by the Fed's policy-setting panel, and said that rapidly strengthening economic data was making more of his colleagues comfortable with the idea of speeding up the bond-buying taper and laying the groundwork for a liftoff from zero rates. In September a slight majority of the Fed's 18 policymakers thought a rate hike would not be warranted until at least 2023.

"The danger now is that we get too much inflation... it's time for the (Fed) to react at upcoming meetings" Bullard said, arguing that the Fed should finish its bond program by March, and reiterating his view the central bank should raise rates at least twice next year.

"The inflation numbers are high enough that I think (ending the taper by March) would really help us to create the optionality to do more if we had to, if inflation doesn't dissipate as expected in the next couple of months," he told reporters. 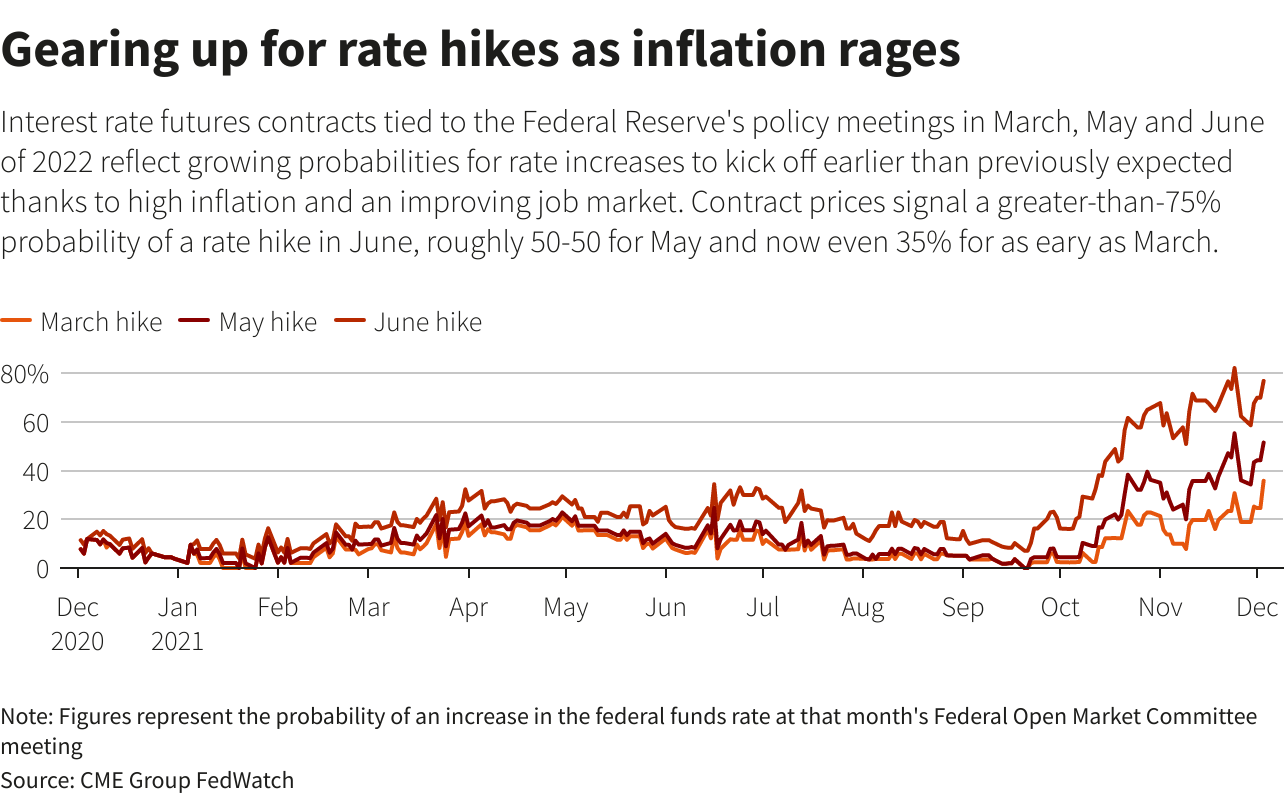 The Fed has kept interest rates near zero since March 2020. In November it began reducing its $120 billion in bond purchases each month on a pace that would end them entirely by June 2022.

But, with inflation running at more than twice the Fed's 2% target and risks rising that it won't recede next year as quickly as policymakers would like, Fed Chair Jerome Powell said this week that at the Fed's next policy meeting on Dec. 14-15 they would consider speeding up the taper by a few months. 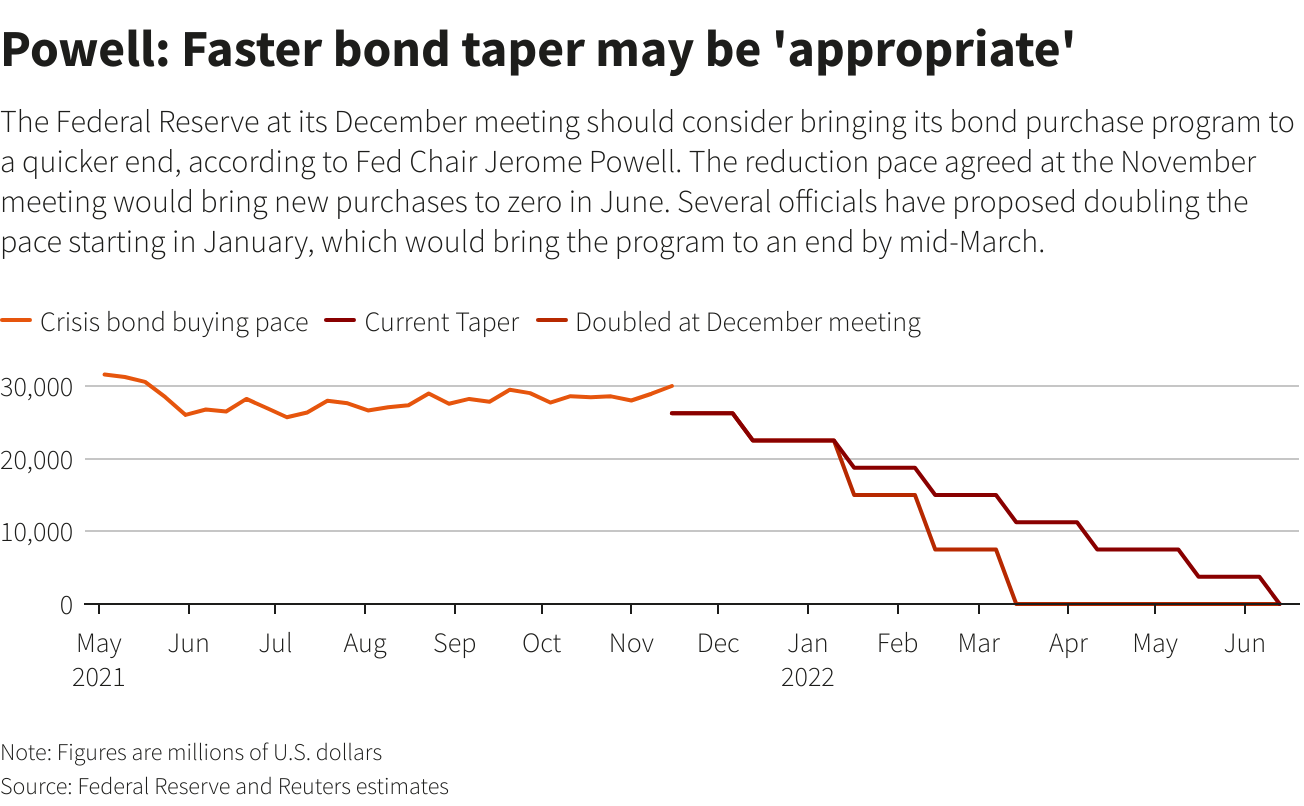 Bullard has for months been on the hawkish end of the Fed's policy spectrum, but in the last few weeks more of his colleagues have joined him in wanting at least the option of raising rates earlier than June.

Fed policymakers generally agree that a liftoff from near-zero rates should only start after the Fed has stopped buying bonds.

Friday's labor report showed labor force participation rose to 61.8%, the highest since it fell off a cliff in the early days of the pandemic, and women - many of whom stayed home from jobs to fill in childcare, schooling and eldercare gaps - entered the labor force at the fastest rate since March.

"We think the Fed will view the economy as near full employment," Barclays economists wrote in a note, adding that not only do they expect the central bank to speed up its taper in December, but also to begin raising rates in March.

Interest-rate futures traders are pricing in a rate increase in June, with two more by the end of 2022.

Economists at Goldman Sachs noted following the report that the survey response rate that feeds into the payrolls number was the lowest for a November in 13 years. Several months this year have seen upward revisions in later readings, owing in part to the difficulty of data collection during the pandemic. From May through September, 748,000 more jobs were created than reported in the Labor Department's initial estimate.

Bullard echoed that in comments to reporters, adding he expected upward revisions to the payrolls number.

He downplayed the potential impact of the Omicron COVID-19 variant, saying the economy had adjusted to prior strains of the virus and he'd expect a similar pattern this time,

Still, some analysts noted, even if the Fed wraps up its quantitative easing program within months, that doesn't necessarily mean a string of rate hikes is a given.

"We think that it is clear that QE has overstayed its welcome," Blackrock chief investment officer Rick Rieder wrote in a note to investors, but added, "the next few months will be fertile with information on Omicron risks, supply and demand influences, a potentially moderately slowing demand for goods and services, having moved further from the immense fiscal and monetary stimulus, and the potential alleviation of some of the supply-chain pressures that have pressed prices higher."

Reporting by Ann Saphir, Sinead Carew, Lucia Mutikani and Lindsay Dunsmuir; Editing by Chizu Nomiyama and Andrea Ricci
Disclaimer: The views expressed in this article are those of the author and may not reflect those of Kitco Metals Inc. The author has made every effort to ensure accuracy of information provided; however, neither Kitco Metals Inc. nor the author can guarantee such accuracy. This article is strictly for informational purposes only. It is not a solicitation to make any exchange in commodities, securities or other financial instruments. Kitco Metals Inc. and the author of this article do not accept culpability for losses and/ or damages arising from the use of this publication.