Gold is stuck between these two forces, prices to climb towards $1,900 in Q1 2022 – Standard Chartered 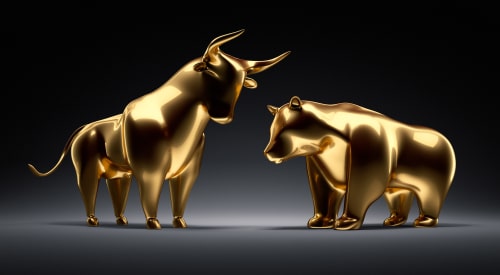 (Kitco News) The gold market is caught between two opposing forces, which are keeping the precious metal's trading range mostly between $1,750 and $1,850 an ounce, said Standard Chartered.

"Gold has been caught between moderating Fed rate-hike expectations (triggered by Omicron news) and safe-haven demand amid stagflation risks on the one hand; and a softer physical market (on fading seasonal demand) and fears of accelerated rate hikes on the other," Cooper said on Monday.

As the equity market remains volatile, gold has shifted from trading in an inverse relationship with the U.S. dollar to following the inflation narrative and the real yields more closely, the precious metals analyst pointed out.

"Gold has shifted lately to tracking real yields more closely than the USD. While this should provide greater upside risk to gold over the medium term, conviction is low in the near term," she said.

First, investors saw gold build up some bullish momentum following a dovish Fed meeting in November. However, that positive trend faded after Fed Chair Powell got renominated and spoke of a more aggressive tapering schedule to be discussed at the upcoming December meeting.

Also weighing on gold in the short-term is tactical positioning, Cooper explained. "Gold prices had come under pressure before the Omicron variant emerged, and investors had started to liquidate toppy long positions," she said.

On the physical side, demand could decline a bit in December after witnessing a recovery in the fall. However, China's Lunar New Year demand will serve as a boost in the winter.

"Gold's November rally was also accompanied by seasonal demand, offering a strong floor for prices to rally from. In December, however, that demand will start to wane. The latest trade data from India, China, Hong Kong and Switzerland underscores the strength of the physical market in October, and preliminary data suggests that India's demand remained strong in November. But India's local premium has softened in early December (despite easing prices), while China's premium has firmed," Cooper noted. "The Lunar New Year falls on 1 February 2022, and China's demand typically picks up six weeks ahead of the new year during strong consumption years; this suggests a soft floor in early December."

Standard Chartered sees gold wrapping up the year at around the $1,825 an ounce level and then rising to $1,875 an ounce in the first quarter of next year.