Britain brought in new rules last week to make it more attractive for technology companies to list, tearing up the strict "one share, one vote" regulation and enabling founders to complete a premium listing - which gives access to the prestigious FTSE indices - while retaining significant control. L8N2SN25Q.

Finance minister Rishi Sunak pledged earlier this year that the new rules would make London more competitive after Britain left the European Union and a number of companies floated on London's market in anticipation of a smoother listing process.

In the first eight months of this year 38 companies listed on London's main exchange to raise $16.87 billion, the highest since 2015, Refinitiv data shows.

However, some high-profile initial public offerings (IPOs) such as Deliveroo (ROO.L) and last year's debut from THG (THG.L) are trading well below their listing prices, as some investors steer clear of companies in which the founders have outsized voting rights.

These companies used a so-called "standard" listing, which for now precludes access to the FTSE indices, rather than a premium listing. 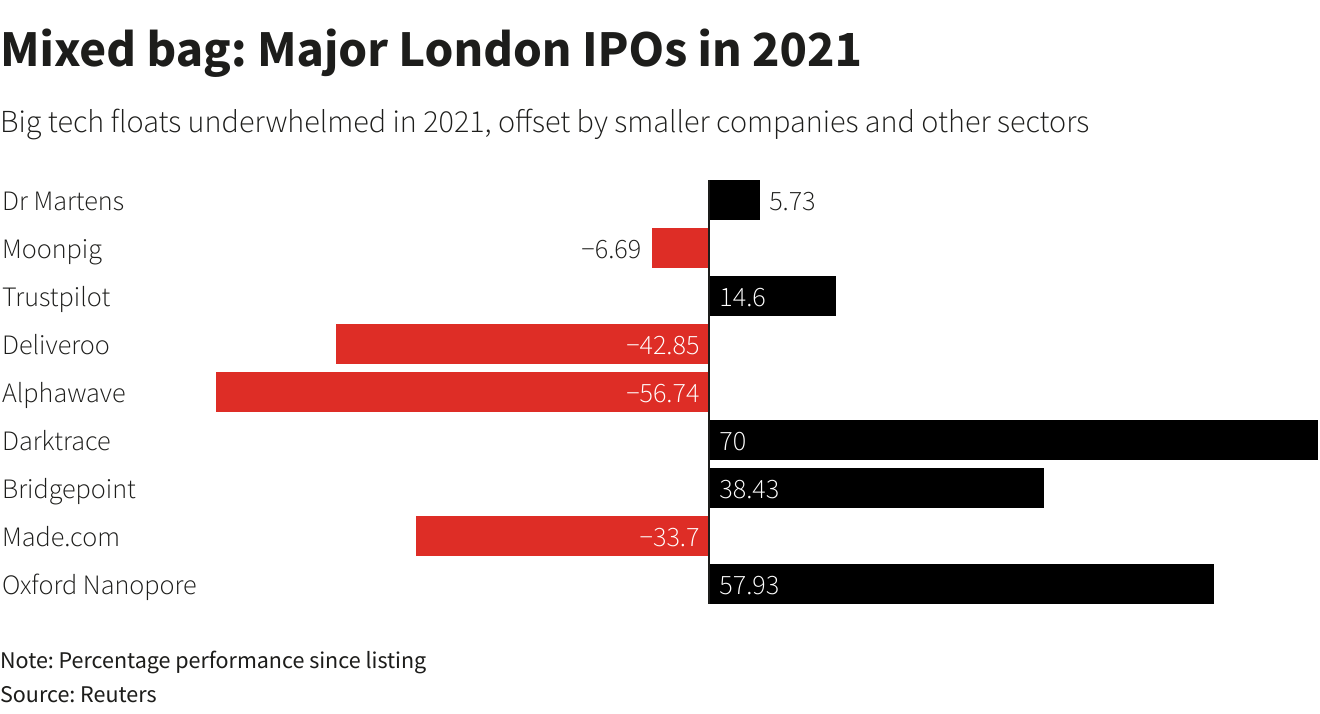 For an interactive version of this chart, click here: https://tmsnrt.rs/3DlOE03

"Broadly investors are keen for the UK market to be vibrant and to prosper, and since the global financial crisis we have had a lacklustre IPO market and that has changed this year," said James Ayre, co-head of investments at CCLA Investment Management.

"But I think one has to read the tea leaves - investors also care a lot about governance and ESG (environment, social and governance), and some of the IPOs we have seen this year have sparked some concern in those areas."

Ayre cited THG (THG.L) and Deliveroo (ROO.L), the meal delivery company, as examples of listings where unequal voting rights enjoyed by their founders put off some investors.

Shares in THG have fallen 65% since listing in 2020. Meanwhile Deliveroo - championed by Sunak at the time of its IPO as "a true British success story" - is down 35% from where it listed. Chipmaker Alphawave is down 52.4%.

Some other big listings - without dual-class shares - are also lower, with online card retailer Moonpig (MOONM.L) down 5% and Made.com (MADE.L) 21%.

In the case of THG, Deliveroo and Alphawave, corporate governance concerns weighed on the stocks, with THG founder Matthew Moulding giving up his golden share in a bid to placate investors after the company's plans to split its THG Ingenuity division came under scrutiny. read more

Deliveroo fell on its market debut in the face of worries around the dual-class share structure and a perceived lack of protection for its workers and has struggled to recover ever since. On Monday it fell 6% on reports the EU will reclassify workers of such apps as employees. read more

Alphawave fell on its market debut and then crashed again after a media report raised fears about related party transactions.

Analysts say some IPOs also fell as several of them were e-commerce companies that based their valuations on pandemic-era demand, which fell as Britain came out of lockdown in 2021.

A lack of liquidity is another frequently cited obstacle, with some saying that the London main market does not generate the mass appeal of Nasdaq or New York Stock Exchange IPOs.

Average monthly turnover for U.S. stocks was about $560 billion so far this year. That compares with $78 billion on average in European stocks and $16 billion monthly for British stocks, according to data from Rosenblatt securities.

While European and UK numbers have improved, U.S. numbers are rising more steeply. 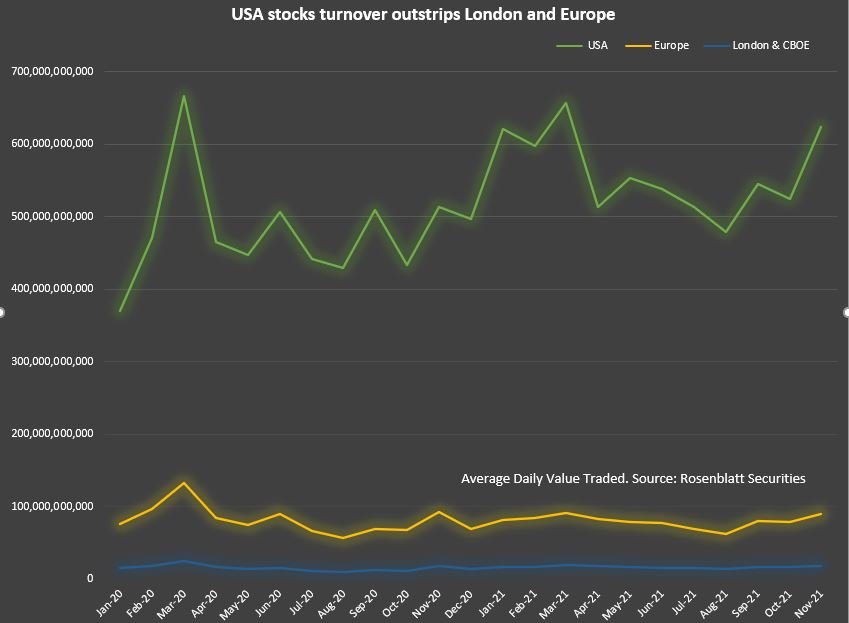 "Pension funds are still investing (in London) but from the retail investor there is less appeal to invest in the stock market, which is affecting the liquidity of shares," said Howard Womersley Smith, a fintech and data lawyer at Reed Smith

While London main market IPOs have hit their highest levels since 2015 at $16.88 billion, Amsterdam and Stockholm are slowly increasing their share, with $9.1 billion and $8.98 billion of IPO volumes, according to Refinitiv data. 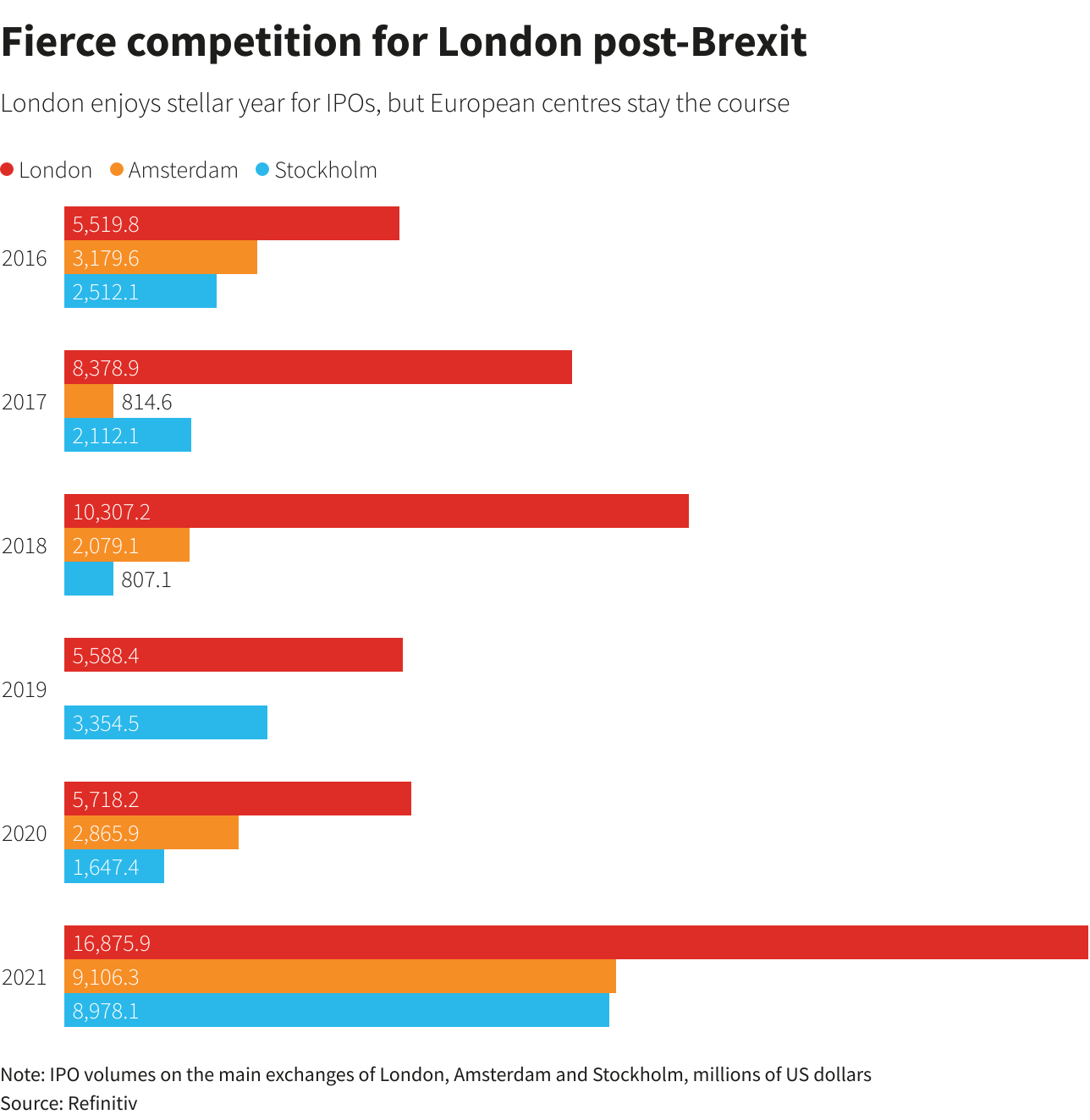 For an interactive version of this chart, click here: https://tmsnrt.rs/3rvotSj

UK shares' relative underperformance has caught the eye of cash-rich private equity funds, who have spent $36.9 billion taking British-listed companies such as W Morrisons and TalkTalk private in 2021 so far, according to Dealogic.

Meanwhile, Ryanair (RYA.I) and BHP Billiton (BHPB.L) have announced their intention to delist from the LSE. read more ,

All of this adds to the need to attract new companies, but bankers and analysts believe that easier regulations have attracted companies that were looking to ride a trend that will not last.

One senior equity capital markets banker said that the performance this year will inevitably hurt the market for IPOs in 2022 and beyond, saying that investors will be even more sceptical when they return in the new year.

"It won't happen overnight, but the risk is that we gradually lose companies to New York, where investors are more tolerant of companies that haven't turned a profit yet. Or even worse - to Amsterdam," he said.

Reporting by Abhinav Ramnarayan, Additional reporting by Saikat Chatterjee; Editing by Louise Heavens
Disclaimer: The views expressed in this article are those of the author and may not reflect those of Kitco Metals Inc. The author has made every effort to ensure accuracy of information provided; however, neither Kitco Metals Inc. nor the author can guarantee such accuracy. This article is strictly for informational purposes only. It is not a solicitation to make any exchange in commodities, securities or other financial instruments. Kitco Metals Inc. and the author of this article do not accept culpability for losses and/ or damages arising from the use of this publication.