Gold has been 'shockingly stable': It's a long-term play as U.S. dollar rolls over, says Jeffrey Gundlach 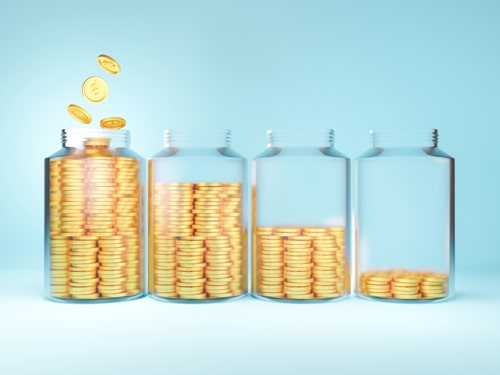 (Kitco News) Billionaire "Bond King" Jeffrey Gundlach sees inflation not returning below the 4% handle next year, and bond markets are already "sniffing out a weaker economy" coming. For gold, this means a long-term hold after a "shockingly stable" and "boring" year.

There are "rough waters" ahead for the financial markets in 2022 as the Federal Reserve looks to accelerate its tapering schedule and raise rates next year, said DoubleLine CEO Jeffrey Gundlach.

"Powell is going to double that pace of taper, which would get us out in March. It's quite likely that since the stock market and risk assets have been clearly supported for over a decade by balance sheet expansion, it is turning into rough waters," Gundlach said during the DoubleLine Total Return Webcast.

A hawkish Fed will drag the economy down. And as the central bank proceeds to raise rates in 2022, economic problems will follow, Gundlach pointed out.

"It's likely that we will see economic problems with just a few rate hikes from the Fed — four rate hikes or so. It's 1% or 1.5% on the Fed funds rate that breaks the economy," he said.

The bond market is already signaling red flags. "Since March of this year, the bond market seems to be sniffing out a weaker economy coming … One should expect economic problems sooner rather than later. My base case is we'll start to see trouble by the second half of 2022," Gundlach noted.

The trigger behind a more hawkish Fed is inflation, which is not going anyway next year. Gundlach warned that the U.S. inflation pace may not decelerate below 4% on an annual basis for the whole of 2022.
"Inflation on autos may go away, the inflation on lumber may dissipate, inflation on some of the supply-chain bottlenecks may dissipate, but wage growth and shelter may replace it and keep. Looking out to the end of 2022, it's very possible that we don't see a reading that has a handle below 4% at any time in 2022.

Gundlach also projected that inflation could rise to 7% on an annual basis in the next couple of months.

When asked about gold, Gundlach said it has been "boring" and "shockingly stable" in light of the commodity inflation and the wild ride going on in bitcoin this year. "Gold and silver are kind of the orphans in the commodity market. They have not gone up at all," he said.

For gold to rally, the U.S. dollar needs to roll over. "The dollar has been a cap on gold. I do think that when the dollar heads down, gold will go up."

Gundlach continues to hold gold as a long-term play, adding that the last time he bought the precious metal was in September 2018 at around $1,180 an ounce level.

"But it certainly has not been rewarding at all this year compared to the other things from commodities," Gundlach commented.

Gundlach's long-term dollar view is "strongly bearish," with expectations of a weaker USD in the second half of 2022 or 2023 due to twin deficits in the U.S.

DoubleLine CEO also projected that the Fed would step in to defend risk assets through money printing.

"The Fed will step in if the equity market declines by say 20% or more. Money printing and money giveaways are with us to stay. And, I predicted this years ago that we would send money to people and do it more broadly and at greater amounts," Gundlach stated.