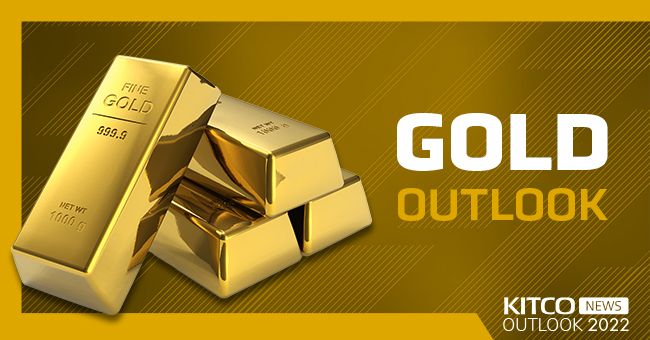 (Kitco News) - Many gold investors will be happy to put 2021 in their rearview mirrors as the precious metal has lagged what has been a red hot commodity market for most of the year.

Despite a positive price environment of historically negative real interest rates, the gold market has suffered from lackluster demand as investors focused on the Federal Reserve tightening interest rates, which started with a reduction in its monthly bond purchases in November.

There are growing expectations that the Federal Reserve will speed up its tapering process and raise interest rates before the second half of next year. Currently, markets are pricing in a rate hike in June and see the potential for four rate hikes next year.

While this sentiment has weighed on gold through most of 2021, some analysts have said that the tide could start to turn in the new year as U.S. monetary policy is too aggressive.

Kristina Hooper, chief investment officer at Invesco, said that she expects that once the Federal Reserve starts to raise interest rates, the focus will turn to just how high those rates can go.

"The 10-year yield will probably go up next year, but we don't see a dramatic rise," she said. "The Terminal rate is still going to be pretty low."

Hooper said that she expects the gold market to remain relatively flat next year, with prices continuing to hover around $1,800 an ounce.

She said gold remains an attractive inflation hedge and safe-haven asset in a world faced with growing geopolitical uncertainty. However, she added that U.S. economic growth supports risk assets even if momentum slows next year.

Ole Hansen, head of commodity strategy at Saxo Bank, said he is a little more optimistic on gold in 2022.

"There is enough uncertainty that gold should find a new top sometime in 2022," he said.

Although many investors have been disappointed in gold's performance this year, Hansen said that the market has held up relatively well. Gold prices are currently testing support just below $1,800 an ounce and the market is down 6% this year. However, Hansen added that the current price action appears to be some consolidation from the nearly 25% gains seen in 2020.

He added that the most significant factor driving gold is the growing inflation threat. He said that while Federal Reserve interest rate hikes will push bond yields higher, real interest rates will remain negative.

Most economists expect no matter how many times the Federal Reserve raises interest rates next year, they are not likely to get in front of the inflation curve.

"If the Fed tried to get in front of the curve, it would create a new recession," said Ole. "Next year, we could see a sharply inverted yield curve where short-term rates rise faster than the long tend and that means real rates will remain low and that is a good environment for gold."

It's not all about inflation

Interest rates and real bond yields will be critical factors driving precious metals prices next year; they are not the only thing market analysts are watching.

John LaForge, head of real asset strategy for Wells Fargo said that he sees the entire commodity sector in the middle of a long-term bull market. He added that most prices have rallied because of significant supply and demand imbalances.

LaForge explained that under-investment in the mining sector has created a dearth of supply, just as demand is increasing.

"The commodity rally comes down to the lack of supply growth and that is not easy to fix," he said during the bank's 2022 outlook presentation. "Regardless of where interest rates will be next year, growing supply deficits will drive commodity prices higher."

LaForge said that he is bullish on gold next year as the precious metal catches up to the rest of the commodity complex.

LaForge did note that gold will be sensitive to U.S. monetary policy in 2022; however, he added that it is unlikely the Federal Reserve will adopt overly aggressive monetary policies.

The Wells Fargo bond market team noted that President Joe Biden will have three vacancies to fill on the Fed next year.

"It is unlikely that Biden will appoint hawkish central bankers to the board next year, so we think there will be a dovish tilt to monetary policy next year," said Darrell Cronk, chief investment officer of Wells Fargo in the bank's 2022 outlook webinar.

However, not all analysts are optimistic about gold for 2022. Commodity analysts at Capital Economics see gold prices falling to $1,600 by the end of next year.