(Kitco News) - Codelco was the largest copper mining company in the world in Q3 2021 (based on attributable copper tonnes). Top 10 copper miners produced 2,291 thousand tonnes of copper in Q3 2021, 2% less than a year before.

Kitco ranked the top 10 largest copper mining companies worldwide based on their reported attributable copper production in Q3 2021.
Production at the Chilean mining giant Codelco, the world’s largest copper mining company, fell 7.2% year-on-year to 415 thousand tonnes (including Codelco’s stake in El Abra and Anglo American Sur) in Q3 2021. Codelco noted that its Q3 production was impacted by the workers' strike at its Andina Division. However, the company said it had reached a 36-month labor deal with two unions at the mine in early September.

Freeport-McMoRan is second as the company’s attributable copper production amounted to 363 thousand tonnes in Q3 2021, which is 17% more than a year ago, primarily due to the ramp-up of underground production at the Grasberg minerals district in Indonesia. The company said it has successfully transitioned Grasberg to be the world’s largest underground block-caving operation while maintaining excellent performance throughout its global operations.

BHP Billiton is fourth with 249 thousand tonnes of copper (attributable) mined in Q3 2021, an 8% decline compared to Q3 2020. The company reported lower volumes at Olympic Dam due to the commencement of the planned smelter maintenance campaign, whereas Escondida copper production decreased due to forecast concentrator feed grade decline.

Southern Copper is fifth. In Q3 2021, the company’s mine copper production was slightly (1%) lower than in Q3 2020 at 245 thousand tonnes. The company said that higher production at its Cuajone unit (+10%) was offset by lower levels at other open pit operations due to variations in ore grade and recoveries.

First Quantum sits sixth. The company’s copper production for the quarter was 210 thousand tonnes, in line with the same period in 2020. 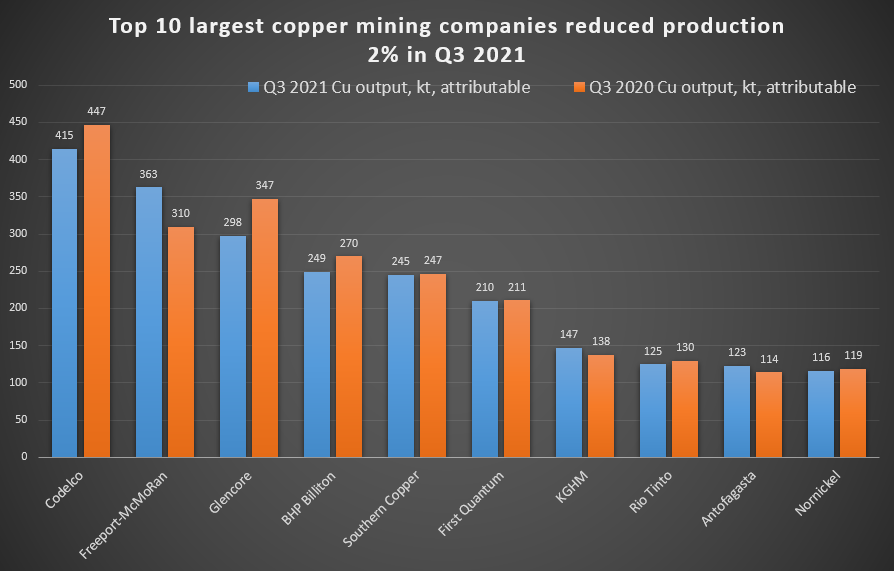