Silver price 2022: Here's how silver can outperform gold as it plays catch-up next year 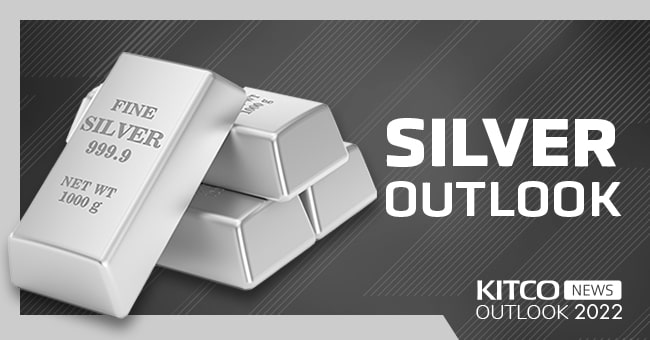 (Kitco News) There have been many questions surrounding gold and silver's performance in 2021. But analysts remain optimistic, stating that silver can outperform gold once the bull market kicks off in 2022.

Both silver and gold had an uneventful year – silver last trading down 13.5% year-to-date and gold down 4.8%.

"Silver had no life of its own this year, fluctuating merely in gold's slipstream. On balance, it suffered disproportionately high losses as compared with gold. As a result, the gold/silver ratio has climbed from a good 70 at the beginning of the year to over 80 now," said Commerzbank analyst Daniel Briesemann.

For next year, analysts are not discouraged, noting that the bearish sentiment around precious metals is on the cusp of shifting, with the technical charts looking healthy and silver trading cheaply relative to gold.

"Silver is a hybrid. It's a precious metal with a role as an inflation hedge, but it's also an industrial metal that has a lot of different applications," said Ned Davis Research (NDR) chief global investment strategist Tim Hayes. "We'll see that maintained. Silver made a multi-year low in 2020. And as much as it's been weak recently, it's still above the 2014 and 2019 lows, and it's making higher lows."

It is not unusual for silver to get dragged around by gold, said Perth Mint manager of listed products and investment research Jordan Eliseo.

"Silver prices collapsed in Q1 2020. We saw effectively a once-in-a-century event where the gold-silver ratio went to over 110. Since then, silver has roared in the last nine months of 2020. It was natural that if gold was going to pull back, silver was going to have a breather and a bit of a correction as well," Eliseo described.

Following a correction in 2021, the technical outlook looks promising for silver as investors see it as a bargain buy relative to gold.

"The gold-silver ratio now is a lot healthier. It's basically at 80:1. It's nowhere near the extreme that we saw in March 2020. Anytime the ratio has been 80:1, silver began to look relatively cheap," Eliseo said. "If you go all the way back to the middle of the 1970s, there's only been a couple of times where silver has been cheaper relative to gold than the roughly 80:1 ratio."

Watch these key macro drivers for 2022

It will be up to several drivers to trigger a rally in 2022, and silver is paying close attention to the inflation-hedge narrative and the industrial outlook.

Analysts said investors would need to see a reversal of some of the main headwinds holding gold and silver back this year, including the U.S. dollar, real yields, strong economic growth, and the idea that inflation is transitory.

Many thought 2021 would have been the year of silver and gold because of the hot inflation fears. Price pressures reached the highest level since 1982 in the U.S. in November, with the annual CPI rising to 6.8%. But the picture is a lot more complicated, with the inflation driver likely to kick in only next year.

"We've seen more money pour into equity strategies this year than pretty much the last 20 years combined. That's held gold and silver back. The U.S. dollar index is up around 8% this year, and that is a natural headwind. Real yields also rose this year, economic growth beat expectations, and the market was convinced that inflation was transitory only until two months ago," said Eliseo.

Even now, the market is expecting inflation to return closer to 3% within the next five years. "The market is currently pricing a fairly aggressive Fed taper, three rate hikes in 2022, and inflation closer to 2.5% rather than 6.5% in five years from now," Eliseo explained.

But gold has a history of performing well once the Fed commences a rate hike cycle. And silver follows gold. "It wouldn't surprise me to see if gold bottomed and started to move higher once the Fed completes its taper faster-than-expected and moves to raise rates," Eliseo noted.

Also, given how equity markets are priced, the next decade might not be as lucrative for the traditional 60/40 portfolio allocation. "It's almost inconceivable that those strategies will continue to return what they have over the last ten years. Even investment managers that run strategies like that are out there telling their clients that the next decade is probably not going to be so rewarding for mainstream financial assets," Eliseo added.

After a year of underperformance, investors could turn their attention back to silver next year.

"There's certainly that catch-up story built in there. It has underperformed gold to date. And you'll find some switching by investors into the silver market as a consequence of that," said ANZ senior commodity strategist Daniel Hynes.

The gold-silver ratio also points to silver's potential outperformance, noted Eliseo. "The very fact that the gold-silver ratio is at roughly 80:1, that alone suggests that if gold is going to rise, silver at the very least is going to come along for the ride and could quite likely outperform gold," he said. "Silver also benefits if commodities as a whole do well. If economies perform relatively strongly, it should benefit from an industrial perspective and the whole ESG transition that's taking place in the economy."

"To put that into perspective, the average in the modern era has been between 40:1 and 50:1. In simple terms, historically, silver is extremely underpriced compared to gold. At some point, you should expect that gap to close," Schiff wrote. "With that spread widening again, we could be setting up for another big rally in silver."

Silver's price action suffered in 2021 partly because of supply bottlenecks and significantly increased energy costs. But the industrial component in silver will also contribute to the precious metal's rally next year as some of the supply-chain issues get resolved.

"The industrial component of the silver market will tend to benefit more against a macro backdrop, which is still resulting in above-trend growth on a global basis. Even though that's easing back from some of the growth rates we saw this year, but certainly, it's still a positive economic story," said Hynes. "Silver can hold up relatively well off the back of the industrial component as opposed to gold over the next 12 months."

Demand consumption from the renewable sector will start to pick up as well. "The whole story around decarbonization will accelerate after COP26, and we'll start to see that benefit playout for the silver market," Hynes added.

The Silver Institute is projecting a supply deficit for the silver market in 2022, citing more industrial demand and global decarbonization efforts.

"This is attributable to strong industrial demand, which is benefiting from structural factors in addition to the continued post-corona recovery. These include the electrification of the vehicle fleet, 5G (mobile phone) technology and the commitment of governments to invest in 'green' infrastructure," commented Commerzbank analyst Carsten Fritsch. "Significantly more silver is used in electric vehicles than in cars with internal combustion engines."

The shift towards more solar energy is another critical driver that could take silver prices higher, according to BofA commodity strategists.

"The silver market has rebalanced on production discipline and demand from new applications including solar panels," the BofA strategists said. "Increased investment into solar panels should boost silver. Using the IEA's Net Zero scenario, silver demand from PV could hit 8550 tons by 2030, compared to 2,900 tons in 2020. As such, we remain constructive."

Analysts' price forecasts for next year vary between $24 an ounce and above $30 an ounce, depending on the outlook.

Commerzbank analyst Carsten Fritsch sees silver reaching $26 an ounce in 2022. "The silver price should benefit from this positive demand outlook and rise to USD 26 per troy ounce next year. Silver would thus also make up some ground against gold. This is not unusual, as silver normally follows gold's price movements disproportionately. This year it happened downwards; next year, it should happen upwards," Fritsch said.

ANZ's Hynes is more bullish on silver than gold but still sees the precious metal ending the year at just $22 an ounce after peaking at $24 mid-2022.

Hynes said that silver should be viewed as an inflation hedge next year but added many traders don't see it that way. "Its industrial uses in the electronic sector are relatively closely linked to some of the drivers of inflation that we're seeing at the moment. It has a place in an inflation-protected portfolio, but I don't think investors generally view it that way, but it deserves to have a spot in that," he noted.

"I do think that silver should be accumulated by everyone. And I'm convinced that in this bull market, there's going to be another corner attempted at the silver market," he said. "It's hard to believe that in January 1980 on a very brief basis, the gold-silver ratio was 17:1. I wouldn't be surprised if we see that ratio again at some point in this bull market."

Longer-term, Goehring does not rule out silver climbing to over $500 in this decade. "Silver plays massive catch-up rally to gold. And if gold gets to $10,000 in this decade and the gold-silver ratio gets down to 20:1. That's $500 silver," he said. "It will be the decade of shortages, and everyone's going to get poorer except for the people that own physical gold and silver."