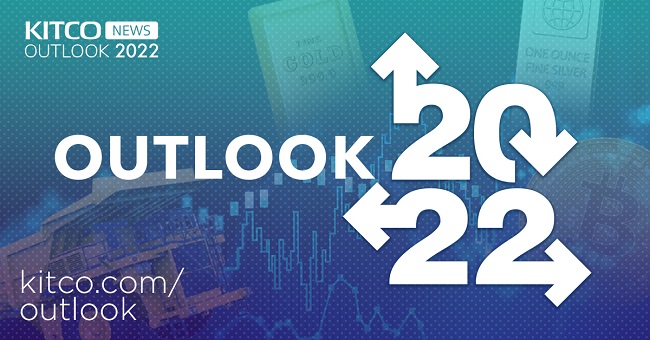 (Kitco News) - After a disappointing year, gold prices are ringing in 2022 on a solid note, trading at a five-week high. According to one precious metals analyst, gold should be on pace to resume its long-term bullish uptrend in the new year.

In a telephone interview with Kitco News, George Milling-Stanley, chief gold strategist at State Street Global Advisors, said that his base case scenario, with a 50% probability, is for gold prices to trade between $1,800 and $2,000 an ounce in 2022. He added that he sees a 30% chance of gold prices pushing above $2,000 to a new record high.

“We see an 80% chance of gold prices staying in the current range to moving higher next year,” he said. “Even with the Federal Reserve looking to tighten interest rates next year, we think gold has a pretty good chance of moving higher.”

“Investors should look beyond nominal policy rates and examine other factors such as real interest rates and/or the gold market’s supply and demand dynamics that may impact gold price movement,” Milling-Stanley said in his 2022 outlook forecast.

Milling-Stanley added that investors also need to put the Federal Reserve’s monetary policy stance in a much larger perspective within financial markets. With inflation expected to remain elevated through 2022, real interest rates will remain in negative territory.

Milling-Stanley said that it is unlikely Federal Reserve Chair Jerome Powell will take an overly aggressive stance on monetary policy to combat inflation. He added that he forecasts that the Federal Reserve will only raises interest rates twice next year, an estimate below current market predictions.

Looking past interest rates and U.S. monetary policy, Milling-Stanley said that gold will also remain an attractive safe-haven asset in 2022 as investors look to hedge their risky bets.

One reason investors shunned gold through 2021 is due to the unprecedented bullish fun in equity markets. The S&P 500 is looking to the year at record highs, up 27% for the year.

Although real interest rates are expected to remain low, Milling-Stanley said that inflation could weigh on elevated equity market valuations.

“Given the strong rally in financial markets in 2021, the potential for a cyclical correction, valuation-driven mean reversion, increased market volatility, or an exogenous tail risk has increased in 2022,” Milling-Stanley said in his outlook forecast. “This potential for higher volatility may push investors to gold as a potential hedge against heightened market risks. Historically, gold has served investors well against short-term volatility shocks.”

Milling-Stanley said that one final factor that should help support gold in the new year is a potential recovery in emerging markets.

“In China and India — two of the key emerging economies for the gold market — signs point to further consumer recovery throughout 2022,” he said.