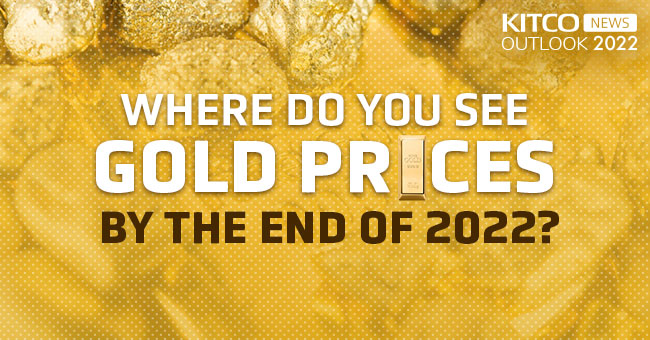 (Kitco News) - Retail investors remain significantly bullish on gold prices next year as the precious metal looks to end 2021 with nearly a 4% loss.

It has been a relatively disappointing year for the gold market, which saw some pretty volatile moves. Including a flash crash in August that saw the price drop below $1,700 an ounce. Gold prices have struggled to attract bullish attention even as real interest rates fell to historic negative territory, driven by extraordinary inflation pressure.

Analysts note that the rise in consumer prices this past year has been met with expectations that the Federal Reserve will tighten interest rates soon than expected. At its December monetary policy meeting, the U.S. central bank signaled that it would end its monthly bond purchase by March and could raise interest rate three times in 2022.

However, U.S. monetary policy is not scaring many retail investors who appear to be significantly bullish on gold heading into the new year. According to Kitco News' annual outlook survey, a clear majority of Main Street investors expect gold prices to push new record highs in 2022.

The results show that only 352 retail investors or 12% see gold prices holding relatively steady in the current range between $1,800 and $1,900 an ounce.

There have been a few bearish calls that have stood out in recent weeks. Analysts at J.P.Morgan Research said that gold prices could average around $1,520 by the fourth quarter of 2022.

Meanwhile, Georgette Boele, senior FX & precious metals strategist for the Dutch bank, said that she sees gold prices falling to $1,500 an ounce by the end of next year.

Wall Street analysts have no clear consensus regarding where gold prices will go next year. Many analysts have said that while the specter of rate hikes next year could weigh on gold prices, much of the bad news has been priced in.

Many banks see gold prices trading in a reasonably wide range between $1,800 and $2,000. The most significant factor to drive gold price in 2022 remains real interest rates. Although the Federal Reserve is looking to raise interest rates three times next year, many economists expect inflation to stay above 4%, which means real rates will remain deep in negative territory. Almost all economists predict that the Federal Reserve will remain well behind the inflation curve in 2022.

Among the bullish banks, Goldman Sachs is one of the most optimistic. In November, analysts said they see prices pushing above $2,000 an ounce by the end of the year.

Wells Fargo is also bullish on gold next year, looking for $2,000 an ounce as the precious metal plays catch up to the rest of the commodity complex. John LaForge, head of real asset strategy for Wells Fargo gold, will be sensitive to U.S. monetary policy in 2022; however, he added that it is unlikely the Federal Reserve will adopt overly aggressive monetary policies.