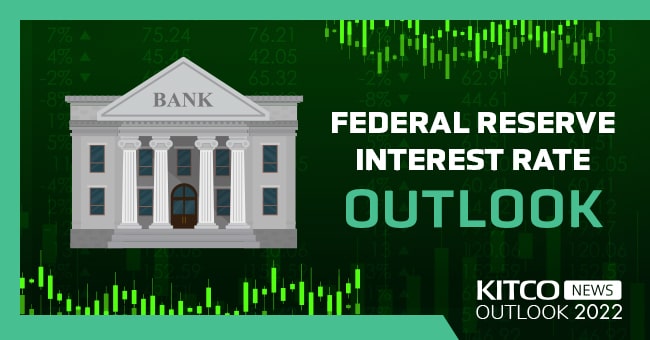 (Kitco News) The Federal Reserve's monetary policy will be key in guiding gold's price action in 2022, especially after the hawkish shift at the end of the year. This leads to a key question — can gold handle a more aggressive central bank after an already lackluster year?

At the December meeting, the Fed announced that it would be doubling its tapering pace to $30 billion a month, which would conclude the Fed's asset-purchasing program in early 2022. The central bank cited problematic inflation and a strong economic recovery as the main reasons for the shift in policy.

When the Fed announced its accelerated schedule, gold ended up making unexpected gains as most of the information was already largely priced in.

It is "really appropriate" to make this monetary policy shift due to the current state of the U.S. economy, inflation, and wages, Fed Chair Jerome Powell told reporters in December. "Price increases have now spread to a broader range of goods and services," he said.

Another point that stood out was the Fed noting that it won't raise rates until the taper is complete. "Buying assets is adding accommodation, raising rates is removing accommodation. Since we're two meetings away from completing the taper, assuming things go as expected, if we want it to lift off before then, we would stop the taper potentially sooner. But it's not something I expect to happen," Powell said.

Other central banks are also taking on a more hawkish stance, including the Bank of England and Bank of Canada.

"Most central banks will tighten policy next year, but the degree to which our view is priced into markets varies. We expect interest rates in the U.S. to increase at a similar pace to markets next year (and at a faster pace in 2023). But in several other countries, including the UK, Australia, Brazil and South Africa, we think the pace of tightening will be slower than investors currently anticipate. We expect interest rates to remain at their current record lows in the euro-zone and Japan. And we think the People's Bank of China will cut policy rates," said Capital Economics group chief economist Neil Shearing.

The Fed is not likely to abandon its tightening plans in 2022, stressed Capital Economics chief North American economist Paul Ashworth.

"Over the next couple of years, we expect price inflation to remain consistently above the 2% target … The bigger problem now is the clear signs of building cyclical price and wage pressures, which will be much longer lasting. We suspect that core PCE inflation will be higher than the 2.3% Fed officials are now projecting for 2023," Ashworth noted.

Is this a bad environment for gold?

After closing the year down 3.7% — gold's worst year since 2015 — analysts are now split on whether a more aggressive Fed can hurt prices in 2022. Some project a move lower to $1,600 by the year-end, while others are not ruling out a return to record highs.

In the middle of next year, gold will begin its decline back to $1,600 as the Federal Reserve initiates rate hikes to control inflation, Hynes told Kitco News.

"The target for the end of the year is $1,600 for gold and $22 for silver," he said. "It's hard to see what could actually spark another rally, at least in the shorter term. The Fed is going to ease back on purchases. The markets are pricing in a rate hike in the not too distant future. The outlook for the U.S. dollar is sideways. These conditions are not rally-inducing. Other than this inflation story, which continues to get steam, it's probably going to be another period of relatively stable prices."

ANZ is projecting two rate hikes next year as inflation remains elevated through the first half of the year.

"The Fed's ability to contain inflation or bring it back to their comfortable levels of 2%-3% will take some time. For the moment, rate hikes are still a late 2022 story for the market. It'll be that that gap between expectations around tapering asset purchases, which I think are a separate issue compared with the rate hike cycle. That will be the more important factor to look out for the gold market in particular."

J.P. Morgan Global Research issued a report stating that gold will get hurt as the Federal Reserve proceeds to tighten monetary policy, with the first rate hike likely coming in September.

With the outlook of three rate hikes in 2022, the risks for gold are skewed to the downside, said RBC Capital Markets commodity strategist Chris Louney.

"There's still room for that to be gold negative based on market expectations and those things becoming actualities over the course of 2022 — accelerating the taper, probably starting hiking as early as March. And that's why we never really changed our outlook despite gold fluctuating in the $200 range. We haven't seen investors' interest pick up. Our full-year average for gold is $1,695 for 2022," Louney told Kitco News.

However, those bullish on gold say that the precious metal has historically done well during rate-hike cycles.

After the uncertainty around the Federal Reserve's tightening plan has been cleared up, it is gold's time to shine, said Standard Chartered precious metals analyst Suki Cooper.

"Gold prices tend to start firming after the first rate hike in a hiking cycle or tapering announcements as, historically, the market prices in such a move early," Cooper said.

What gold ends up doing around the $1,800 an ounce will be critical since that remains a strong resistance level, she added. Standard Chartered does see gold rising to $1,875 an ounce in the first quarter of next year.

"It wouldn't surprise me if gold bottomed and started to move higher once the Fed completes its tapering faster-than-expected and even moves to raise rates. That might actually be the thing that triggers the move in gold," Eliseo said.

One thing to watch is how inflation expectations change in 2022, he pointed out.

"It is very clear that the current inflationary impulse is going to be far stronger than what the Fed was anticipating only a couple of months ago. There is now an enormous gap between current levels of inflation and where the market thinks inflation is going to be in five or ten years from now," Eliseo said. "If the market starts to get even more of a sniff that inflation will be more permanent, then that's going to start to cause some challenges, both for policymakers and also for investors."