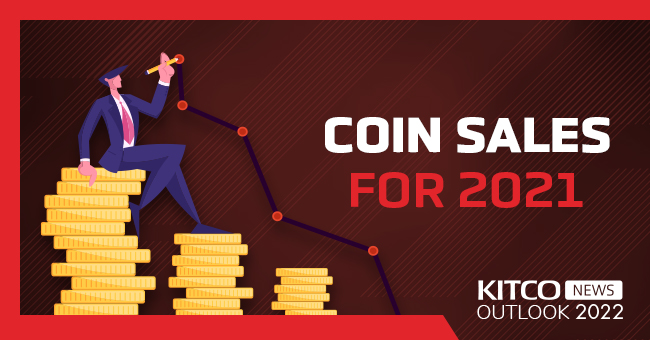 (Kitco News) - Despite gold's uninspiring performance in 2021, the precious metal saw an impressive wave of physical demand throughout the year.

Updated sales data released from the U.S. Mint on Monday showed demand for physical gold hitting its highest level since 2009. The U.S. Mint said that in 2021 it sold more than 1.25 million ounces of gold in various denominations of its American Eagle gold coins, up more than 48% from last year.

According to the sales data, the mint's busiest month last year was in January when it sold 220,500 ounces of gold. Another memorial month for the mint included June when it sold 182,000 gold ounces as gold prices dropped more than $100 in the month as the Federal Reserve signaled that it was looking at reducing its monthly bond purchases before the end of the year.

August was another busy month for the mint as it sold 136,000 ounces of gold. Early in August, the gold market experienced a flash crash, which saw prices drop more than 4% falling to a new low for the year. However, investors were quick to buy on the dip below $1,700 an ounce.

Analysts have noted that physical demand for gold has been strong as investors build strategic positions in their portfolios. Many analysts have said that the precious metal remains an attractive hedge against inflation.

In a press release, Michael Fuljenz, president of Universal Coin & Bullion, and who was named 2021 American Numismatic Association Dealer of the Year, said that his bullion company saw a lot of new customers take an interest in gold last year.

"The recent volatility in the Dow and Russell 2000 indexes are a reminder that gold is the only proven stable form of money for over 3,000 years,” he said in a press release. "With rising federal spending and deficits, plus rising inflation and global uncertainty, I predict that gold prices will return to over $2,000 in the year 2022, and silver could go to $27 per ounce.”

While the gold market saw demand reaching its highest level in more than a decade, the silver market underperformed.

Similar to gold, silver demand started the year off strong, with more than 12 million silver ounces sold in the first quarter. Silver demand was solid at the start of the year as the market was swept up in the social media meme-stock craze. Investors organized through social media tried to create a short squeeze in the silver market, which ultimately failed.

In other precious metal bullion coins, the U.S. Mint sold 75,000 ounces in platinum coins in 2021, up 32% from last year. Demand for physical platinum increased to its highest level since 1998.

The undervalued precious metal is attracting new investor attention as the green energy transition continues to evolve, said the World Platinum Investment Council in recent interviews. One area of platinum demand that is attracting attention is the growing hydrogen economy. Platinum is a critical metal used to separate hydrogen and oxygen in the water. The hydrogen is then used to generate power. It can also be used in fuel cells to power vehicles.